The Coming Armageddon: Religion vs. Non-Religion 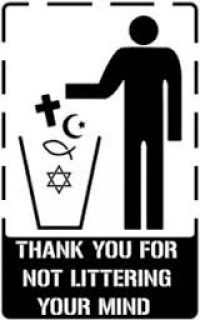 According to a story at CNN.com this morning, “Islam, the world's fastest-growing faith, will leap from 1.6 billion (in 2010) to 2.76 billion by 2050, according to the Pew study. At that time, Muslims will make up nearly one-third of the world's total projected population of about 9 billion people.

“Christianity is expected to grow, too, but not at Islam's explosive rate. The Pew study predicts Christians will increase from 2.17 billion to 2.92 billion, composing more than 31% of the world's population.

“This means that by 2050, more than 6 out of 10 people on Earth will be Christian or Muslim.” READ FULL REPORT HERE

REMNANT COMMENT: Interesting! Lowly Islam—disorganized, warring tribes, without even a claimant to the position of visible head— giving its ancient nemesis, Christianity, a serious run for its money.

Isn’t it something how faith really can move mountains, even the false variety. But poor old beleaguered Christianity doesn’t stand a chance this time around. Thanks to the debilitating and faith-destroying Spirit of Vatican II, the Crescent looms high over the Cross.

What this report does not touch on, by the way, is the almighty power of raw secularism, which at the moment seems to be dominating the world and its “great monothesitic religions”. How did we end up with homosexual ‘marriage’, for example, in a world inhabited by practitioners of religions that oppose it in peril of their souls?

If you want something to fear in the future you needn’t look to religion but rather to that Ape of God, to irreligion, to the supreme deity worshipped by the practitioners of unholy militant Secularism (read: atheism). Now that’s the stuff of global nightmares!