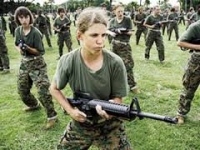 And Women Warriors, Too!
Jacqueline Klimas of the The Washington Times writes: "Soon there may only be atheists in the foxholes. Christians are leaving the U.S. military or are discouraged from joining in the first place because of a "hostile work environment" that doesn't let them express their beliefs openly, religious freedom advocates say. Michael Berry, senior counsel at the Liberty Institute, a Texas-based legal organization dedicated to defending religious liberty in America, said recent high-profile cases of military chaplains facing punishment for private counseling sessions that reflected the teachings of their religion could cause devout Americans who are qualified for military service to think twice about joining the military." READ FULL ARTICLE HERE

REMNANT COMMENT: I wonder which neo-barbarian hordes are going to crush America first. Well played, by the way, liberal elites!  You and your militant secularism are transforming the U.S. Military into a place fit for murderers, rapists and criminals.  Support the troops? Really?

[Comment Guidelines - Click to view]
The Remnant values the comments and input of our visitors. It’s no secret, however, that trolls exist, and trolls can do a lot of damage to a brand. Therefore, our comments are heavily monitored 24/7 by Remnant moderators around the country.  They have been instructed to remove demeaning, hostile, needlessly combative, racist, Christophobic comments, and streams not related to the storyline. Multiple comments from one person under a story are also discouraged. Capitalized sentences or comments will be removed (Internet shouting).
The Remnant comments sections are not designed for frequent personal blogging, on-going debates or theological or other disputes between commenters. Please understand that we pay our writers to defend The Remnant’s editorial positions. We thus acknowledge no moral obligation whatsoever to allow anyone and everyone to try to undermine our editorial policy and create a general nuisance on our website.  Therefore, Remnant moderators reserve the right to edit or remove comments, and comments do not necessarily represent the views of The Remnant.
back to top
Last modified on Saturday, April 18, 2015
Tweet

More in this category: « The Coming Armageddon: Religion vs. Non-Religion Will Francis Break the Catholic Church? »