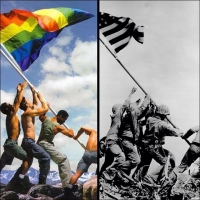 This from World Net Daily: "The state of Kentucky has begun imposing a religious test on volunteer pastor counselors in its youth division, insisting that they refrain from calling homosexuality “sinful” and dismissing those who cannot bend their religious faith to accommodate the state requirements. The policy was uncovered by Liberty Counsel, which has sent a letter to Bob Hayter, commissioner of the Kentucky Department of Juvenile Justice, demanding that the state religious test be dropped and that a dismissed counselor be reinstated.

“Liberty Counsel writes regarding the blatantly unconstitutional revocation of volunteer prison minister status of ordained Christian minister David Wells, who has provided voluntary spiritual counseling and mentorship to juvenile inmates under the control of the Department of Juvenile Justice. … This revocation was issued by Warren County Regional Juvenile Detention Center on the basis of the April 4, 2014, DJJ Policy 912, which mandates full DJJ support of homosexuality and transvestism.

“With no evidence of any violation of DJJ policy on Mr. Wells’ part, his volunteer status was revoked by the Warren RJDC superintendent because he could not sign a state-mandated statement that homosexuality was not ‘sinful,’ among other things,” the letter said.

The policy states that DJJ staff, volunteers and others “shall not imply or tell LGBTQI juveniles that they are abnormal, deviant, sinful or that they can or should change their sexual orientation or gender identity.” Read more

REMNANT COMMENT: Counter-Christian or Christophobia is no laughing matter.  State by State, city by city, institution by institution-- at some point, if you hold Christian values, you will become a social pariah and subsequently put into a status place of rejection.  It may mean paying  fines or jail time as many an Operation Rescue Pro-Lifer can tell you; they have experienced the loss of their First Amendment rights and police brutality and you're next.   It may even go beyond Church, school and employment and it is certain to become the law of our pitiable land.

Christians need not apply; unless they sign a gag order. Welcome to the USSA (the United Sodomitical States of America)

[Comment Guidelines - Click to view]
The Remnant values the comments and input of our visitors. It’s no secret, however, that trolls exist, and trolls can do a lot of damage to a brand. Therefore, our comments are heavily monitored 24/7 by Remnant moderators around the country.  They have been instructed to remove demeaning, hostile, needlessly combative, racist, Christophobic comments, and streams not related to the storyline. Multiple comments from one person under a story are also discouraged. Capitalized sentences or comments will be removed (Internet shouting).
The Remnant comments sections are not designed for frequent personal blogging, on-going debates or theological or other disputes between commenters. Please understand that we pay our writers to defend The Remnant’s editorial positions. We thus acknowledge no moral obligation whatsoever to allow anyone and everyone to try to undermine our editorial policy and create a general nuisance on our website.  Therefore, Remnant moderators reserve the right to edit or remove comments, and comments do not necessarily represent the views of The Remnant.
back to top
Last modified on Thursday, July 30, 2015
Tweet
More in this category: « Senator James Lankford for President! No Hate Crime Here (Only Christian Churches Bombed) »