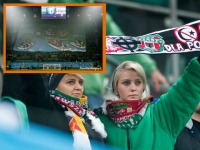 This today from Breitbart:

Just a week after Poland voted to kick out every left-wing member of it’s national parliament, ordinary Poles have again shown the spirit which led them to elect the nationalist conservative Law and Justice party, with football fans unveiling an over-sized anti-migration banner at Sunday’s match. FULL REPORT HERE

REMNANT COMMENT: It might be a little soon for this but I'm going to do it anyway--with a wish and prayer for the resurrection of Catholic Poland.

More in this category: « Ross Douthat for President! (Letter to the Catholic Academy) On the Terrorist Attacks and the Kingship of Christ »