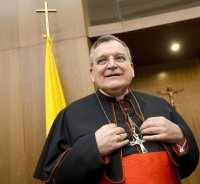 From Cardinal Burke’s own mouth to Vatican journalist Edward Pentin: His part-time reinstatement means no delay for the impending correction.

Edward Pentin/ National Catholic Register/ Oct. 3, 2017: Cardinal Raymond Burke has said his appointment last week as a member [not his old role of prefect] of the Supreme Tribunal of the Apostolic Signatura, the Church’s highest judicial authority, is not a full-time position but will allow him to serve as one of the court's judges when requested.

“Some of the faithful have misunderstood the appointment, thinking that I am now returning to serve full-time in the offices of the Apostolic Signatura,” Cardinal Burke said in an Oct. 2 statement responding to enquiries from journalists. “Members of the Roman dicasteries, apart from the prefect, do not serve full-time but offer their assistance, when it is requested by the prefect.”

...Throughout the dispute over the issue, the cardinal has stressed he is acting on his conscience, for the good of the Church, the papacy and the individual souls of the faithful.

“The urgency of a response to the dubia derives from the harm done to souls by the confusion and error, which result, as long as the fundamental questions raised are not answered in accord with the constant teaching and practice of the Church,” Cardinal Burke said in the interview.

“The urgency weighs very heavily on my heart,” he said, adding he has seen “a great deal of confusion, also people feeling that the Church is not a secure point of reference.”

The cardinal said his appointment will not change, or delay, his plans to issue a fraternal correction of the Pope if the Holy Father continues not to respond to the dubia. Read the entire report HERE

REMNANT COMMENT: Pray for Cardinal Burke. This is far from over.

[Comment Guidelines - Click to view]
The Remnant values the comments and input of our visitors. It’s no secret, however, that trolls exist, and trolls can do a lot of damage to a brand. Therefore, our comments are heavily monitored 24/7 by Remnant moderators around the country.  They have been instructed to remove demeaning, hostile, needlessly combative, racist, Christophobic comments, and streams not related to the storyline. Multiple comments from one person under a story are also discouraged. Capitalized sentences or comments will be removed (Internet shouting).
The Remnant comments sections are not designed for frequent personal blogging, on-going debates or theological or other disputes between commenters. Please understand that we pay our writers to defend The Remnant’s editorial positions. We thus acknowledge no moral obligation whatsoever to allow anyone and everyone to try to undermine our editorial policy and create a general nuisance on our website.  Therefore, Remnant moderators reserve the right to edit or remove comments, and comments do not necessarily represent the views of The Remnant.
back to top
Last modified on Thursday, October 5, 2017
Tweet