The 'God of Surprises' is an Angry Feminist 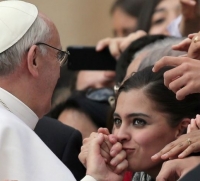 VaticanNews.com summarized a recent Pope Francis homily as a reflection on the many different ways in which women are exploited in today’s society:

The Pope reminded his listeners that women are what men on their own lack to be the image and likeness of God.  He explained how Jesus’ words about women were radical and ground-breaking and “changed history.”  This was because up until then, a woman was considered “a second class citizen,” she was “enslaved” and “did not even enjoy complete freedom,” he said.

Jesus' doctrine about women changes history. Before Jesus the view about women was one thing but after Jesus they are another. Jesus dignifies women and puts them on the same level as men because he takes that first word of the Creator, both are "the image and likeness of God", both of them; not first the man and then a little lower down the woman, no, both are. And a man without a woman beside him - whether as a mother, as a sister, as a bride, as a working companion, as a friend - that man by himself is not the image of God.

Woman today are objects of desire even in our own societies

This is a sin against God the Creator, rejecting women because without her we men cannot be the image and likeness of God. There is an anger and resentment against women, a nasty anger. Even without saying it... But how many times do young women have to sell themselves as disposable objects in order to get a job? How many times? "Yes, Father, I heard in that country...". Here in Rome. There’s no need to go far away.

Look around us to see that exploitation

All this happens here in Rome, it happens in every city, anonymous women, women - we can describe as "faceless" because shame covers their faces, women who do not know how to laugh and many of them do not know the joy of breastfeeding their baby and the experience of being a mother.  But, even in our everyday life, without going to those places, there is this ugly way of thinking, of rejecting women or seeing her as a "second class" person.  We need to reflect more deeply about this.  And by doing this or saying this, by entering into this way of thinking, we despise the image of God, who made man and woman together with his image and likeness. This Gospel reading helps us to think about the marketing of women, a trade, yes, trafficking, that exploitation which is visible but also that trade which we can’t see but is taking place out of sight. A woman is trampled underfoot precisely because she is a woman.

COMMENT: Question for His Holiness: Does this include exploiting women for your own political agenda? #LadyDeacons

[Comment Guidelines - Click to view]
The Remnant values the comments and input of our visitors. It’s no secret, however, that trolls exist, and trolls can do a lot of damage to a brand. Therefore, our comments are heavily monitored 24/7 by Remnant moderators around the country.  They have been instructed to remove demeaning, hostile, needlessly combative, racist, Christophobic comments, and streams not related to the storyline. Multiple comments from one person under a story are also discouraged. Capitalized sentences or comments will be removed (Internet shouting).
The Remnant comments sections are not designed for frequent personal blogging, on-going debates or theological or other disputes between commenters. Please understand that we pay our writers to defend The Remnant’s editorial positions. We thus acknowledge no moral obligation whatsoever to allow anyone and everyone to try to undermine our editorial policy and create a general nuisance on our website.  Therefore, Remnant moderators reserve the right to edit or remove comments, and comments do not necessarily represent the views of The Remnant.
back to top
Last modified on Saturday, June 16, 2018
Tweet

More in this category: « Putin Less Than Impressed with Culture of Death Trump Receives Scapular, Our Lady of Fatima Credited for Korean Peace »