Last week President Trump received a scapular and a lesson on Fatima from Edward Baza Calvo, governor of Guam since 2011.

"About 165,000 people have taken a big sigh of relief since ten months ago the leader of North Korea was making pronouncements of the nuclear annihilation of our island," says Gov. Calvo in the short clip below from PacificDailyNews.com. "And now we have, ten months later, a document paving the way--signed by both [Trump and Kim Jong-un]--to peace and denuclearization,"

A year ago, when this crisis was unfolding, the traveling Lady of Fatima had just come from Korea to Guam, and fifteen minutes after Trump signed the agreement with Kim Jong-un, the statue arrived at the house of Governor Calvo. Being Catholic, he said, "I don't believe in coincidences."

In gratitiude to both Our Lady of Fatima and the U.S. President, Gov. Calvo handed Trump a scapular and told him that Catholics, such as Melania, would understand its significance. 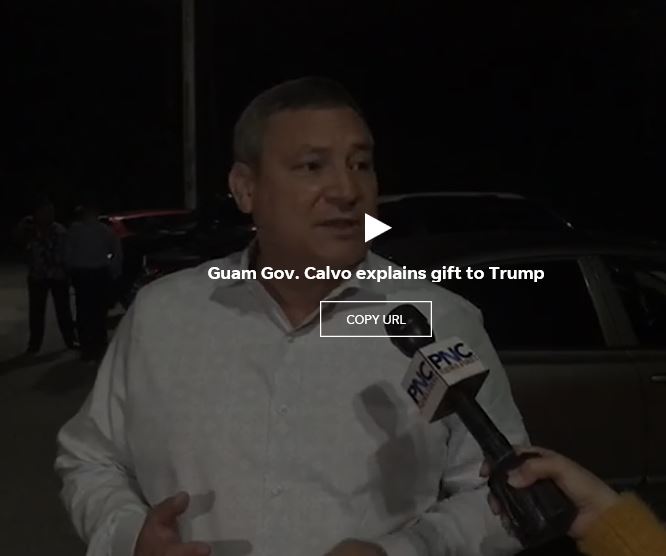 COMMENT: Well, now we know he knows the rest of the story. What will happen next?  God only knows.  But as most of the human element of the Catholic Church have now betrayed their convenant with Almighty God, it remains to be seen who God will choose as recepient of His Grace to continue His work in the world.  I have a feeling we might all be surprised at who from the highways will answer the call and come to the Lord's feast.

Please pray for the conversion of President Donald Trump. And let's also pray for the First Lady, that God will open her heart to the truth of the Church into which she was baptized.

May Our Lady of Fatima watch over them both, guide them and eventually open their hearts to the Way, the Truth and the Light.  Unlikely? Perhaps, but with God's grace anything is possible.

[Comment Guidelines - Click to view]
The Remnant values the comments and input of our visitors. It’s no secret, however, that trolls exist, and trolls can do a lot of damage to a brand. Therefore, our comments are heavily monitored 24/7 by Remnant moderators around the country.  They have been instructed to remove demeaning, hostile, needlessly combative, racist, Christophobic comments, and streams not related to the storyline. Multiple comments from one person under a story are also discouraged. Capitalized sentences or comments will be removed (Internet shouting).
The Remnant comments sections are not designed for frequent personal blogging, on-going debates or theological or other disputes between commenters. Please understand that we pay our writers to defend The Remnant’s editorial positions. We thus acknowledge no moral obligation whatsoever to allow anyone and everyone to try to undermine our editorial policy and create a general nuisance on our website.  Therefore, Remnant moderators reserve the right to edit or remove comments, and comments do not necessarily represent the views of The Remnant.
back to top
Last modified on Monday, June 18, 2018
Tweet

More in this category: « The 'God of Surprises' is an Angry Feminist BUSTED! SPLC Fake News Costs Them Millions »