(ROME) This morning I went to Mass in St. Peter’s. We’ve been hearing rumors for years that indeed the Traditional Latin Mass is no longer difficult to find on any one of its numerous altars, and even every day; but, naturally, I was eager to confirm this for myself.

I wasn’t inside for more than a moment when I discovered a traditional Mass that had just begun at the prominent Altar of the Transfiguration, wherein rest the mortal remains of Pope Innocent XI.

I knelt down and heard Mass, which the celebrant offered to perfection. After Mass I chatted with him for a moment.  He was filling in for the regular celebrant, but is a diocesan priest from Peoria, Msgr. Soseman, who (I later learned) enjoys a reputation as a learned and holy priest here in Rome.  He couldn’t have been more congenial. Yes, he confirmed, the Traditional Latin Mass is indeed being celebrated every day in the Basilica of St Peter. Who would ever have imagined such a thing! Thank you, Pope Benedict.

On Tuesday the conclave will begin with an hour-long procession of cardinals from the Pauline Chapel into the Sistine Chapel, beginning at 4:30.  No cameras will be allowed once the doors of the Sistine are closed.

Since that is the case, Marco Bruno of the Vatican Press Office was kind enough to lead a handful of journalists into the Sistine Chapel for a final media viewing before it is sealed (See above photo).  I was fortunate enough to be included in that company.  We were able to observe firsthand the preparations for the momentous event. It was indeed a privilege and it would be difficult to exaggerate our appreciation for the kindness of everyone at the Sala Stampa, who, obviously, have a massive job on their hands with over 5,000 members of the press here in Rome. Video of our visit to the Sistine is available at www.facebook.com/TheRemnantNewspaper

One of the things that struck me while inside the Sistine was the evidence of so many precautions being taken to prevent breaches of secrecy at the conclave, which of course would also involve the breaking of a solemn oath.  No effort is being spared to prevent cardinal electors from having any opportunity to tweet or text hints about the proceedings of the conclave.  In fact, the Sistine Chapel was being outfitted with devises designed to cut off cell and internet signals completely.

We’d noticed the same thing in the Holy See’s media center, which was on virtual Internet lockdown so as to prevent any cardinal from communicating to the outside during the congregation meetings last week, especially to members of his own country’s media which would have the potential to propel a given cardinal into a media-driven campaign to become “nominee”, so to speak.

It’s astonishing to think that we’ve evidently arrived at the point now where some princes of the Catholic Church cannot necessarily be trusted even to keep their word on a matter as serious as a papal conclave.  Is this, I wondered, the very tiny tip of the iceberg which gives us perhaps some inkling of what Pope Benedict himself was up against in the months and years leading up to his decision to abdicate? After all, wolves can't be trusted under any circumstances.

Why Did Benedict Abdicate?

Perhaps Benedict decided that the good of Church obliges an aging Pope to abdicate before his mental faculties begin to fail, especially  when surrounded by men who cannot be trusted even to keep their word.  Given all we know about one or two of them maybe he had a point in this case.  It’s no secret that Pope John Paul, for example,  “did” and “said” all sorts of bizarre things at the end of his reign that were less than good for the life of the Church.  The so-called “new Rosary” comes to mind.

True, Benedict should have done more to root out the worst of the troublemakers, but how can anyone ever know what in fact he did or didn’t do and to what extent he was blocked from doing more. His power may indeed have ended at the door of his office.

God help the next pope, whoever he is.

When it comes to Benedict’s abdication, strong expressions of disappointment among faithful Catholics here in Rome are not hard to find. Street vendors, Mass goers, priests, even great admirers of the Holy Father will readily speak of their frustration over the decision.

Even among some of the progressives there’s a sense that their parade was just rained out. After all, during Pope John Paul’s last years, when he was really failing, it must have been great fun being part of the “Pope by Committee”.

In any case, Cardinal Sodano evidently intends to implement a law that will require future popes to swear an oath against abdicating.  Whatever his reasons, on the surface at least, this seems like a good idea. The last thing the Church needs as a rule are mere temporary occupants of the Chair of Peter, coming and going on a whim.

Benedict’s abdication is not popular in any camp, save perhaps the rabid liberals, fruits and flakes (but who cares about that). In fact, there’s an odd little rumor being bandied about which, while preposterous, doesn’t seem to want to go away.  Supposedly there are some cardinals who would even try to reelect Benedict. While unthinkable, it speaks to the level of respect Benedict still enjoys among serious churchmen that even still he is regarded as best qualified to fix this colossal Vatican quagmire.

Speaking of that quagmire, the three cardinals commissioned by Pope Benedict to investigate the documents leak from the Pope’s own desk last year (which resulted in the so-called “Vatileaks” scandal) – Cardinals Julian Herranz, Jozef Tomko and Salvatore de Giorgi—are in a position to become the Big Three in all the deliberations leading up to the conclave, at least when it comes to who will absolutely not be the next pope.  Since they know better than anyone who is most unworthy to ascend to the chair of St. Peter,  they presumably have become a force with which to be reckoned in all the pre-conclave meetings, private or otherwise. After all, they uncovered enough evidence of corruption and abuse of power and money to fill a 300-page dossier, which Benedict ordered sealed and presented to the next pope.

So, this is far from over, and Benedict may yet prove to have been instrumental in cleaning out those stables.   His three confidants and their dossier will most surely impact the conclave, just as they will provide for the next pope to be “armed and dangerous” where the worst of the worst are concerned. Thanks to this dossier, the next pope will have the goods on everyone involved, which is another reason to thank God for the butler, Paolo Gabriele.

Gabriele is the man chiefly responsible for the Vatileaks in the first place; and he’s insisted that he leaked the information solely for the purposes of protecting the Pope whom he loved very much. He is a family man and by all accounts a good and faithful Catholic. He received not one thin euro for the leak and ended up in prison for his trouble.

That Pope Benedict promptly pardoned him at least suggests His Holiness understood and accepts that the butler was only trying to help expose the wolves Benedict himself had asked the world to pray against at the very beginning of his pontificate.

Who’s the Next Pope?

One name that keeps popping up is Angelo Cardinal Scola, Patriarch of Venice. Leaving aside whatever negatives he may have on his resume, one thing is certain: Cardinal Scola is not unfavorable to the Traditional Latin Mass.  Traditionalists here in Rome are thus adamant that the Church could do worse, and that we would have every reason to hope for the best, at least where Benedict’s liturgical restoration projects are concerned.  It’s a name to add to the prayer list, anyway, and an Italian one at that.

I leave you with this image of the incorrupt St. Pope Pius X which I took yesterday in St. Peter’s. May he intercede on behalf of the Church he served so well but which is now undergoing an ignominious passion not unlike that of her Divine Spouse as He ascended the hill of Calvary. 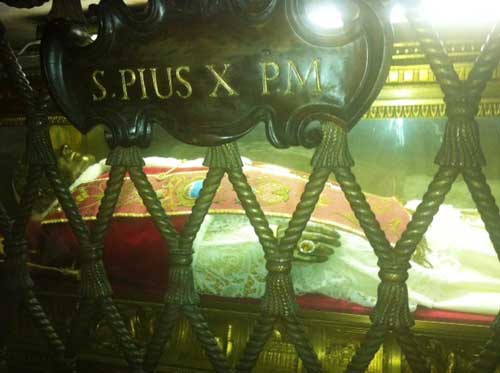 More in this category: The Sistine Awaits »