The Diocese of Manchester, New Hampshire (whose Bishop Peter Libasci was absolutely “thrilled” with Amoris Laetitia), has declared the St. Benedict Center to be entirely un-Catholic, evidently for taking too strict a view on extra ecclesiam nulla salus--the Catholic Church infallibly-defined dogma of no salvation outside the Church.

The sanctions imposed on the St. Benedict Center this January include:

- Prohibition from using the name Catholic in any way or manner that implies a relationship of authenticity or legitimacy with the Roman Catholic Church.

- Prohibition from teaching, presenting or interpreting Roman Catholic Church teachings by the St. Benedict Center, the Slaves of the of the Immaculate Heart of Mary and their associates...

- Obligation to amend the articles of agreement of the Saint Benedict Center, Inc., as submitted to the New Hampshire secretary of state on August 24, 2001, to reflect the prohibition from presenting itself as Catholic...

- No priest will validly hear confession and impart absolution at the St. Benedict Center property, with the sole exception of the case of a penitent in imminent danger of physical death...

Pretty rigid stuff!  We wonder where the Pope of Mercy would come down on such ecclesial exclusivity.  Shouldn't the Church of Accompaniment be, well, accompanying the St. Benedict Center, rather than casting them into outer darkness?  Can it possibly be that our brothers and sisters up in New Hampshire are too Catholic to qualify for accompaniment?

So, this more or less sums up the doctrinal sticking point for the Diocese of Manchester:

Trouble is, this isn't the Saint Benedict Center. This is St. Augustine of Hippo in his Sermo ad Caesariensis Ecclesia plebem. The St. Benedict Center's 'doctrinal rigidity' reflects the teaching of St. Augustine (and the Church's own dogmatic teaching on salvation) a good bit more accurately than does the Diocese of Manchester.

But, what did St. Augustine know? He was only a Father of the Church who didn't have the benefit of Vatican II to help set him straight.

We've finally arrived at the point of Modernist ludicrous where even Fathers and Doctors of the Church need to be silenced so the post-conciliar Church's love affair with the modern world doesn't go south.

No salvation outside the Church may have been fine for pre-conciliar saints, popes, virgins and martyrs but these days even the Bishop of Rome begs to differ, so enlightened is he. Pope Francis enjoys a nice ecumenical prayer service as much as the next guy. He even co-hosted one in Lund, Sweden, in commemoration of the 500th Anniversary of the Protestant Revolt:

So much for the infallibly-defined dogma, extra ecclesiam nulla salus (which, by the way, is still on the books and which all Catholics still must affirm under pain of mortal sin). Go figure!

Looks like we all had better come up with a new name for ourselves, since "Catholic" is evidently reserved for those who aren't really all that Catholic.

I don't agree with everything the so-called Feeneyites say, by the way. Over the years, we've had our differences over Baptism of Desire and Blood to be sure. But at least they're not heretics. Their "crime" is to defend dogmas, not deny them like the good little Catholics in Novus Ordo Land are wont to do. They may sound "extreme" but that's only by the standards set by the Church of Accompaniment, which doesn't really stand for anything at all, and so makes all things Catholic seem pretty extreme by comparison.

A few caveats notwithstanding, St. Pius X would recognize the Father Feeney position as remarkably similar to his own and, for that matter, remarkably dissimilar to that of the Diocese of Manchester.

In any case, don't be too sure that your thin theological disagreement with the St. Benedict Center will spare your family similar persecution. At the end of the day, your brother Catholics are being accused, essentially, of being too Catholic. And that does not bode well for any of us.

Today it’s the St. Benedict Center under the gun; tomorrow it’ll be The Remnant, the FSSP and pretty much anyone else who believes Christ founded only one true Church as the sole means of salvation, which is the Catholic Church.

Pretty soon, as far as the modern Church is concerned, simply holding any conservative opinions at all will make Catholics ineligible to lay claim to the name Catholic. And God help you if you think President Trump should build his wall.

You get the trajectory?

By the way, the same Diocese that's got itself all worked up over the St. Benedict Center claiming to be Catholic evidently has no problem with Father James Martin making the same claim and within the same precincts.

Manchester's  Catholic College of St. Anselm recently brought in Father Martin to speak to their superintendents and principals on the subject of -- wait for it -- building a bridge to the LGBT community: 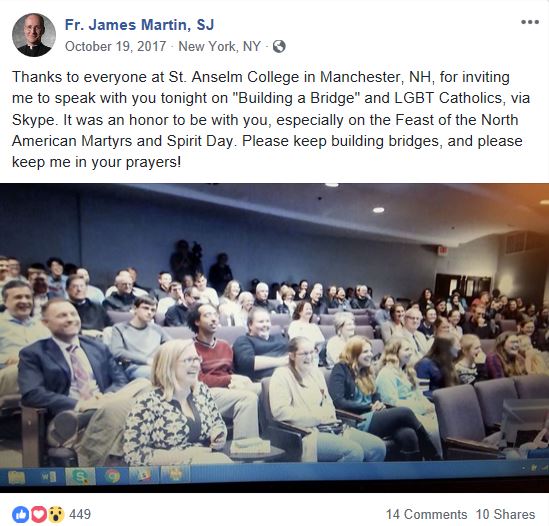 Evidently, Father Jimmy is A-Okay in Manchester, even though Cardinals Raymond Burke and Robert Sarah (and Archbishop Charles Chaput) have publicly accused this bizarre little man of proactively opposing Catholic teaching on Faith and Morals:

The Bishop of Manchester is not some wild-eyed liberal, either. He's even been supportive of the traditional Mass movement in his diocese. . .  which makes this bizarre double standard all the more troubling.

Better keep an eye on what happens to the Saint Benedict Center. Your Traditional Latin Mass center or home-school co-op may be the next group ordered by a Catholic bishop to cease calling itself  "Catholic".

The Catholic purge is evidently coming. But, be of good cheer. If they want to start throwing Catholics out of their own churches again, so be it. There's glorious precedent for that, too:

"Thus, the more violently they try to occupy the places of worship, the more they separate themselves from the Church. They claim that they represent the Church; but in reality, they are the ones who are expelling themselves from it and going astray. Even if Catholics faithful to Tradition are reduced to a handful, they are the ones who are the true Church of Jesus Christ." - St. Athanasius

[Comment Guidelines - Click to view]
The Remnant values the comments and input of our visitors. It’s no secret, however, that trolls exist, and trolls can do a lot of damage to a brand. Therefore, our comments are heavily monitored 24/7 by Remnant moderators around the country.  They have been instructed to remove demeaning, hostile, needlessly combative, racist, Christophobic comments, and streams not related to the storyline. Multiple comments from one person under a story are also discouraged. Capitalized sentences or comments will be removed (Internet shouting).
The Remnant comments sections are not designed for frequent personal blogging, on-going debates or theological or other disputes between commenters. Please understand that we pay our writers to defend The Remnant’s editorial positions. We thus acknowledge no moral obligation whatsoever to allow anyone and everyone to try to undermine our editorial policy and create a general nuisance on our website.  Therefore, Remnant moderators reserve the right to edit or remove comments, and comments do not necessarily represent the views of The Remnant.
back to top
Last modified on Monday, January 14, 2019
Tweet