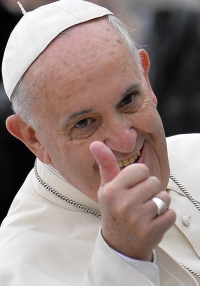 If we hope to continue to enjoy our freedoms, this insidious papacy must be exposed and stopped.
______

Plug in Bergoglio’s hollow ramblings  into a word cloud generator, and VOILA, up pops visual representations of his lightweight linguistics. The larger the font, the more often he repeats the word. The word cloud below appears to be trite New Age platitudes, resembling former presidential candidate, Marianne Williamson.

Instead, it’s the official papal statement on the Global Education Compact event set for October 11-18, 2020 in Rome. This Vatican sponsored global education event is held for the youth. Perusing this Papal statement sounds like reading a UN document. Francis never utters the word, Catholicism. This is especially troubling, since the lavish event is specifically designed for young people who will apparently, be deprived of their faith and religion during the grand festivities.

The Francis statement illustrates his sophomoric superficiality, his insidious religious re-engineering,  and the dangerous political agenda of this papacy. Francis’ words expose his devious plot to replace Catholicism with humanism. In the document, he blatantly admits that he hopes “to create a new humanism” and, later states “to nurture the dream of a new humanism.”  Pay attention to the masonic goal articulated by Francis: Humanism! 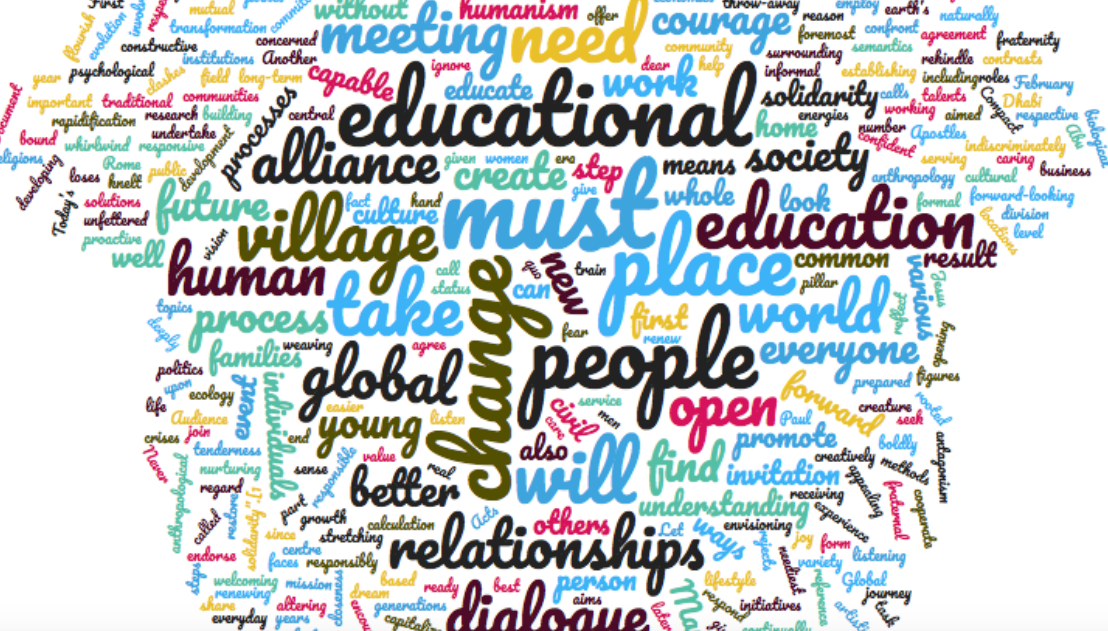 Recognize that his utopian imagery and euphemistic language is illusory and bankrupt.

Note his use of new age pablum, which is bereft of Catholic dogma and teaching. Keep a wary eye on his frequent use of the UN environmental and socialism talking points. It sounds heroic, but it’s pure unadulterated totalitarianism.

Francis is on a political power trip to advance the globalist agenda and to radically transform the Catholic Church. Up until now, he has been given a pass because he self-identifies as the “merciful pope” who “dialogues” and is “transparent,” none of which is true.

Bergoglian banter is fraught with the linguistic lies, rife with amorphous supernaturalist and holistic gobbledygook, which promotes his raw political globalist agenda of anti-Catholic humanism.  Scan his phrases with a critical and discerning eye, ever vigilant for the crass political propaganda camouflaged as merciful Catholic social justice.

Like all propagandists, he repeats the same trite words  in his documents and speeches. Here is a short list of his all time favorites.

Note the banality and emptiness of these words:

Increasingly, Bergoglio chants globalist talking points, i.e. “give a soul to tomorrow’s economy.” The term sounds unintelligible, but nevertheless, benign and inspirational. Since when does an economy have a soul? It doesn’t. It can’t. But in Francis’ tomorrow, the economy will have a soul. Translation: Socialism.

Why does he frequently use the word, COMMON? Why is his use of common a sign of  something insidious and alarming?

The roots of the word communist are in the Latin word, communis meaning “common” or “shared.” These meanings apply to the ideal of Communism which means that every person is equal, and no one has more than anyone else.

Notice how often Bergoglio sprinkles papal documents with the word, COMMON, or how often he uses shared and common in his official papal exhortations. These are code words that signal his advocacy for economic socialism and communism. It should be obvious by now that he uses the powerful papal pulpit to advance a radical political agenda.

Why be so vigilant and expose his language? At first blush, the words sound benign, flowery, and emotional, albeit, trite and unthreatening. However, it is intentionally deceptive to lure Catholics into complacency and to unwittingly accept a radical socialist agenda. Acquiescence to radical change is best achieved with the steady drumbeat of compassionate-sounding chatter full of utopian promises. Once embraced, reality is a stark departure from blissful utopia.

Upon further review, there lies a darker meaning and a sinister agenda burrowed in his words of propaganda.

After 7 years, a dangerous pattern is emerging from this papacy. The papal disguise is gone, as Bergoglio blatantly promotes the UN Agenda 21 of environmentalism, socialism, and globalism. His beloved commandments are not the Biblical 10, but rather the 17 UN Sustainable Development (Depopulation) Goals which he incessantly promotes as models of good citizenship and global governance.

How do Catholics fight this propaganda machine at the highest level of the Catholic Church?

We are in an ideological war of ideas in our culture and in our Church. If we hope to continue to enjoy our freedoms, this insidious papacy must be exposed and stopped. Despite our vast technological resources, the truth remains illusive and requires discernment and wisdom and prayer.

Elizabeth Yore is an international child rights attorney. Her website is YoreChildren.com. She writes for numerous Catholic and secular news outlets and gives speeches on a variety of topics.

[Comment Guidelines - Click to view]
The Remnant values the comments and input of our visitors. It’s no secret, however, that trolls exist, and trolls can do a lot of damage to a brand. Therefore, our comments are heavily monitored 24/7 by Remnant moderators around the country.  They have been instructed to remove demeaning, hostile, needlessly combative, racist, Christophobic comments, and streams not related to the storyline. Multiple comments from one person under a story are also discouraged. Capitalized sentences or comments will be removed (Internet shouting).
The Remnant comments sections are not designed for frequent personal blogging, on-going debates or theological or other disputes between commenters. Please understand that we pay our writers to defend The Remnant’s editorial positions. We thus acknowledge no moral obligation whatsoever to allow anyone and everyone to try to undermine our editorial policy and create a general nuisance on our website.  Therefore, Remnant moderators reserve the right to edit or remove comments, and comments do not necessarily represent the views of The Remnant.
back to top
Last modified on Thursday, April 9, 2020
Tweet