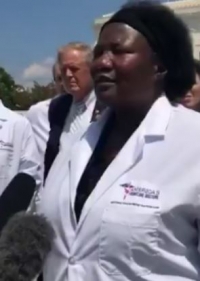 The video garnered over 17 million views during the eight hours it was hosted on Facebook, until it was taken down from Facebook and banned from YouTube.  The video was of  a press conference in D.C., held by the group America’s Frontline Doctors and organized and sponsored by the Tea Party Patriots.

The press conference featured Rep. Ralph Norman (R-SC) and frontline doctors sharing their views and opinions on coronavirus and the medical response to the pandemic.

Why was this controversial? Evidently, all videos that contradict the leftist media’s COVID agenda and fear tactics are being deleted by big social media.

Yesterday’s press conference still appears in full on some platforms, such as BitChute.

What is Big Tech so afraid of? Even liberal NewsWeek ran a story today, making the same arguments about Hydroxychloroquine:

The Key to Defeating COVID-19 Already Exists. We Need to Start Using It."

NBC News reported that late Monday night, Trump retweeted the tweet from Dr. Immanuel, one of the doctors featured in yesterday's presser, that said: "Covid has cure. America wake up."

Twitter said early Tuesday morning, "Tweets with the video are in violation of our COVID-19 misinformation policy."

Trump also retweeted posts defending the use of the drug hydroxychloroquine, including one that accused Dr. Anthony Fauci, a member of the White House coronavirus task force, of misleading the public by dismissing the drug.

Dr. Fauci got a little defensive about Trump’s tweet. "I have not been misleading the public under any circumstances," Fauci responded on ABC's "Good Morning America" on Tuesday morning when asked for his reaction to Trump's retweets.

Dr. Anthony Fauci to @GStephanopoulos: “I don't tweet. I don't even read them so I don't really want to go there. I just will continue to do my job no matter what comes out because I think it's very important.” https://t.co/JgCvhTifYS pic.twitter.com/BJGIqwSjuT

Meanwhile, Dr. Fauci is enjoying his celebrity status while the rest of the country goes through the hell of a psychological lockdown, based primarily on his flip-flopping scientific expertise, which tends to go as far to the left as his baseball:

Juuuust a bit outside, Tony.  #EmbarrassmentoftheYear

[Comment Guidelines - Click to view]
The Remnant values the comments and input of our visitors. It’s no secret, however, that trolls exist, and trolls can do a lot of damage to a brand. Therefore, our comments are heavily monitored 24/7 by Remnant moderators around the country.  They have been instructed to remove demeaning, hostile, needlessly combative, racist, Christophobic comments, and streams not related to the storyline. Multiple comments from one person under a story are also discouraged. Capitalized sentences or comments will be removed (Internet shouting).
The Remnant comments sections are not designed for frequent personal blogging, on-going debates or theological or other disputes between commenters. Please understand that we pay our writers to defend The Remnant’s editorial positions. We thus acknowledge no moral obligation whatsoever to allow anyone and everyone to try to undermine our editorial policy and create a general nuisance on our website.  Therefore, Remnant moderators reserve the right to edit or remove comments, and comments do not necessarily represent the views of The Remnant.
back to top
Last modified on Tuesday, July 28, 2020
Tweet

More in this category: « Post-Christian Vatican to Set up New Parishes for a New Church Polish Prez Re-Elected after Rejecting LGBT Agenda »