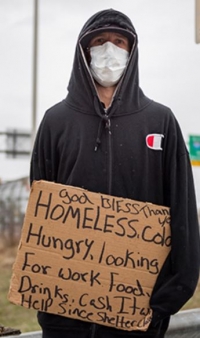 The economy is another way of saying, our lives. No matter what the popular ethos preaches, there is no such thing as a non-essential business.  All businesses are essential for those who work them.

When government says it is safe to go to Walmart, but unsafe to attend church, and when dentists’ offices must close and Planned Parenthood is open for abortions, the mantra of “your health” is a expedient excuse.

All 50 states have made a disaster declaration for the first time in U.S. history.  Twenty-two million have applied for unemployment in a number that grows weekly.  We are a $22 trillion economy subdued by a virus with a mortality rate below 0.30 percent.  Those initial models forecasting more than 2 million deaths were bunk.

Most likely, the virus had been circulating undetected in the U.S. since the end of 2019.  Provided the death toll is analogous to yearly totals for influenza, diabetes, heart and respiratory disease, then it stands to reason that some deaths are being attributed to those already dying.  This would accentuate that the vulnerable need to remain sequestered, but not everyone.

Such information matters, in terms of whether it makes any sense to keep quarantining the general population – an answer easily surmised.  If millions are already infected, the virus won’t be curtailed by forcing them to remain anchored at home.  There are hundreds of millions who have far more to fear from the economic fallout of this lockdown than they have of the virus itself.

Epidemiologists believe the virus will be defeated by a vaccine, and when a herd immunity is finally realized.  Provided the spread has been larger than first understood, we need to get back to business, as any vaccine is most likely a year away.  There is no reason to commit economic suicide for the fear of being infected.

For all the media’s breathless hysteria, the death toll will be the equivalent of a bad flu season. Yet, we don’t jeopardize trillions in wealth, nor millions of jobs when the flu gets bad. Social distancing need not mean economic distancing with the remedy worse than the disease.

Congress produced the mother of all pork-laden spending bills that is paying millions of people more to stay home than to show up at work. Politicians claim the spending will “stimulate” the quarantined economy, but it cannot, because government refuses to stimulate production it has forbidden.

History will prove that these nationwide lockdowns did virtually nothing to stop the spread, but what it did accomplish was to put the brakes on the strongest national economy we have had in generations, while sinking global markets into bear terrain in record time.  Americans worried about their health are now just as anxious about their finances.

The economic effects of these lockdowns are much larger than is being reported, since we are engaged in an adverse national election battle that for all intents and purposes has been ongoing ever since Donald Trump took up occupancy in the Oval Office.  Democrats view continued economic misery as their path to victory and the White House.  With a crashed economy, President Trump stands a much lesser chance of re-election come November.

Politicos remain fearful of moving too quickly that would open themselves up to accusations, no matter how unfair. The outcome of the 2020 elections will be contingent on how swiftly the nation rebounds, economically.  Reviving the economy will be just as urgent an undertaking as fighting any pandemic. Our government, and healthcare infrastructure, are downright dependent on a resilient, robust and growing economy.

The longer these lockdowns drag on, the less there will be to reopen.

Government’s mission is to safeguard our American freedom in our pursuit of happiness, the practice our faith, and the peacefully assembly at work that will ensure that the U.S. economy remains the impetus of global order.

Even the most prejudiced epidemiologist understands the lockdown cure will soon be worse than the virus, imposing economic havoc despite a $2.2 trillion and another $484 billion bailout, where many of those 22 million unemployed are likely to remain.

As President Calvin Coolidge foreseeably said nearly a century ago, “the business of America is business” and the sooner, we get back, the better.

[Comment Guidelines - Click to view]
The Remnant values the comments and input of our visitors. It’s no secret, however, that trolls exist, and trolls can do a lot of damage to a brand. Therefore, our comments are heavily monitored 24/7 by Remnant moderators around the country.  They have been instructed to remove demeaning, hostile, needlessly combative, racist, Christophobic comments, and streams not related to the storyline. Multiple comments from one person under a story are also discouraged. Capitalized sentences or comments will be removed (Internet shouting).
The Remnant comments sections are not designed for frequent personal blogging, on-going debates or theological or other disputes between commenters. Please understand that we pay our writers to defend The Remnant’s editorial positions. We thus acknowledge no moral obligation whatsoever to allow anyone and everyone to try to undermine our editorial policy and create a general nuisance on our website.  Therefore, Remnant moderators reserve the right to edit or remove comments, and comments do not necessarily represent the views of The Remnant.
back to top
Last modified on Wednesday, September 2, 2020
Tweet