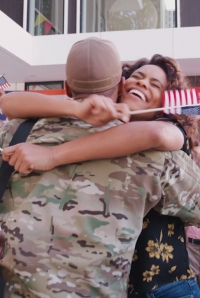 Editor's Note: Shout out to Kate, the vocalist and writer of this powerful new song.

I would encourage you to pay close attention to these very profound lyrics.

Kate tells us she has been sharing Remnant TV videos for a long time, and we're happy to return the favor.

Let's help her get this video out far and wide. MJM

A music video exposing the roots of the radical Left, posted to Facebook last week, is going viral. Titled “Why I’m Walking Away,” the video tells the story of socialist infiltration in the United States, drawing parallels between historical and modern events, and interweaving personal testimony with powerful imagery.

From early feminist and civil rights marches, to the tearing down of statues and burning of buildings, to the erosion of free speech, the video and song paint a sobering yet empathetic picture of the impact of Marxist ideologies, juxtaposed against scenes of hope, unity, and patriotism.

Originally posted in the in the #WalkAway Campaign Facebook group, the video has garnered over 200,000 views, 15,000 likes and 10,000 shares across Facebook and beyond—striking a chord with patriots across the nation, with many commenting that they were moved to tears.

One Facebook user said, “Wow...I don't know where to start! As a American as a military mom, as a #walkaway, as a patriot, as an actor, musician, christian.....I am crying because it has everything I have been trying to say for months. God bless you. I just can't stop crying.”

While another comment read, “Wow!!! I feel this song in my soul!! Exactly everything from the suffrage to the hippies, now antifa, is exactly how we got here, and we've been led to believe their way was the way, but it's actually the complete opposite and only bringing us farther from truth, God, and the meaning of life! Thank you for putting it into the most honest words!! This is THE SONG OF THE TIMES and the last 100 years!!”

Another listener commented, “I cried and cried with pure gratitude for your video. As someone who has been military all my life and whose husband has lost brothers by his side .... it was so beautiful. I love this country and love freedom. Socialism is knocking on our door and this video was just beautiful. Thank you!”

And hundreds of others simply called it “Beautiful,” commenting that they were in tears or that it gave them chills.

The video was produced by Make Music Great Again (MMGA), a grassroots movement aimed at bringing dignity and upright values back into the music industry. Their website boldly states, “The Radical Left Has Taken Over The Music Industry. We’re Taking It Back.”

MMGA’s co-founder, Seth Holehouse, explains, “over the past few decades, a Marxist agenda has infiltrated Hollywood and the music industry, intent on destroying traditional values, the family unit, sexual morality, patriotism, and faith. Music is one of the most important aspects of human culture and it can be used to corrupt or uplift; to divide or unite. In a time when conservative, patriotic Americans have been shunned by popular culture, we’re giving them music that echoes their frustrations, sorrows, hopes, and dreams.”

“This is only the beginning,” he says. “Stay tuned.”

The video can be viewed at: https://youtu.be/ID7G4F0jssM

This email address is being protected from spambots. You need JavaScript enabled to view it.

[Comment Guidelines - Click to view]
The Remnant values the comments and input of our visitors. It’s no secret, however, that trolls exist, and trolls can do a lot of damage to a brand. Therefore, our comments are heavily monitored 24/7 by Remnant moderators around the country.  They have been instructed to remove demeaning, hostile, needlessly combative, racist, Christophobic comments, and streams not related to the storyline. Multiple comments from one person under a story are also discouraged. Capitalized sentences or comments will be removed (Internet shouting).
The Remnant comments sections are not designed for frequent personal blogging, on-going debates or theological or other disputes between commenters. Please understand that we pay our writers to defend The Remnant’s editorial positions. We thus acknowledge no moral obligation whatsoever to allow anyone and everyone to try to undermine our editorial policy and create a general nuisance on our website.  Therefore, Remnant moderators reserve the right to edit or remove comments, and comments do not necessarily represent the views of The Remnant.
back to top
Last modified on Sunday, November 1, 2020
Tweet
More in this category: « Ballot Bonanza and Voter Fraud Archbishop Viganò's Prayer for a Resurgence of Christianity in America and the Re-election of Donald Trump »