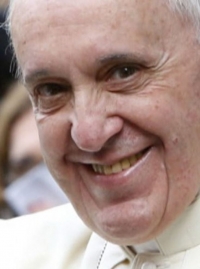 Is there a single issue on which Francis comes down on the Catholic side anymore?  If you want to be a conservative, a patriot, a traditionalist, a regular guy—just do the exact opposite of what this little, diminutive man does. (Yes, despite what you may have seen from the Vatican glamor shot photographer, Francis is actually just over 5’7”, which explains a lot.)

So, when it came to handling COVID, what did the great big man do? Closed down the churches and immediately started talking about the desperate need for a new worldwide post-COVID economy (read “GREAT RESET”).

And then he called up his biographer  to pitch his new book idea: How Pope Francis Responded to COVID Like a UN Toady.  Well, the actual title is even worse: Let Us Dream: A Path to a Better Future

Same thing. Reminds me of Dreams from our Fathers. What’s with these guys and their dreamy little worldview? They’re stuff always sounds like lyrics for an Everly Brothers’ song.

So now there's “Let us Dream”…or is it “Lettuce Dreams”? 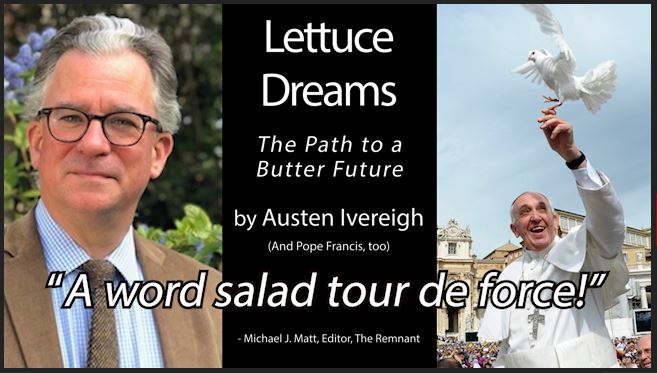 And this new literary bombshell is packed with passive aggressive shots at sincere Catholics and God-fearing patriots, of course.  After all, it’s Francis!

Get a load of this one, aimed at anyone who’d like to be done with the COVID fearmongering like, yesterday:

Some groups protested, refusing to keep their distance, marching against travel restrictions – as if measures that governments must impose for the good of their people constitute some kind of political assault on autonomy or personal freedom.”

Maybe His Holiness would benefit from looking up the definition of freedom?

But then there’s this bit of pompous pontificating against those evil Trump supporters as opposed to the virtuous BLM and Antifa thugs of which Francis and his friends can’t seem to get enough.

You’ll never find such people protesting the death of George Floyd, or joining a demonstration because there are shantytowns where children lack water or education, or because there are whole families who have lost their income,” he said. “On such matters they would never protest; they are incapable of moving outside of their own little world of interests.”

Um… “because there are shantytowns where children lack water or education”?

Can this man be serious?

He can’t believe that, because it’s an absurdity that the “noble poor” are rioting in the streets for the sake of the “shantytowns”. But if they’re allowed to continue, they’ll turn this country into the United Shantytowns of America. No water or education for ANYONE because in some places, somewhere, there are people who don’t have those things!

Righteous! I’d like to give Francis a woke, COVID-mandated elbow bump. Why? Because, safety first! Health Dictators, step in line behind Andy Cuomo (he’s at the Emmy Awards afterparty without his mask or socially distancing), because Francis is all in with the lockdown police:

“With some exceptions, governments have made great efforts to put the wellbeing of their people first, acting decisively to protect health and to save lives.”

God bless you, Francis. You can resign now. I’m not a big fan of papal resignation but, in your case, I think God would understand.

[Comment Guidelines - Click to view]
The Remnant values the comments and input of our visitors. It’s no secret, however, that trolls exist, and trolls can do a lot of damage to a brand. Therefore, our comments are heavily monitored 24/7 by Remnant moderators around the country.  They have been instructed to remove demeaning, hostile, needlessly combative, racist, Christophobic comments, and streams not related to the storyline. Multiple comments from one person under a story are also discouraged. Capitalized sentences or comments will be removed (Internet shouting).
The Remnant comments sections are not designed for frequent personal blogging, on-going debates or theological or other disputes between commenters. Please understand that we pay our writers to defend The Remnant’s editorial positions. We thus acknowledge no moral obligation whatsoever to allow anyone and everyone to try to undermine our editorial policy and create a general nuisance on our website.  Therefore, Remnant moderators reserve the right to edit or remove comments, and comments do not necessarily represent the views of The Remnant.
back to top
Last modified on Thursday, November 26, 2020
Tweet