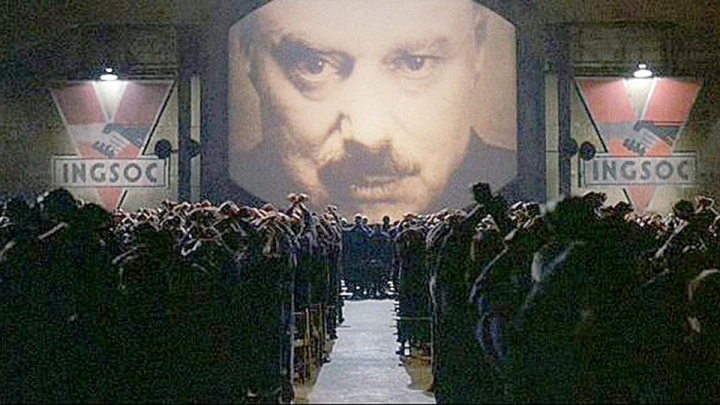 It read like a chapter out of George Orwell’s dystopian novel, “1984.”

USA Today reported how the Capitol Rotunda’s portraits of the Declaration of Independence, the U.S. Constitution, and the Bill of Rights, “lauds wealthy White men in the nation’s founding while marginalizing BIPOC (Black, Indigenous and other People of Color), women, and other communities.”

In other words, the Rotunda’s longstanding artwork and cultural artifacts are just more paradigms of “structural racism.”

The report calls for “the creation of safe spaces in every NARA facility.”  No word if crayons and coloring books are included.

Likewise, the report calls for “the creation of safe spaces in every NARA facility.”  No word if crayons and coloring books are included.

In addition, the report recommends that the Rotunda stage “dance or performance art in the space that invites dialogue about the ways that the United States has mythologized the founding era.”  It also called for “trigger warnings to forewarn audiences of content that may cause intense physiological and psychological symptoms.”

The Fed informed their staff to refrain from using the “offensive term Founding Fathers.”

An addendum to the trigger warning should be: If you are offended by anything in this building, you are free to leave the country, pronto.

The folks over at the Federal Reserve have already one-upped NARA when the Fed informed their staff to refrain from using the “offensive term Founding Fathers.”

Cassie Smedile, executive director of America Rising, pulled no punches calling the report “the radical Left’s latest attempt to sow division and rewrite our history.  With Democrats controlling every lever of our government, these efforts have only become more flagrant and pervasive. No institution, agency or classroom is off limits.”

This professed report was yet another grievous waste of taxpayer dollars that is nothing more than termites eating away at the floor joists of the nation’s foundation.

No one has a right to expect to experience life without being offended.

What is so misunderstood and, in many instances, ignored is how our Constitution set into motion a country where the common man had as much say as the elite. We are the benefactors of such visionary men. Rather, Leftists seek to destroy this time-honored body of work, while believing the Founders to be dispassionately dead, white, male aristocrats.

Rewriting antiquity by vilifying the great struggles and inherent risks our Founding Fathers took by demeaning their heroism and sacrifice underscores how unenlightened many Americans are.

The American Founders fought for humanity’s first bid at genuine freedom and self-rule while going up against the world’s strongest army and navy with a collection of farmers, shopkeepers and haberdashers. They had no semblance of a navy and did not even have the nation’s full support.

Provided they lost, they would have all hanged.

This is a woke solution, looking for a problem.

Why is it so difficult to understand the individual liberties and opportunities that are the underpinning of our nation’s founding were bestowed upon all of us?  Why can’t we grasp the unique dominions and prospects liberty delivers to each American and how tenuous these freedoms truly are?

No one has a right to expect to experience life without being offended. This is a woke solution, looking for a problem.  In trying not to offend, people fail to inspire and offer nothing in return.

Being offended everywhere you look is vanity disguised as virtue.  Such tactics are not coincidental as the woke crowd is betting that most will concede.  Leftists exploit our freedoms to divide and conquer the American dream without firing a shot.

Instead of Orwell’s “1984” being a fictitious tale, it now serves as the Left’s playbook.

Historical documents are written with the accepted language of the time.  They should be read and learned from.  The freedom and liberty bestowed upon us by the Founders demands personal responsibility, something Leftists refuse to acknowledge.

Instead of Orwell’s “1984” being a fictitious tale, it now serves as the Left’s playbook: “Every record has been destroyed or falsified, every book rewritten, every picture has been repainted, every statue and street building has been renamed, every date has been altered.  History has stopped.  Nothing exists except an endless present in which the Party is always right.”

What remains is whether Americans truly comprehend the threat and possess the willingness to stand up for something more than generating likes on their Disqus postings.

[Comment Guidelines - Click to view]
The Remnant values the comments and input of our visitors. It’s no secret, however, that trolls exist, and trolls can do a lot of damage to a brand. Therefore, our comments are heavily monitored 24/7 by Remnant moderators around the country.  They have been instructed to remove demeaning, hostile, needlessly combative, racist, Christophobic comments, and streams not related to the storyline. Multiple comments from one person under a story are also discouraged. Capitalized sentences or comments will be removed (Internet shouting).
The Remnant comments sections are not designed for frequent personal blogging, on-going debates or theological or other disputes between commenters. Please understand that we pay our writers to defend The Remnant’s editorial positions. We thus acknowledge no moral obligation whatsoever to allow anyone and everyone to try to undermine our editorial policy and create a general nuisance on our website.  Therefore, Remnant moderators reserve the right to edit or remove comments, and comments do not necessarily represent the views of The Remnant.
Last modified on Wednesday, July 28, 2021