Viganò to Priests Wanting to Offer TLM: "Public disobedience could be a way" 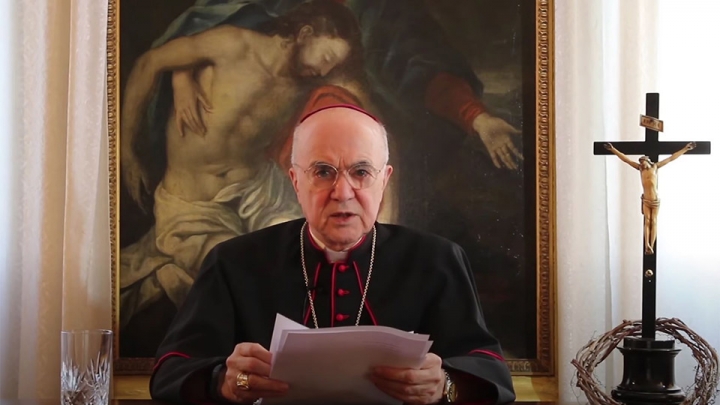 Regarding your request for clarification, I am sending you some considerations that I hope will make my thoughts more explicit. This is the reference sentence: “It will be our duty, whether as Ministers of God or as simple faithful, to show firmness and serene resistance to such abuse, walking along the way of our own little Calvary with a supernatural spirit, while the new high priests and scribes of the people mock us and label us as fanatics. It will be our humility, the silent offering of injustices toward us, and the example of a life consistent with the Creed that we profess that will merit the triumph of the Catholic Mass and the conversion of many souls”.

In continuing to celebrate the Mass of Pope Saint Pius V no priest performs any act of disobedience, but on the contrary he exercises his right sanctioned by God, which not even the Pope can revoke.

You ask me: “What shall priests and faithful do when the bishop clamps down on them?  Shall they go into clandestinity, or shall they cut publicly off, in public disobedience?”

Allow me to say first of all that in continuing to celebrate the Mass of Pope Saint Pius V no priest performs any act of disobedience, but on the contrary he exercises his right sanctioned by God, which not even the Pope can revoke. Whoever has the power to offer the Holy Sacrifice has the right to celebrate it in the ancient rite, as it was solemnly proclaimed by Saint Pius V in the Apostolic Constitution Quo Primum, promulgating the Tridentine Liturgy. This has been reiterated by the Motu Proprio Summorum Pontificum as an indisputable fact. Anyone who contravenes these provisions should know that he will incur the wrath of Almighty God and of the Blessed Apostles Peter and Paul (Quo Primum).

The response to any limitation or prohibition of the celebration of the traditional Mass must obviously take into account both the objective elements and the different situations: if a priest has as an Ordinary a sworn enemy of the ancient rite who has no qualms about suspending him a divinis if he were to celebrate the Tridentine Mass, public disobedience could be a way to make the abuse of the Ordinary clear, especially if the news is spread by the media: the Prelates are very afraid of media coverage about their actions, and sometimes they prefer to refrain from canonical measures just to avoid ending up in the newspapers. The priest must therefore consider whether his action will be more effective with a fair and direct confrontation, or by acting with discretion and in hiding. In my opinion, the first option is the most linear and transparent, and the one that responds most to the behavior of the Saints, to which we must comply.

Anyone who contravenes these provisions should know that he will incur the wrath of Almighty God and of the Blessed Apostles Peter and Paul (Quo Primum).

Obviously there may be the case of a comprehensive Ordinary, who leaves his priest free to celebrate the Tridentine rite; speaking with an open heart to one’s Bishop is certainly important, if one knows that he can find in him a father and not an official. Unfortunately, we know well that most of the time it is a question of tolerance, and almost never of encouragement on the path of Tradition. In some cases, however, inviting one’s Ordinary to celebrate the Mass of St. Pius V himself can be a way to make him understand, by touching the deepest chords of his heart and his priestly soul, which are the treasures reserved for the Ministers of God who have the opportunity to offer the Holy Sacrifice in the apostolic rite. When this “miracle” happens, the Bishop becomes an ally of his priest, because in addition to the intellectual and rational aspect that makes the traditional Mass preferable, he experiences firsthand its spiritual and supernatural dimension, and how it affects the life of Grace of those who celebrate it.

I hope that my words will clarify the points that I had not developed in my previous speech.

[Comment Guidelines - Click to view]
The Remnant values the comments and input of our visitors. It’s no secret, however, that trolls exist, and trolls can do a lot of damage to a brand. Therefore, our comments are heavily monitored 24/7 by Remnant moderators around the country.  They have been instructed to remove demeaning, hostile, needlessly combative, racist, Christophobic comments, and streams not related to the storyline. Multiple comments from one person under a story are also discouraged. Capitalized sentences or comments will be removed (Internet shouting).
The Remnant comments sections are not designed for frequent personal blogging, on-going debates or theological or other disputes between commenters. Please understand that we pay our writers to defend The Remnant’s editorial positions. We thus acknowledge no moral obligation whatsoever to allow anyone and everyone to try to undermine our editorial policy and create a general nuisance on our website.  Therefore, Remnant moderators reserve the right to edit or remove comments, and comments do not necessarily represent the views of The Remnant.
back to top
Last modified on Saturday, August 7, 2021
Tweet

More in this category: « The Cowardice and Hubris of Pope Francis Popes, "Seeming" Popes, and Anti-Popes »