FSSP Reacts Immediately and Decisively to Arrest of Fr. Jackson 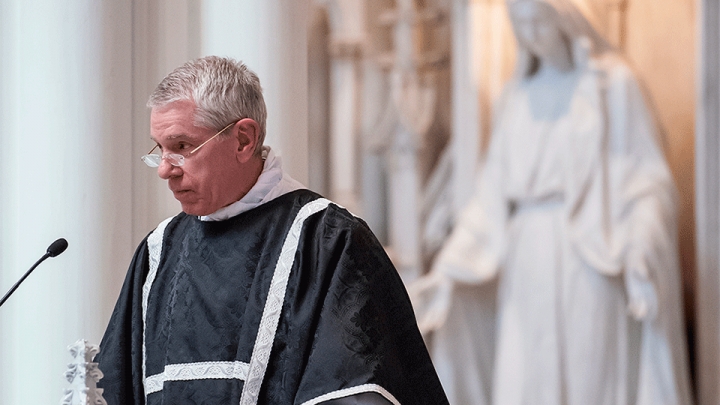 Fr. James Jackson delivers a homily during the funeral Mass for Boulder police officer Eric Talley at the Cathedral Basilica of the Immaculate Conception on March 29, 2021, in Denver, Colorado. (Photo by Daniel Petty/Archdiocese of Denver)

The Rhode Island Police announced Sunday, October 31, that they have arrested Fr. James Jackson, pastor of the FSSP's St. Mary’s Church in Providence, Rhode Island, for crimes related to possession and transfer of child pornography.

If convicted, he could face 21 years in prison.

The FSSP was extremely quick to issue a statement on the matter, which appears below in its entirety:

We, the FSSP, are shocked and saddened by news of Father Jackson’s arrest and the serious allegations against him.

Before starting his current assignment at the beginning of August, Father underwent a criminal background check and had a sterling record of priestly service. We had no reason to believe Father was engaging in any inappropriate behavior, let alone criminal conduct. Like all those accused of crimes, Father has a natural human right under both civil and canon law to the presumption of innocence and we will fully cooperate with the law enforcement authorities as they investigate this matter.

We are praying for all involved. Our hearts go out to all those who have been hurt by sexual misconduct of any kind.

I first met Fr. James Jackson 25 years ago. This news hits me like a punch to the chest, of course, even though it's important for all of us to presume innocence until guilt is proven. It is also very important  for the FSSP to do the right thing right away, which is precisely what they've done in this case.

We ask our readers to pray for Father Jackson, whether he's found innocent or guilty. It is abundantly obvious that the forces of hell are keenly intent on corrupting good and holy priests at this pivotal moment  in history. We are witnessing the Devil's final battle, and it should surprise no one when he targets our priests first.

We must pray for them all and for ourselves and for our children who are paying the terrible price of apostasy in the Church.

[Comment Guidelines - Click to view]
The Remnant values the comments and input of our visitors. It’s no secret, however, that trolls exist, and trolls can do a lot of damage to a brand. Therefore, our comments are heavily monitored 24/7 by Remnant moderators around the country.  They have been instructed to remove demeaning, hostile, needlessly combative, racist, Christophobic comments, and streams not related to the storyline. Multiple comments from one person under a story are also discouraged. Capitalized sentences or comments will be removed (Internet shouting).
The Remnant comments sections are not designed for frequent personal blogging, on-going debates or theological or other disputes between commenters. Please understand that we pay our writers to defend The Remnant’s editorial positions. We thus acknowledge no moral obligation whatsoever to allow anyone and everyone to try to undermine our editorial policy and create a general nuisance on our website.  Therefore, Remnant moderators reserve the right to edit or remove comments, and comments do not necessarily represent the views of The Remnant.
back to top
Last modified on Monday, November 1, 2021
Tweet

More in this category: « Worldwide Walkouts! Catholics Fight Back Against Victoria’s “Enabling Act” »