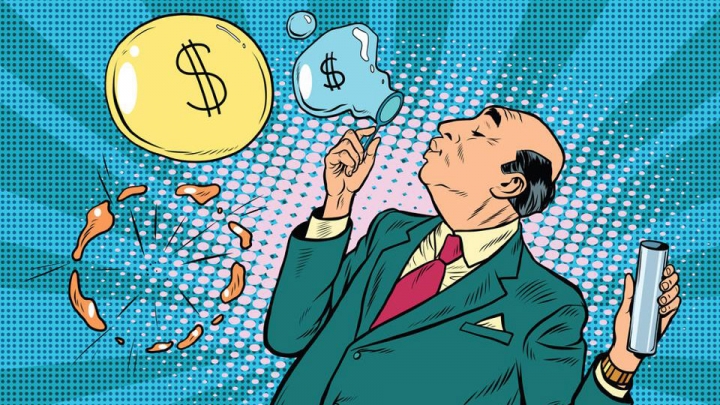 Many playing the stock and bond markets are more speculators than branded investors. For more than a year, they have been pouring money in, but this too will come to an end despite stock prices having doubled the past three years.

This was underscored when the Nasdaq and the S&P 500 posted their worst weekly losses since the beginning of the pandemic with higher interest rates lurking.

When your mail carrier, hairdresser and favorite bartender are all talking up Tesla and trading on margin, the market’s apex looms. When a broker friend was saying how margin trades are at an all-time high, we both agreed the red flag had been hoisted to full mast.

The Federal Reserve says it will raise interest rates three times in 2022, which will cool the economy and with it, the stock market.

Thanks to unprecedented stimulus spending, it unleashed the highest levels of inflation in nearly half a century.

Recent optimism over the market was hard to dismiss as the S&P 500 returned 16.4% per year over the last decade and reaped 28.7% counting reinvested dividends in 2021.

What many are soon to learn is that for over half a century, the S&P 500 has risen annually by an average of 7.2% meaning every decade you would double your money. This was nothing like recent times, but certainly normal by mean-reversion standards.

Most have never experienced an authentic bear market that is prowling just around the corner.  Thanks to unprecedented stimulus spending, it unleashed the highest levels of inflation in nearly half a century. The longstanding inflation yardstick is five percent. The last time it was at five percent was in the 1970s. November’s inflation rate hit 6.8% capping seven months with inflation above 5%.

Markets have never been infatuated with inflation.

As rates rise, companies will go bankrupt as they try to refinance their debt as credit will dry up. It will set off a wave of bankruptcies.

Thanks to more speculation than the roaring 1920s, that has merged with the overvaluation of the 1990s and compounded by the geopolitical Cold War of the 1970s, this should be a very interesting year.

With interest rates near zero and The Fed making history by purchasing corporate bonds for the first time ever, it has resulted in some companies going deeper into debt. With weak sales, coupled with rising interest and inflation rates, their day of reckoning looms.

In the quest by The Fed to raise interest rates in order to slow inflation combined with junk bonds returning negative rates, many companies (which my broker friend likes to call "zombies") will not survive.  As rates rise, companies will go bankrupt as they try to refinance their debt as credit will dry up. It will set off a wave of bankruptcies.

Treasury Secretary Janet Yellen claims inflation is temporary. Then again, what isn’t temporary?  Sadly, we continue to steal from Peter to pay Paul with Mary’s future. The assurances of the Biden administrations that inflation somehow “transitory” is false. History tells us great societies typically fall because of too much debt.

High inflation has dropped its anchor and will certainly exceed The Fed’s 2% target while corporate debt has nearly doubled. Can you spell bubble?

The bubble would have already burst if it were not for the ongoing stimulus that over the past two years saw the money supply increase by $6 trillion. That 36% proliferation rate of green backs means every dollar you hold in your account is worth less than it was yesterday. To put things further in perspective, a dollar in 2022 is worth just 15% of what it was in 1972.  And $100 in 1950 is equivalent to $1,127.

The old adage that timing the stock market is futile – not only lives, but is creed.  Many believe they can and try to sell others that they are able, but no one can successfully time the market.  However, paying attention to the warning signs can shed light where little exists.

In order to do battle with inflation in the nation you must be a scholar with a dollar and have those market stop losses anchored in place.

There is no other way.

[Comment Guidelines - Click to view]
The Remnant values the comments and input of our visitors. It’s no secret, however, that trolls exist, and trolls can do a lot of damage to a brand. Therefore, our comments are heavily monitored 24/7 by Remnant moderators around the country.  They have been instructed to remove demeaning, hostile, needlessly combative, racist, Christophobic comments, and streams not related to the storyline. Multiple comments from one person under a story are also discouraged. Capitalized sentences or comments will be removed (Internet shouting).
The Remnant comments sections are not designed for frequent personal blogging, on-going debates or theological or other disputes between commenters. Please understand that we pay our writers to defend The Remnant’s editorial positions. We thus acknowledge no moral obligation whatsoever to allow anyone and everyone to try to undermine our editorial policy and create a general nuisance on our website.  Therefore, Remnant moderators reserve the right to edit or remove comments, and comments do not necessarily represent the views of The Remnant.
back to top
Last modified on Wednesday, January 26, 2022
Tweet

More in this category: « Perth Archdiocese and the COVID Cult "Life as We Knew It": Denmark Follows Brexit, Lifts All COVID Mandates »