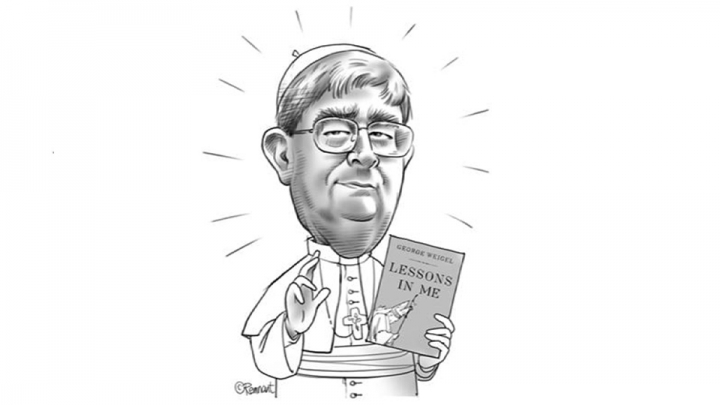 Gorgias Wiggle is a curious little man. Like Paris Hilton, he is famous for being famous. And his fame is exponential, a force of nature. Wiggle holds many titles and Beltway offices, and universities throw honorary titles at him the way revelers on Mardi Gras floats throw doubloons. Accolades stick to Wiggle like refrigerator magnets. He possesses uncommon fortune in getting himself appointed to councils and roundtables and posts. It’s a kind of pseudo-intellectual simony, if you will. Wiggle’s name is always available for branding—if the price is right. Life has been very kind to Gorgias. He has made himself all things to all people, with the usual results in a fallen world.

But the sophistry required to climb the ladders propped up on either side of the Acela tracks is not Gorgias Wiggle’s main talent. The speechifying and summer seminar appearance-making pay the bills, to be sure. And thank God for that. But the general punditry is all just a sidebar. Wiggle’s sophistry is much more focused, and he has been nothing if not consistent in practicing it. Wiggle’s job title is “conservative Catholic.” That is where he really makes his mark. Wiggle is the face of the “conservative Catholic” genre, the ambassador of the brand.

The Newchurch spirit moves whither it lists.

I do not mean by this that Wiggle is wedded to one sovereign above others. The Newchurch spirit moves whither it lists. Wiggle has no particular political loyalty—write him a check and he will love you forever. But there is one thing that he will not tolerate, and that is Catholicism, full stop. The communion rail is the guardrail of “conservative Catholicism,” the bounds beyond which Newchurch will not go. Wiggle’s job, as “conservative Catholic,” is to sell the Second Vatican Council, the ruination of the Church, as a great blessing for modern man. For this sophistry, this grand transposition of truth for lies, Wiggle has wagged the Vatican’s dog and made himself into a household name. Politics first, revelation… well, let us not speak of divisive topics.

No sophist worth his drachmas would come right out and say, of course, that he was doing whatever it is that he is doing. If Wiggle were to stand in the public square and declare himself the enemy of Christ, why, that would upend his entire raison de lucre. The bourgeoisie crowd attending the bourgeoisie farce of Newchurch would blanche, and there would be no more invitations to Gorgias Wiggle to give dinner talks in exotic locales. There would be no more appointments to prestigious councils were sophistry to give away its own game. There would be no more writing for Things First, with its offices in Manhattan and its wine-and-cheese soirees. (Please make a donation!) Wiggle knows what goes above the fold. One does not announce that one is destroying Christendom. No! One simply gives one’s destruction a nice-sounding name.

In this case, the euphemism for theological hooliganism is “ecumenism.” Doesn’t that ring agreeably? It’s the vocabulary equivalent of holding hands. Who could be against holding hands? In this way, under the stage lights of “ecumenism,” Wiggle wriggles the ancient Faith into a more modern idiom. The Thomas Cranmer for our time, Wiggle finds a way for the One True Religion to be gently reupholstered for the greater comfort of those sitting in seats of power. This, you may be surprised to learn, is always wildly popular with politicos. One need not bother with the Social Kingship of Christ. Hold hands, or else! The Things First line is Evangelicals and Catholics Working Together. Imagine all the possible pieces of legislation. It’s easy if you try. Imagine all the people, living life in peace.

There are but three dots ever waiting to be joined: Washington’s wars, “conservative Catholicism,” and Wiggle’s name on mastheads.

But this is not to say that ecumenism is the endgame of the Things First legionnaires. As a veteran of those marches, Gorgias Wiggle is no Pollyanna. He knows that peace comes, not through Christ, but through war. Just war. No, not just war. Just, war. And it matters not the pretense. Let us say that the CIA, notorious for lying and murder, invented a story about “weapons of mass destruction” and goaded Americans into fighting a phony war in pursuit of that phantom. Would Wiggle waver? Is the pope Catholic? For peace, you must have ecumenism. And for that, you must have war. And Wiggle is ready to send your sons and daughters to go fight those wars. For Wiggle knows the lay of the land, and how to read the tilt of secretaries’ and under-secretaries’ heads when they indicate that Wiggle has succeeded, again, in understanding which way the sovereign will waddle. Wiggle waddles that way, too. Always to war, gentlemen. There are no impoverished people working for the Pentagon.

Wiggle criticizes others for connecting dots, for seeing complexity in the world. Things are quite simple for our Gorgias, by contrast. There are but three dots ever waiting to be joined: Washington’s wars, “conservative Catholicism,” and Wiggle’s name on mastheads. These three dots being brought into concert, the way forward is clear. Let us now praise famous men. Let there be a New American Century! Let there be just war, and just war forever, until Warsaw has as high a murder rate as D.C., and as many Planned Parenthoods. The conspiracy theorists of the world connect dots. The frazzled bishops, who would not lie to serve Rome and now will not lie to serve Sodom, are pitiful in their madness. Observe how smooth and flat lie the cities on the plain! One may navigate them at will. Connecting dots is an enterprise for the ragged of mind.

Now, Gorgias Wiggle would waggle, this is not fair. I am against abortion, he would say. I am in favor of law and order. I am no gigolo of the state. I am no kept man. I have my pride. I don’t serve Mammon. I serve Newchurch!

I have very good news for Gorgias, to that point. Ecumenism is a big tent. Everyone is welcome! A seat can be found for all.

Fight on, armies of goodness! Fight now in Ukraine, as you fought to bring gay marriage to Kabul.

And here we come to the true genius of Gorgias Wiggle’s sophistry. He is a “conservative Catholic,” he proclaims. But forsooth, the words are wrinkled. Something is somehow off. Wiggle at Wokemass in the renovated Dairy Queen looks up from his Glory & Praise hymnal—no, wait, I am mistaken, he is singing “The Battle Hymn of the Republic”—and assumes a glaring mien upon hearing Latin chant coming from the old, leaky church next door. Wiggle narrows his eyes when he is reminded that “Tridentine” does not always denote discourse about submarines. He soaks his collars with sweaty lather over the intransigence of the SSPX. Some Old Believers are being broken on the wheel in the State Department parking lot—did I just see Gorgias Wiggle suppress a smile?

This is where the machinery turns. I can think of snake-handling outfits in the backwaters of Pentecostal country that hate the Catholic Church with milder zeal than “conservative Catholics,” which is to say Newchurchers, which is to say closeted Protestants. Which is to say, Gorgias Wiggle—the Catholic who is Lutheran, the Christian who, propped up by an NSA agent under one elbow and Joel Osteen under the other, stretches out his arms across the droneswarm and battlespace, that the righteous may prevail. Fight on, armies of goodness! Fight now in Ukraine, as you fought to bring gay marriage to Kabul. May Gorgias Wiggle keep his arms held aloft for all eternity, lest the world lose the protection of Austin, Blinken, and ice-cream-loving Nod.

There is yet one finer touch to Wiggle’s sophistry. That is the hypocrisy of it all. For example, Wiggle will have none of his own medicine being doled out by the Eastern Orthodox. To “bless a war of aggression” is “blasphemous,” Gorgias intones. Give this man the John XXIII Medal for Expediency in Worldly Affairs! Sophists always claim the mantle of ecumenism, of the higher good. But in the end they are left with their lonely ratiocinations rooted in the need to stay in the sophistry game. Viva Cristo Rey! Yes, sure. But there is much more name recognition in Potomac Jihad. In dhimmitude doth a man prosper. In flattering kings doth a conservative Catholic carry out the new evangelization. In the springtime of the faith, some find that from mustard seeds grow money trees. Which makes the sophistry, and the hypocrisy, worth it all. I guess.

When Newchurch raises Gorgias Wiggle to the altars someday, perhaps the same day that Pope Steinem consecrates Beijing, I pray that green felt banners worldwide will flutter with the spirit of Vatican II.

Gorgias Wiggle is a curious little man. But maybe not so little after all. And maybe not so curious, either. He sits in Newchurch’s front pews. He has his reward, and for that he should have his honor, too. Wiggle is still “conserving” “Catholicism” after a lifetime shuttling between New York City and Washington, D.C. A conservative Catholic for all seasons! When Newchurch raises Gorgias Wiggle to the altars someday, perhaps the same day that Pope Steinem consecrates Beijing, I pray that green felt banners worldwide will flutter with the spirit of Vatican II—the spirit to which, and in which, Gorgias Wiggle has given his entire life in service.

Michael Matt on the Ukraine Crisis
PUTIN'S WAR: Biden, Soros, and the Ghost of John McCain

[Comment Guidelines - Click to view]
The Remnant values the comments and input of our visitors. It’s no secret, however, that trolls exist, and trolls can do a lot of damage to a brand. Therefore, our comments are heavily monitored 24/7 by Remnant moderators around the country.  They have been instructed to remove demeaning, hostile, needlessly combative, racist, Christophobic comments, and streams not related to the storyline. Multiple comments from one person under a story are also discouraged. Capitalized sentences or comments will be removed (Internet shouting).
The Remnant comments sections are not designed for frequent personal blogging, on-going debates or theological or other disputes between commenters. Please understand that we pay our writers to defend The Remnant’s editorial positions. We thus acknowledge no moral obligation whatsoever to allow anyone and everyone to try to undermine our editorial policy and create a general nuisance on our website.  Therefore, Remnant moderators reserve the right to edit or remove comments, and comments do not necessarily represent the views of The Remnant.
back to top
Last modified on Thursday, March 24, 2022
Tweet