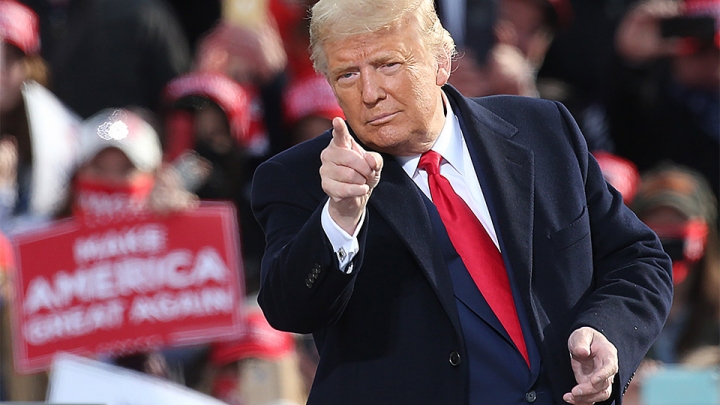 “Can you imagine a child and then they grow up and they say ‘why the hell did you do that to me mom or dad or government?” Trump said at Friday’s rally. Getty Images

Biden released a video on Thursday pledging his support for the transgender community, in which he said “affirming your child’s identity is one of the most powerful things you can do to keep them safe and healthy. Any transgender American who’s struggling, please know you’re not alone.”

Biden also indicated he would fight state laws that limit transgender collegiate athletes from competing. The topic has gained much attention since the emergence of transgender University of Pennsylvania swimmer Lia Thomas, who had a dominant run in competition in women swim teams.

The New York Post covered Trump's Friday rally in Michigan, and reports: Former president Donald Trump slammed the Biden administration’s endorsement of surgery and medical therapy for transgender minors at a rally in Michigan on Saturday.

“Can you imagine a child and then they grow up and they say ‘why the hell did you do that to me mom or dad or government?’”

“Who the hell would have even believed that we’d be talking about this stuff?” Trump asked the crowd.

Other practices promoted include puberty blockers, which can pause pubertal development, and hormone therapy using estrogen or testosterone.

“With their extremist sex and gender ideology the Democratic party is waging war on reality, war on science, war on children, war on women,” Trump said.

Watch the Latest from RTV - GloBA’ALism: Is Pope Francis Dancing with the Devil?

[Comment Guidelines - Click to view]
The Remnant values the comments and input of our visitors. It’s no secret, however, that trolls exist, and trolls can do a lot of damage to a brand. Therefore, our comments are heavily monitored 24/7 by Remnant moderators around the country.  They have been instructed to remove demeaning, hostile, needlessly combative, racist, Christophobic comments, and streams not related to the storyline. Multiple comments from one person under a story are also discouraged. Capitalized sentences or comments will be removed (Internet shouting).
The Remnant comments sections are not designed for frequent personal blogging, on-going debates or theological or other disputes between commenters. Please understand that we pay our writers to defend The Remnant’s editorial positions. We thus acknowledge no moral obligation whatsoever to allow anyone and everyone to try to undermine our editorial policy and create a general nuisance on our website.  Therefore, Remnant moderators reserve the right to edit or remove comments, and comments do not necessarily represent the views of The Remnant.
back to top
Last modified on Monday, April 4, 2022
Tweet
More in this category: « FIFTEEN “Fully Vaccinated” Tennis Players Unable to Finish Miami Open TRAGIC IRONY: Pope Visits Malta, Hides Crosses to Appease Muslims »