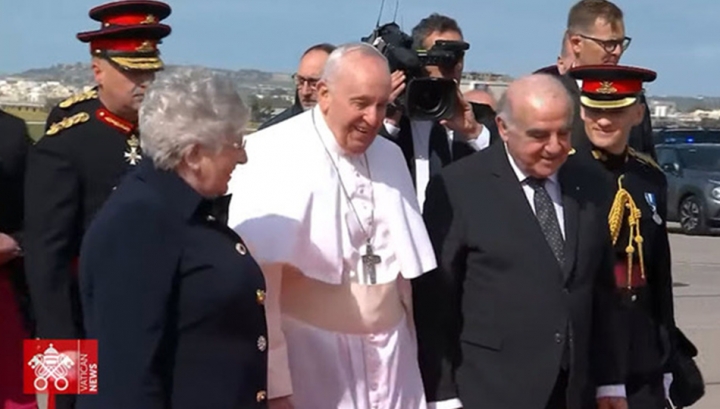 American Thinker reports: Pope Francis, despite being the head of worldwide Catholicism, always seems to be apologizing for the faith.  In Malta, that apology extended to hiding the cross from illegal Muslim aliens.  This act of Christian cowardice was more poignant than usual, given that Malta, in the mid-16th century, was the site of one of the Catholic world's bravest and most successful stands against Islam's push to take over Europe.

One of the most famous battles between Catholic Europe and the Muslim Ottomans occurred at the Great Siege of Malta.  The Knights Hospitaller, whom the Ottomans had driven from Rhodes, had their headquarters there, and when the Ottomans attacked, they refused to yield.  Instead, they and the citizens of Malta withstood a devastating siege that lasted nearly four months.

When it comes to Europe's survival as a Christian community, the Knights Hospitallers' defense of Malta was one of the most important events in European history.  That's why it was so disturbing to read that Pope Francis, when he appeared in Malta, hid the crosses so he wouldn't offend illegal Muslim migrants on that tiny island:

Organizers canceled the crucifix from the papal podium because Pope Francis did not want to offend illegal Muslim migrants during the climax of his Malta trip.

Instead, recycled plastic bottles with red blobs were used to design the backdrop for the pope's address to migrants at the John XXIII Peace Lab in Ħal-Far on Saturday, a voluntary organization run by leftist Franciscan friar Fr. Dionysius Mintoff.

[Artistic director Carlos] Schembri, who was commissioned to design the key backdrops for the papal visit to Malta, insisted he was being faithful to Francis' primary reason for visiting the island — to defend migrants and the ecology.

"The podium will not be adorned with a crucifix, given that the majority of migrants are Muslim," the Malta archdiocese noted,  in an article published on its website, adding that "the pontiff's visit is expected to draw attention to the brutal situation of Malta's migrant community."

You can read more at the link about the way Christianity and traditional values barely factored into the Pope's presentation.  Although he did make the point that the current Western worldview "goes against the right to life from the moment it is conceived," he managed to avoid entirely words such as "Jesus," "sin," and "repentance," and he seemed more concerned with church politics and the rights of illegal aliens.

It is highly ironic that Malta, a place at which Paul preached and those Knights Hospitallers battled to the death in defense of their faith, should host a visit from the pope who seems embarrassed by that same faith and ready to give way to the ideological descendants of the island's one-time enemies.

[Comment Guidelines - Click to view]
The Remnant values the comments and input of our visitors. It’s no secret, however, that trolls exist, and trolls can do a lot of damage to a brand. Therefore, our comments are heavily monitored 24/7 by Remnant moderators around the country.  They have been instructed to remove demeaning, hostile, needlessly combative, racist, Christophobic comments, and streams not related to the storyline. Multiple comments from one person under a story are also discouraged. Capitalized sentences or comments will be removed (Internet shouting).
The Remnant comments sections are not designed for frequent personal blogging, on-going debates or theological or other disputes between commenters. Please understand that we pay our writers to defend The Remnant’s editorial positions. We thus acknowledge no moral obligation whatsoever to allow anyone and everyone to try to undermine our editorial policy and create a general nuisance on our website.  Therefore, Remnant moderators reserve the right to edit or remove comments, and comments do not necessarily represent the views of The Remnant.
back to top
Last modified on Tuesday, April 12, 2022
Tweet
More in this category: « "Waging war on reality": Trump Blasts Biden Admin's Transgender Agenda Following the Science, Moderna Recalls Nearly One Million COVID Vaccines »