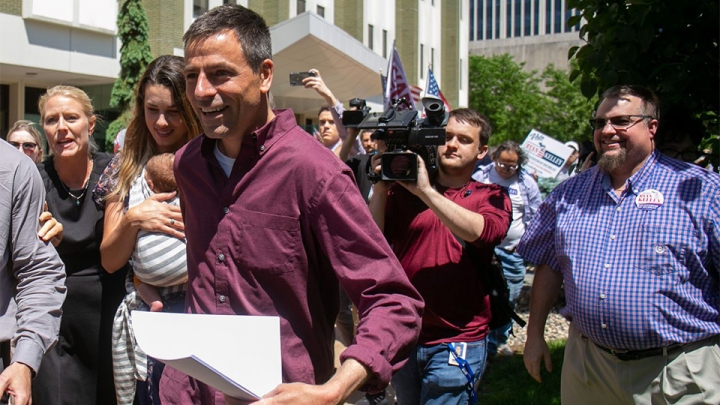 Ryan Kelly, a candidate for governor in Michigan, was just arrested by the FBI concerning the January 6th events in Washington D.C.

Mr. Kelly is a Latin Mass-goer with his large family.

This smells like smear campaign, as he is a threat to certain agendas...

From MLive.com: TEMPLE, MI – Arrested on federal charges, home raided by the FBI, and after the dust settles, Ryan Kelley may now be the most prominent candidate running for the Michigan Republican Party’s gubernatorial nomination.

While Kelley’s arrest may be a long-term problem, political experts see it as a short-term opportunity for Kelley - one of the five remaining Republican candidates for Michigan governor. Recent polling indicates nearly half of Republican voters are still undecided in the primary, but a majority believe President Joe Biden was fraudulently elected and Kelley’s connection to the day-long insurrection is now front-and-center.

Adolph Mongo, a political consultant who worked for Kwame Kilpatrick as the former Detroit mayor was under federal investigation, said Kelley should run with the charges.

“I would say lean into it,” Mongo said. “Don’t go into hiding, go out on the campaign trail. He can raise a lot of money.”

And he is. Friday afternoon at the Tippy Canoe Bar and Grill in rural Clare County, less than 24 hours after appearing in federal court, about two dozen people wandered in to meet the candidate.

“The whole thing with Jan. 6, it’s another Democrat show trying to do power control,” he told the attendees. “They obviously have no real solutions. Look at the price of gas, look at the price of food; we have baby formula shortages.”

Some were still undecided, but for the supporters already behind Kelley, his arrest only solidified their choice.

Terri Kelley of Gladwin (no relation to the candidate) said she had been largely unaffected by what she called a “plandemic.” Railing against Gov. Gretchen Whitmer’s response to the COVID-19 pandemic has been central to Kelley’s campaign.

“There are two things that have really hit home: it’s the gas prices and what happened to Ryan yesterday,” she said. “And that makes me even more passionate about us making sure that we are supporting him.”

Prominent Republicans have been quick to close ranks against Kelley’s prosecution, decrying it as political theater timed to coincide with the first public hearings in Congress on the insurrection. The first was aired live Thursday evening, hours after his arraignment in Grand Rapids.

Michigan Republican Party co-chair Ron Weiser and Meshawn Maddock labeled Kelley’s arrest proof Democrats are “weaponizing our justice system” for political ends. All of Kelley’s opponents in the primary spoke out against the arrest. Another candidate, Garrett Soldano, said the FBI has become an “arm of the Democrat Party.”

Documents filed yesterday in federal court show Kelley was identified at the riot before he announced a run for governor, but there’s no yet a clear answer why the FBI waited to charge Kelley. The U.S. attorney’s office in Washington, DC, has methodically charged more than 800 people in connection with their involvement in the U.S. Capitol riot and continue to arrest and charge attendees.

Kyle Kondik, manager editor of political analysis publication Sabato’s Crystal Ball found it interesting that none of Kelley’s rivals had attempted to use his arrest against him. While Republicans have largely criticized the arrest, none have tried to defend Kelley’s alleged actions at the U.S. Capitol.

“Perceptions about January 6th have hardened to the point where Republicans just don’t want to talk about it,” Kondik said. “Come the general election, I think it’d be a significant problem for Kelley if he was in fact nominated.”

Three weeks ago, Kelley was another face in a primary field 10-deep. Now, when Kelley next makes a court appearance by video June 16, a host of media will be following every development. Republican consultant David Forsmark is no fan of Kelley, calling him “a nut,” but conceded he may soon be the best-known candidate.

“My candidates are going door-to-door and people are asking them who’s running for governor,” Forsmark said. “When they tell them, nobody’s heard of any of them.”

And Kelley seems aware of that, saying in an interview with MLive on Friday afternoon in Harrison, just north of Clare: “If you didn’t know my name a couple of days ago, you know it now.”

Still, in a general election, Forsmark said Kelley’s charges would become a millstone.

“If he’s the nominee, the whole Biden wind at our backs just goes away,” he said.

[Comment Guidelines - Click to view]
The Remnant values the comments and input of our visitors. It’s no secret, however, that trolls exist, and trolls can do a lot of damage to a brand. Therefore, our comments are heavily monitored 24/7 by Remnant moderators around the country.  They have been instructed to remove demeaning, hostile, needlessly combative, racist, Christophobic comments, and streams not related to the storyline. Multiple comments from one person under a story are also discouraged. Capitalized sentences or comments will be removed (Internet shouting).
The Remnant comments sections are not designed for frequent personal blogging, on-going debates or theological or other disputes between commenters. Please understand that we pay our writers to defend The Remnant’s editorial positions. We thus acknowledge no moral obligation whatsoever to allow anyone and everyone to try to undermine our editorial policy and create a general nuisance on our website.  Therefore, Remnant moderators reserve the right to edit or remove comments, and comments do not necessarily represent the views of The Remnant.
back to top
Last modified on Saturday, June 11, 2022
Tweet
More in this category: « Remnant Tours Chaplain Brings TLM Back to High Altar of Chartres Cathedral Francis Confirms the Root of the Problem: Vatican II »