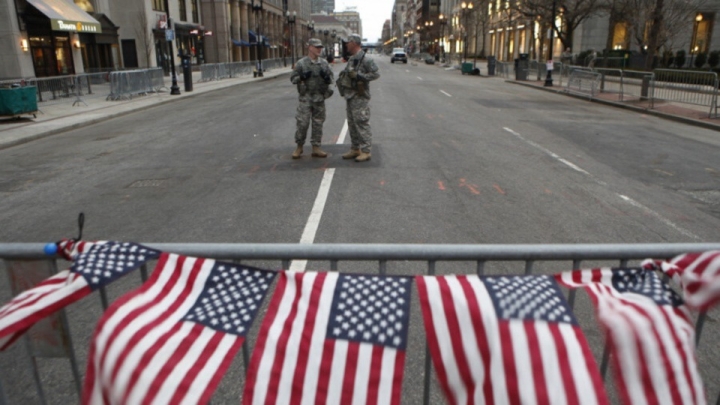 As America celebrates the nation’s birth by taking inventory of the hotdogs, hamburgers, soda and beer, the most treasured and esteemed American stock lies forsaken along freedom’s continuum.

In his seminal work, “Crisis and Leviathan,” economic historian Robert Higgs argued how in the 20th century the federal government grew as a result of three crises: World War I, the Great Depression, and World War II. In the 21st century, you can add 9/11 and COVID-19 to the list. During those crises, the federal government went about raising taxes, instituted more spending programs, and added to their arsenal more regulatory power.

With the heady combination of 9/11 and COVID, the government continues to fester as America devolves into Gotham City.

With the heady combination of 9/11 and COVID, the government continues to fester as America devolves into Gotham City. I was reminded of this during a recent trip to the airport.  I was not flying, just dropping off, and still had to remove my shoes, empty my pockets, and go through a full body scan in order to escort my daughter to her departing gate.

What Benjamin Franklin, our first self-made American, said over two centuries ago certainly resonated: “Those who would give up essential liberty, to purchase a little temporary safety, deserve neither liberty nor safety.”

As we traversed the terminal there was a sketching of the top ten skyscrapers in the world. The U.S. has only one on the list at number six – the Freedom Tower in Lower Manhattan – that was supposed to fill the void left when the World Trade Center met its untimely fate on 9/11. A generation ago, America had all ten.

Besides the overwrought airport security courtesy of The Transportation Security Administration (TSA), I couldn’t help but wonder what other things have been compromised all in the name of security in a time of heightened emotions “where something must be done.”

Proposals for more legislation, regulations, and interventions is akin to treating a poisoned patient with more poison.

Enter the Patriot Act, Homeland Security, TSA and an emboldened National Security Agency and the Foreign Intelligence Surveillance Courts that illegally spies on more than three million Americans, and this is according to that leftist fortress, The New York Times. Not to be dismissed was America taking on the costly role of being the unwanted landlords of Iraq and Afghanistan.

Government’s resulting muscle has grown too penetrating and too concentrated. Many throughout the federal bureaucracy are overly determined to inject this power into all aspects of American life. Proposals for more legislation, regulations, and interventions is akin to treating a poisoned patient with more poison.

Solving problems caused by too much government with more government is no answer.

Government has devolved into a centralized religion telling houses of worship to close, while giving abortion clinics the green light to remain open during a pandemic. Government bureaucrats sell voting and vaccines as salvation while indoctrinating America’s children through public education.

The country is on a suicidal path culturally and taking our freedom along for the ride.

The government has banned God in the classroom, the locker room, the public square, public buildings, and ignores His teachings when writing its laws. Observing constitutional limits that does not provide for a “right” to abort an unborn child is depicted as violating “women’s rights” when the left cannot or will not define what a “woman” is.

The country is on a suicidal path culturally and taking our freedom along for the ride. The Founding Father that would not be surprised: Franklin.

On September 17, 1787, as the delegates departed the Constitutional Convention in Philadelphia’s Independence Hall, Franklin was asked what kind of government the convention had created.  Franklin famously replied, “A republic, if you can keep it.”

Franklin also remarked how “freedom of speech is a principal pillar of a free government; when this support is taken away, the constitution of a free society is dissolved, and tyranny is erected on its ruins.”

On the day of celebrating America’s independence, the nation is fighting a cold war with itself.

On the day of celebrating America’s independence, the nation is fighting a cold war with itself that has most Americans wishing for a sense of normalcy, but at what price?

[Comment Guidelines - Click to view]
The Remnant values the comments and input of our visitors. It’s no secret, however, that trolls exist, and trolls can do a lot of damage to a brand. Therefore, our comments are heavily monitored 24/7 by Remnant moderators around the country.  They have been instructed to remove demeaning, hostile, needlessly combative, racist, Christophobic comments, and streams not related to the storyline. Multiple comments from one person under a story are also discouraged. Capitalized sentences or comments will be removed (Internet shouting).
The Remnant comments sections are not designed for frequent personal blogging, on-going debates or theological or other disputes between commenters. Please understand that we pay our writers to defend The Remnant’s editorial positions. We thus acknowledge no moral obligation whatsoever to allow anyone and everyone to try to undermine our editorial policy and create a general nuisance on our website.  Therefore, Remnant moderators reserve the right to edit or remove comments, and comments do not necessarily represent the views of The Remnant.
back to top
Last modified on Monday, July 4, 2022
Tweet

More in this category: « MALTA NEWS: Catholics Condemn Document on Communion for Public Adulterers (Sign Petition) SNL and the Real Reason for the Hate Against Donald Trump »