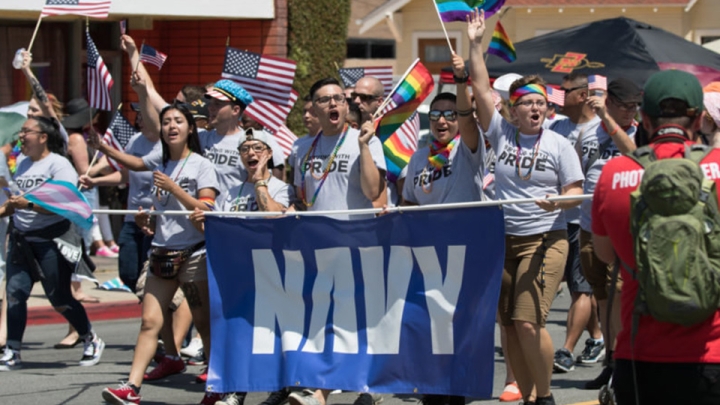 Military recruiting from the enlisted ranks to the service academies are down and so is retention. Such problems are a self-inflicted wound that need not be. Moreover, an annual poll by the Reagan Institute revealed 45% of Americans have a “great deal” of confidence in the armed forces – down 25% in just three years.

Hurricane Ian’s ravage through Florida and the courageous efforts of Coast Guard rescue swimmer Zach Loesch for saving lives prompted President Biden to personally thank him. However, the heroic Loesch is among 2,632 that will soon be booted from the military compliments of Biden’s COVID jab mandate.  Loesch’s religious exemption was denied and so was his appeal. “If I had asked any of the people I saved yesterday if they wanted to come with me even though I am unvaccinated, every single one of them would have said ‘yes,’” Loesch told Breitbart News.

Biden praises Loesch for heroism, then tosses him overboard for not having a shot that the CDC now admits does not prevent the spread or protect one from COVID. Getting praise from Biden is like the devil thanking you for losing your soul. On one hand, we have a heroic young man saving lives and serving his country. On the other hand, we have a disorientated, career politician and nonveteran living off the public dole. Which one would you want discharged?

Troops are being booted over a mandate for a pandemic that has now been declared “over” by their own commander-in-chief.

The COVID jab’s ineffectiveness is being blamed on those who did not take it, whereas the Coast Guard’s rescue proficiency will be significantly impacted not to mention its readiness, and morale by these forced discharges. Troops are being booted over a mandate for a pandemic that has now been declared “over” by their own commander-in-chief. Biden does not deserve Loesch’s loyalty, professionalism, and dedication to duty.

In addition, unvaccinated National Guard and reserve troops are not allowed to participate in federally funded training and field exercises that ultimately affects their ability to serve effectively. They too face possible discharge that will only compound problems with potential disastrous effects.

Traditional immunizations within the armed forces are necessary and such protocol should be enforced, but the COVID shots are not true vaccines being on par with flu shots. The COVID mandate runs counter to what the CDC acknowledges how natural immunity from a prior infection “provides substantially similar protections” to the shot.

The COVID jab is being administered under emergency use as an experimental medical procedure. Under the Geneva Convention, even POWs are protected from medical experimentation. Like Biden said “the pandemic is over” so must the mandate especially considering how it causes an increase in myocarditis among young men.

The onset of wokeness and transgenderism multiplied by abysmal flag officer leadership has America’s enemies acting out in chorus.

COVID precautions have gone the way of the rotary telephone, so why is this still an issue? People are contracting COVID regardless of how many boosters they have received. Biden promised repeatedly before and after taking office that he would never enact a vaccine mandate.  Many in the media conveniently ignore this salient fact.

The military’s troubles run much deeper than the COVID jab mandate. The onset of wokeness and transgenderism multiplied by abysmal flag officer leadership has America’s enemies acting out in chorus. Russia invades Ukraine and threatens nuclear war, China bullies Taiwan, Iran wants nothing more than to join the nuclear club, while North Korea launches ballistic missiles over Japan.

There are at least two congressmen who have acknowledged what is transpiring within our armed forces. Rep. Mike Johnson of Louisiana, who is the vice chairman of the House Republican Caucus, wrote in a series of tweets: “There is simply no other way around it: Until @SecDef [Austin] withdraws, delays, or modifies the vax mandate, or begins rapidly granting more exemptions, our military will have to continue lowering recruitment standards degrading the readiness and professionalism of our Armed Forces.”

Rep, Mike Gallagher of Wisconsin, an Iraqi veteran, said in the Wall Street Journal: “The military’s emphasis on “inclusion” at the expense of “war-fighting excellence” may deprive the military of the recruits it most needs.

Identifying the problem is a big first step but without a second step it serves no resolve.

America’s youth can be idealistic and somewhat naïve, but they are not senseless.

They deserve better and so does America and the free world.

Related from RTV — THE GREAT RESIST: From Cardinal Müller to Giorgia Meloni & from Musk to Putin

[Comment Guidelines - Click to view]
The Remnant values the comments and input of our visitors. It’s no secret, however, that trolls exist, and trolls can do a lot of damage to a brand. Therefore, our comments are heavily monitored 24/7 by Remnant moderators around the country.  They have been instructed to remove demeaning, hostile, needlessly combative, racist, Christophobic comments, and streams not related to the storyline. Multiple comments from one person under a story are also discouraged. Capitalized sentences or comments will be removed (Internet shouting).
The Remnant comments sections are not designed for frequent personal blogging, on-going debates or theological or other disputes between commenters. Please understand that we pay our writers to defend The Remnant’s editorial positions. We thus acknowledge no moral obligation whatsoever to allow anyone and everyone to try to undermine our editorial policy and create a general nuisance on our website.  Therefore, Remnant moderators reserve the right to edit or remove comments, and comments do not necessarily represent the views of The Remnant.
back to top
Last modified on Saturday, October 15, 2022
Tweet

More in this category: « Traditionis Custodes Strikes the Archdiocese of Perth Pope Francis Adds a Year to the Sesame Street Synod »