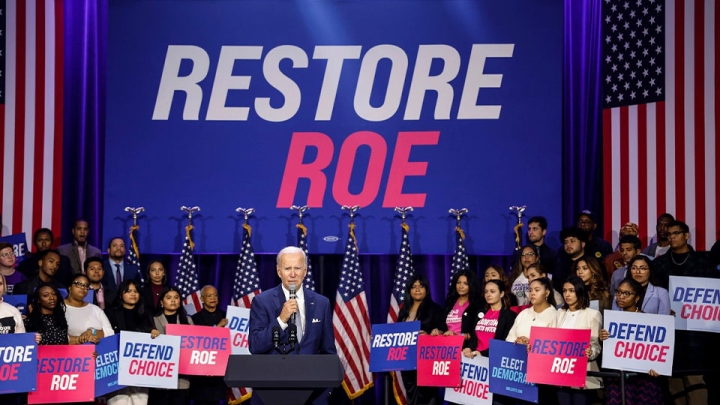 It was a heretical political “Hail Mary” in the first-degree for our ersatz Catholic president in a desperate attempt to motivate the Democrat base in the November midterm election.

“The court got Roe right nearly 50 years ago and I believe the Congress should codify Roe, once and for all,” President Biden informed the Democratic National Committee.  There is nothing like killing babies that rouses Democrats, which Biden believes will turn the red wave into a blue sea of victory.

For Democrats, nothing is more sacrosanct than abortion and are betting on a Roe v. Wade backlash that would induce the left and turn political straw into election gold. Recently, in the House of Representatives, Florida Republican Rep. Brian Mast questioned Democrats to explain to him when life begins. Their silence was telling. This is the same group that believes a man can get pregnant.

Provided Democrats are victorious next week, “the first bill that I will send to the Congress will codify a nationwide right to abortion,” Biden vowed. To stick it to the pro-life movement, Biden promised to sign such legislation on the January date exactly 50 years after Roe v. Wade was first decided.

After the Supreme Court overturned Roe v. Wade in June with the prodigious Dobbs decision that returned the right to regulate abortion back to the states, Biden described the ruling as “outrageous.”

After the Supreme Court overturned Roe v. Wade in June with the prodigious Dobbs decision that returned the right to regulate abortion back to the states, Biden described the ruling as “outrageous,” arguing it was “a mistake, in my view, for the Supreme Court to do what it did.”

In response, Democrats tried and failed to pass an abortion bill, falling well short of the 60 votes needed in the Senate to overcome a filibuster. Moreover, the Biden administration has failed to stem the tide of statewide pro-life laws that have taken effect after the Supreme Court overturned Roe. Thus far, 13 states have outlawed abortion, while others have put into effect various provisions defending the unborn.

Like China and North Korea, priority one for Democrats in 2023 is making abortion federal law up until the moment of birth.

Forget record inflation, gas and food prices, spiking crime, millions of illegal border crossings, a politicized public education system, and a military void of leadership in an era brewing of nuclear war... these have all been relegated to the political periphery. Like China and North Korea, priority one for Democrats in 2023 is making abortion federal law up until the moment of birth.  Yet, it is the Republicans who are endlessly portrayed as extremists.

What is simply dismissed is how Congress had half a century to pass federal abortion legislation, which is the same amount of time Biden has spent there.  Biden has been president for two years with Democrats controlling Congress.  Now, right before the midterm election, federal abortion laws are priority one?

In Los Angeles Vice President Kamala Harris said, “When I’m traveling around the country, one of the feelings that I hear most is fear.” The fear Harris references is not about being killed, raped, and robbed, or the inability to pay bills. The fear is restrictions on abortion. According to The Wall Street Journal, Democrats have run more campaign ads focused on abortion than on any other issue. Rep. Eric Swalwell has an ad showing police handcuffing a woman in front of her family because she had an abortion. The only people who are subjected to such behavior are pro-life activists like Mark Houck of Bucks County, Pennsylvania.

Biden’s pretentious zealotry and extremism on abortion is ugly and disqualifying in every way, both as a Catholic and as president.

That is all the Democrats have to campaign on is the right to murder babies?

This is simply defenseless. Biden’s pretentious zealotry and extremism on abortion is ugly and disqualifying in every way, both as a Catholic and as president.

The elevation of abortion into issue number one is an eleventh-hour act of desperation to divert all attention from the Democrats’ two-year long train wreck of governance.

Sadly, there are plenty of willing buyers who will not give it a second thought.

Biden’s talk of “legislating” abortion at the federal level is inadmissible and unconstitutional.

Any Biden proposal runs counter of the Dobbs decision, regardless. There is no constitutional authority for Congress to pass a nationwide abortion law. The Constitution only gives the federal government enumerated powers, and decreeing abortions is not one of them. Biden’s talk of “legislating” abortion at the federal level is inadmissible and unconstitutional.

Biden believes Democrats are so gullible that they can be motivated by such a lie.

He could be right.

[Comment Guidelines - Click to view]
The Remnant values the comments and input of our visitors. It’s no secret, however, that trolls exist, and trolls can do a lot of damage to a brand. Therefore, our comments are heavily monitored 24/7 by Remnant moderators around the country.  They have been instructed to remove demeaning, hostile, needlessly combative, racist, Christophobic comments, and streams not related to the storyline. Multiple comments from one person under a story are also discouraged. Capitalized sentences or comments will be removed (Internet shouting).
The Remnant comments sections are not designed for frequent personal blogging, on-going debates or theological or other disputes between commenters. Please understand that we pay our writers to defend The Remnant’s editorial positions. We thus acknowledge no moral obligation whatsoever to allow anyone and everyone to try to undermine our editorial policy and create a general nuisance on our website.  Therefore, Remnant moderators reserve the right to edit or remove comments, and comments do not necessarily represent the views of The Remnant.
back to top
Last modified on Monday, November 7, 2022
Tweet