GET SMART! FUS Pays Students to Leave Phones at Home 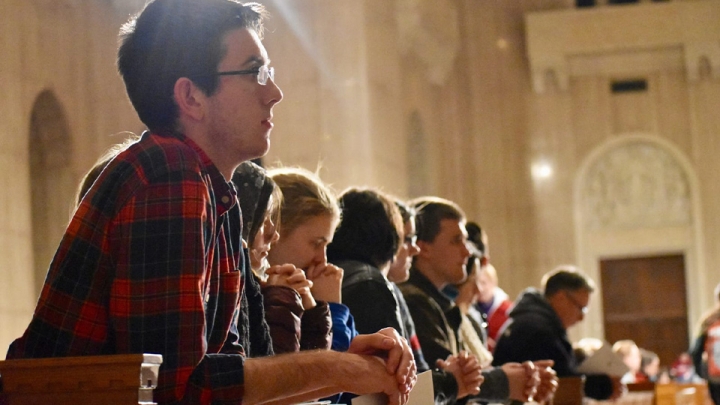 Tuition assistance is first step at forming foundation to help humans engage in reality and step away from the digital universe.

NCRegister | On Sept. 13, Franciscan University of Steubenville launched the pilot of its “Unplugged Scholarship,” a scholarship that awards financial aid to students that give up their smartphones during their college careers.

“Franciscan is leading the way and inviting a generation of young adults to detach from this digital universe,” said Justin Schneir ’99, an alumnus who helped to start this initiative, “a universe that has been holding many back from engaging in the joy of being a child of God.”

Justin, his wife, Hope, also Class of ’99, and a group of alumni started the “Unplugged Scholarship.” They plan for this scholarship to be a part of a larger movement called The Humanality Foundation, an initiative that will help curb digital dependence.

“The Humanality Foundation was created for the sole purpose of helping humans engage with reality by gaining control of their digital universe,” Justin said. “We value a life lived fully, a life connected to meaningful engagement with self, other and God.”

Although smartphones are an immensely efficient tool, often people become the product of the phone, Justin said.

“A lot of us have enjoyed the benefits that come with a smartphone, but we feel that we’re wanting to reclaim who we are and what’s been lost,” Hope said.

When Hope and Justin were in college at Franciscan, Big Tech hadn’t taken stage yet, they said.

Justin said he enjoyed meeting people while walking to class. Neither of them walked with AirPods in on campus and instead learned to be at peace amid silence.

“We want to encourage people to take steps to reclaim what it means to be human,” Hope said. “Mostly, it’s having your relationships be more authentic and real, creating space in our lives for silence, and embracing the world that’s incarnate, the world that God made, rather than multi-living.”

On social media, it’s easy to live different lives on and offscreen, and often, we can miss what is right in front of us. But in college, students have everything they need within reach, Hope said. They have meal plans, dorms and classes close by, but they also have people God has placed in their midst, not on a screen.

In its pilot phase, the “Unplugged Scholarship” has granted 30 students a $5,000 scholarship. Franciscan had 171 students apply for the scholarship, according to Tim Delaney, the executive director of alumni and constituent relations at Franciscan.

“The goal that the donor group has is that every kid who wants to live without a smartphone would be funded,” Delaney said.

Mary Saarinen, a scholarship recipient and Franciscan University senior, said the group of almost 80 students has met twice already this semester, coming together to support one another and share their personal experiences with going smartphone-free.

Read the rest at NCRegister.com.

[Comment Guidelines - Click to view]
The Remnant values the comments and input of our visitors. It’s no secret, however, that trolls exist, and trolls can do a lot of damage to a brand. Therefore, our comments are heavily monitored 24/7 by Remnant moderators around the country.  They have been instructed to remove demeaning, hostile, needlessly combative, racist, Christophobic comments, and streams not related to the storyline. Multiple comments from one person under a story are also discouraged. Capitalized sentences or comments will be removed (Internet shouting).
The Remnant comments sections are not designed for frequent personal blogging, on-going debates or theological or other disputes between commenters. Please understand that we pay our writers to defend The Remnant’s editorial positions. We thus acknowledge no moral obligation whatsoever to allow anyone and everyone to try to undermine our editorial policy and create a general nuisance on our website.  Therefore, Remnant moderators reserve the right to edit or remove comments, and comments do not necessarily represent the views of The Remnant.
back to top
Last modified on Tuesday, November 29, 2022
Tweet
More in this category: « BIG WIN: Appeals Court Cancels San Diego Schools Vax Mandate Watch The Heartwarming Film Grisly Grisell Free »