The End of the Popularity of Pope Francis? 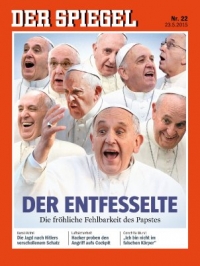 The article you are reading originally appeared in German in issue 22/2015 (May 23, 2015) of DER SPIEGEL.
In the third year of his pontificate, criticism is growing of Pope Francis. Members of the Vatican establishment are turning against him and he even shocks his own staff with his free thinking. Where does this enigmatic pope want to steer the Catholic Church?

This article from Der Spiegel is long but contains plenty of intimations that, even as the mob raised Francis up, it may soon let him fall.  And what will happen then?

Here's a snippet from the article:  "They're an experienced team, the three of them. The driver has barely stopped, and already the security guard has grabbed a child from the crowd on the left and is holding it up for the pope. The pontiff bends over, kisses the child -- and then it's over.

"The whole thing takes mere seconds and repeats itself several times during the pope's Wednesday lap of honor before the general audience on St. Peter's Square starts. If there are any larger groups he can see -- Boy Scouts, for example, or wheelchair-users -- then Christ's representative on Earth briefly taps the Popemobile-driver on the shoulder to get him to stop. When observed from up close, Pope Francis comes across as a stately man. The white cassocks strain at his midsection, his pronounced chin is elongated and his eyes look searchingly into those of the people surrounding him. Compared to his predecessor, the almost otherworldly smiling Benedict XVI, the Argentinian comes across as downright earthly. As though there were no distance at all.

"He hugs and he pats. He kisses small children and cardinals. He does it without warning and enthusiastically. It's almost as if he's using bodily contact to console himself for the burden of his position. He is the highest-ranking person of faith and a role model for the 1.3 billion Catholics around the world.

"When Pope Francis, otherwise known as Jorge Mario Bergoglio, entered St. Peter's Basilica at 10 a.m. on Pentecost Sunday for the Holy Mass, he had been in office for 797 days. Seven-hundred-ninety-seven days in which he has divided the Catholic rank-and-file into admirers and critics. At time during which more and more people have begun to wonder if he can live up to what he seems to have promised: renewal, reform and a more contemporary Catholic Church.

"Francis has had showers for homeless people erected near St. Peter's Square, but has at the same time also spent millions on international consultants. He brought the Vatican Bank's finances into order, but created confusion in the Curia. He has negotiated between Cuba and the United States, but also scared the Israelis by calling Palestinian President Mahmoud Abbas an "angel of peace."

"This pope is much more enigmatic than his predecessor -- and that is becoming a problem. Right up to this day, many people have been trying to determine Francis' true intentions. If you ask cardinals and bishops, or the pope's advisors and colleagues, or veteran Vatican observers about his possible strategy these days -- the Pope's overarching plan -- they seem to agree on one point: The man who sits on the Chair of St. Peter is a notorious troublemaker." READ THIS ENTIRE ARTICLE HERE


REMNANT COMMENT: Question: Is it better for souls and for the life of the Church if Francis were to abdicate, or would the prospect of three popes in Rome lead to a greater crisis than Francis has caused already?

[Comment Guidelines - Click to view]
The Remnant values the comments and input of our visitors. It’s no secret, however, that trolls exist, and trolls can do a lot of damage to a brand. Therefore, our comments are heavily monitored 24/7 by Remnant moderators around the country.  They have been instructed to remove demeaning, hostile, needlessly combative, racist, Christophobic comments, and streams not related to the storyline. Multiple comments from one person under a story are also discouraged. Capitalized sentences or comments will be removed (Internet shouting).
The Remnant comments sections are not designed for frequent personal blogging, on-going debates or theological or other disputes between commenters. Please understand that we pay our writers to defend The Remnant’s editorial positions. We thus acknowledge no moral obligation whatsoever to allow anyone and everyone to try to undermine our editorial policy and create a general nuisance on our website.  Therefore, Remnant moderators reserve the right to edit or remove comments, and comments do not necessarily represent the views of The Remnant.
back to top
Last modified on Tuesday, June 2, 2015
Tweet

More in this category: « Meditaions for Day Three of the Pilgrimage Bishop Fellay Has Sold Out? Please! »