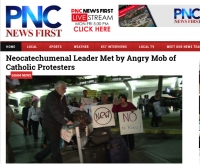 So the Neocats are being booed in Guam? God bless our brothers and sisters in Guam, then.

Back in June of 2008, we ran the following report on the insufferabel Neo-Catechumenal Way. Obviously, not much has changed, except the Neocats are stronger than ever under the funhouse Church that Francis is building. Please, God, raise up a saint among us to cast out the heretics, pagans and infidels who have taken control of your Church.

The Remnant, June 15, 2008: “The Catholic lay Neocatechumenal Way has received the Church's final approval of its statutes; the degree of recognition will be presented to the group's founders Friday,” reports Zenit (June 12, 2008). “Cardinal Stanislaw Rylko, president of the Pontifical Council for the Laity, will give Kiko Argüello and Carmen Hernández the decree expressing the Church's approval of the groups organization and charism”:

According to the founders, the Way is a concrete response to numerous pastoral intuitions of Vatican II, such as, the rediscovery of the Easter Vigil, the laity's participation in evangelization. An example of this last principle is the novelty of sending "families on mission," in response to requests from local bishops to provide, together with a priest, an initial evangelization for those areas where the Church has not been established.

In 1990, Pope John Paul II wrote a letter acknowledging the Neo-Catechumenal Way (NCW) to Bishop Paul Josef Cordes, Vice-President of the Pontifical Council for the Laity, in which John Paul wrote:

I too, as Bishop of Rome, have been able to verify the copious fruits of personal conversion and fruitful missionary impulse in the many meetings I have had in the Roman parishes with the Neocatechumenal Communities and their Pastors, as well as in my apostolic journeys in many nations..... I acknowledge the Neocatechumenal Way as an itinerary of Catholic formation, valid for our society and for our times.

In 2002, the NCW Statutes were given a five-year provisional (“ad experimentum”) approval, pending changes in the manner in which NCW communities celebrated their Eucharists. These Statutes are composed of 35 articles, expressing the nature of “The Way” (as it is called by its members), the “Spiritual Goods” resulting from it, and the manner in which “The Way” operates.

One overriding idea comes across throughout the NCW Schema for Catechists (a training manual for NCW catechists). Namely, from the time of Constantine the Great up to the Second Vatican Council (a span of some 1600 years), the Catholic Church became detached from her spiritual roots, assumed a shallow, superstitious character, and came to rely on ritualism and dogmatism for their own sake. Kiko and Carmen teach their catechists that, instead of catechizing pagans, the post-Constantine Church was, in fact, herself catechized by the superstitious pagans who joined her. This primitivism of Kiko and Carmen views such things as the Traditional Latin Mass, the Sacrament of Penance, doctrines on salvation, etc. as compromised entities, puffed-up with unnecessary ritual, solemnity and dogmatism.

At this point in time, neither the Vatican nor the Holy Father can claim ignorance as to the true nature of the Neo-Catechumenal Way, for their teachings are not as secretive as they once were. The warped view of Church history, doctrine and the Sacraments presented by Kiko and Carmen can in no way be reconciled with sound theology or Catholic teaching. It is no wonder that Kiko and Carmen have such admiration for Martin Luther.

The announcement of the Holy See’s approval of the Statutes of the NCW comes right on the heels of a report that four bishops from Japan traveled to Rome to resolve a "serious problem" with the methods of the Neo-Catechumenal Way and its seminary in a Japanese diocese. An April 30, 2008 report by CathNews included the following quotation from one of these bishops, Archbishop Peter Takeo Okada of Tokyo, President of the Bishops' Conference:

In the small Catholic Church of Japan, the powerful sect-like activity of [Neo-Catechumenal] Way members is divisive and confrontational. It has caused sharp painful division and strife within the Church. We are struggling with all our strength to overcome the problem but feel that if a solution is to be found, the consideration of Your Holiness for the Church in Japan will be of the utmost importance and direly needed.

This is nothing new. In 1996, the Right Reverend Mervyn Alexander, Bishop of Clifton (UK), established a panel of inquiry to explore claims made by parishioners in at least three parishes that their parishes had been harmed by the activities of the Neo-Catechumenal Way. Not only did this panel conclude that the NCW failed to bring “new vitality to animate these parishes,” but it also noted that the presence of the NCW communities “conveys a sign of strong disunity.”

Unfortunately, the main focus of concern regarding the NCW and its official status within the Church has been purely liturgical. A December 1, 2005 letter of Cardinal Francis Arinze, Prefect of the Congregation for Divine Worship and the Discipline of the Sacraments, to Kiko, Carmen and Fr. Mario Pezzi, cites such NCW practices as the giving of “admonitions” before Scripture readings, the kiss of peace, the manner of receiving Communion, etc. But what of doctrine? What of error? What of heretical teachings?

For the same Pope to free the Traditional Latin Mass from the shackles of the “indult” mentality AND approve the Statutes of the Neocatechumenal Way can only be regarded as a complete contradiction. Tradition and Novelty simply can not be treated as equals. Why is the Vatican pretending that serious criticisms of “The Way” – by those in the know – do not exist? No, we are not out of the woods yet, by any stretch of the imagination.

The Remnant is turning 50 next year! In preparation for our anniversary we're preparing to put our entire archive online and available for free to Remnant print subscribers. Interested? Subscribe Today!

[Comment Guidelines - Click to view]
The Remnant values the comments and input of our visitors. It’s no secret, however, that trolls exist, and trolls can do a lot of damage to a brand. Therefore, our comments are heavily monitored 24/7 by Remnant moderators around the country.  They have been instructed to remove demeaning, hostile, needlessly combative, racist, Christophobic comments, and streams not related to the storyline. Multiple comments from one person under a story are also discouraged. Capitalized sentences or comments will be removed (Internet shouting).
The Remnant comments sections are not designed for frequent personal blogging, on-going debates or theological or other disputes between commenters. Please understand that we pay our writers to defend The Remnant’s editorial positions. We thus acknowledge no moral obligation whatsoever to allow anyone and everyone to try to undermine our editorial policy and create a general nuisance on our website.  Therefore, Remnant moderators reserve the right to edit or remove comments, and comments do not necessarily represent the views of The Remnant.
back to top
Last modified on Tuesday, July 12, 2016
Tweet