God of Surprises Stabs Chinese Catholics in the Back 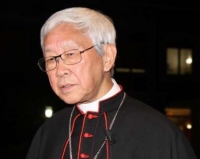 This just in from Breitbart:

In a troubling new open letter to the media, the redoubtable Cardinal Joseph Zen, China’s highest ranking Catholic prelate, has accused the Vatican of “selling out” the Church by caving in to demands of the Communist leaders.

Sparking the cardinal’s declarations Monday were recent reports of the Vatican asking two Chinese bishops faithful to Rome to resign their posts in order to make way for new bishops of the Patriotic Association, the surrogate Catholic Church in China subject to the Communist party.

Cardinal Zen said he was able to independently verify those reports. The problem, Zen writes, “is not the resignation of the legitimate Bishops, but the request to make place for the illegitimate and even excommunicated ones.”

A Vatican document of 1988 barred Roman Catholics from participating in the sacraments of the Patriotic Church, since the association “had broken all relationships with the pope” and would be “under the direct control of the government.”

In his letter titled “Dear friends in the media,” Cardinal Zen recounts a recent meeting with Pope Francis in the Vatican, in which the pontiff assured him that they would not “create another Mindszenty case,” referring to the heroic Cardinal Archbishop of Budapest, who was imprisoned by the Communists and subsequently replaced by the Vatican with a successor more to the likings of the Communist government. READ THE REST HERE

REMNANT COMMENT: The God of Surprises strikes again. We're to the point now where it's hats off to Francis for at least being true to his world. He said he was going to permanently change the Church (read: destroy it) in such a way that it could never be changed back, and that's exactly what he's doing.

One wonders what the orthodox cardinals and bishops are waiting for. Are they ever going to stand up and stop this man? Cardinal Burke, for example, where is his "formal correction"?  And for that matter, what's with the Society of St. Pius X?  Anybody heard from them lately?  Isn't it time for a J'accuse le Pape or perhaps another Letter to Confused Catholics?

God help us, how much worse does this have to get before the Catholic world rises up en masse and demands this papal dictator either cease and desist, or step down?

Archbishop Marcel Lefebvre, pray for us.

Published in Headline News Articles
[Comment Guidelines - Click to view]
The Remnant values the comments and input of our visitors. It’s no secret, however, that trolls exist, and trolls can do a lot of damage to a brand. Therefore, our comments are heavily monitored 24/7 by Remnant moderators around the country.  They have been instructed to remove demeaning, hostile, needlessly combative, racist, Christophobic comments, and streams not related to the storyline. Multiple comments from one person under a story are also discouraged. Capitalized sentences or comments will be removed (Internet shouting).
The Remnant comments sections are not designed for frequent personal blogging, on-going debates or theological or other disputes between commenters. Please understand that we pay our writers to defend The Remnant’s editorial positions. We thus acknowledge no moral obligation whatsoever to allow anyone and everyone to try to undermine our editorial policy and create a general nuisance on our website.  Therefore, Remnant moderators reserve the right to edit or remove comments, and comments do not necessarily represent the views of The Remnant.
back to top
Last modified on Wednesday, January 31, 2018
Tweet

More in this category: « VATICAN II UPDATE: Number of Quebec Parishes to Plummet The Bergoglification of Catholic Universities »