From TownHall.com:  If Facebook killed every conservative page overnight, there would be a huge outcry. On the other hand, if Facebook slowly strangled us to death, we’d fade away and would people even notice?

… In addition to that, as someone who has been working for a living in this business since 2005, let me drop a little truth bomb on you. We are now in a very oversaturated, corporation-dominated media environment. If you don’t already have a legacy website that captured traffic years ago and held onto it, huge traffic you can bring in from elsewhere, or millions of dollars to spend, your chances of getting a political website off the ground today are infinitesimal.

That gets to the heart of the biggest problem conservatives don’t realize that they have.

Social media IS the new public square. It’s the place you go when you want to reach out and find an audience. …….Except Facebook has for all intents and purposes announced that it’s killing off pages. So much for having a conservative voice there.

…Speaking of building up an audience on a platform for years and then getting screwed, YouTube is also doing that to conservatives.

… It’s easy to say, “Build your own social media website and compete with them,” but we’re talking about companies with billions of dollars and monopolistic control of their markets. The obvious solution would be to break these companies up or to at least acknowledge their importance to modern society and regulate them heavily, but conservatives don’t seem to be interested enough in either solution to even THREATEN to do this.  Read the whole thing HERE

REMNANT COMMENT: We have reason to suspect this is happening to us here at The Remnant, too. Our Facebook numbers have plummeted over the past few months, and they've done so during the same period when other Remnant numbers were on dramatic upswing.

It seems that liberal social media rewards conservative success with the blackball.

True, it could just be bad press. There are traditional Catholic blogs out there which hardly let a day go by without blasting The Remnant. But somehow I don't think that's it. A recent RTV video hit the half-million view mark in record time (for us) and is still climbing. But the same video shows negligible interest on Facebook. The sniping of petty bloggers could hardly account for that.

What's the solution? What it's always been for us: Don't put all the Remnant eggs in one basket; keep the Print-edition alive; promote the E-edition; build up RTV’s own non-YouTube platform. Do not allow the gods of the Internet to have total access to and control over the traditional Catholic press. Why not? Because it’s their ball and it’s their playground—and they will win every time.

But you can help us fight back against these Christophobes by spreading the word to family and friends that we're here and that we’re building alternatives. The Remnant is one of the few traditional Catholic organizations in the world that is not at all web dependent.

I really don't care what the "experts" say about newsprint having joined the dinosaurs--The Remnant will not give it up. We're putting more time and money into it, in fact, and what we're finding is a growing appreciation for that effort. No one can track your movements when you’re sitting in your favorite chair next to your fire reading a newspaper, and more and more folks are glad to have that peace of mind.

Big Brother Fatigue is giving newsprint an assist, I think.

My 20-year-old is off in college.  The other day he told me he'd taken a nine iron to his smart phone and went out and bought the oldest flip phone he could find. He tells me it was the most liberating thing he’s done in a long time. He also tells me lots of good kids his age are growing sick and tired of being chained to their devices.

For me it shed new light on the rather satanic scenario that plays out in the old Eagles’ song, Hotel California: “we are all just prisoners here, of our own device.” Indeed, we are…the difference being we can check out anytime we like and, if we want, we can actually leave.

The Remnant can help, in fact, by offering an alternative to the online prison: the old newspaper, folded in half on the coffee table, unplugged, non-surveilled. Quiet. Peaceful. No popups. No ads. No gimmicks. No dark side.

I hope you'll consider subscribing to our newspaper or, at the very least, help us build up a safe and Christocentric online alternative to Facebook and YouTube and all the rest by visiting our website every day and on your own, i.e., without having to be reminded by our social media “partners” which are, it would seem, actively working against us and against everything for which we stand, especially the Social Kingship of Our Lord and Savior Jesus Christ. 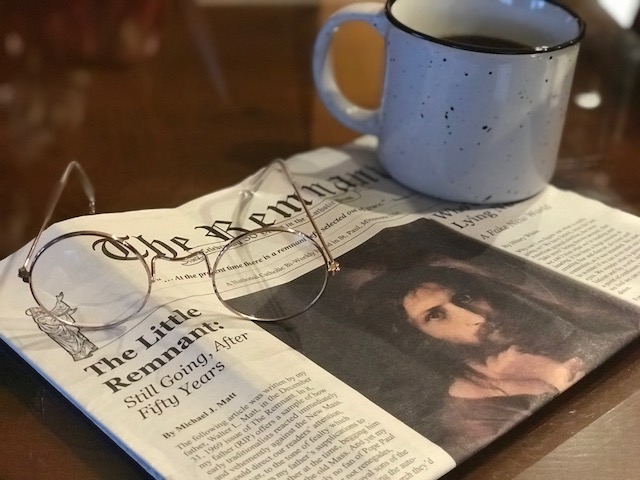 Published in Headline News Articles
[Comment Guidelines - Click to view]
The Remnant values the comments and input of our visitors. It’s no secret, however, that trolls exist, and trolls can do a lot of damage to a brand. Therefore, our comments are heavily monitored 24/7 by Remnant moderators around the country.  They have been instructed to remove demeaning, hostile, needlessly combative, racist, Christophobic comments, and streams not related to the storyline. Multiple comments from one person under a story are also discouraged. Capitalized sentences or comments will be removed (Internet shouting).
The Remnant comments sections are not designed for frequent personal blogging, on-going debates or theological or other disputes between commenters. Please understand that we pay our writers to defend The Remnant’s editorial positions. We thus acknowledge no moral obligation whatsoever to allow anyone and everyone to try to undermine our editorial policy and create a general nuisance on our website.  Therefore, Remnant moderators reserve the right to edit or remove comments, and comments do not necessarily represent the views of The Remnant.
back to top
Last modified on Friday, February 9, 2018
Tweet