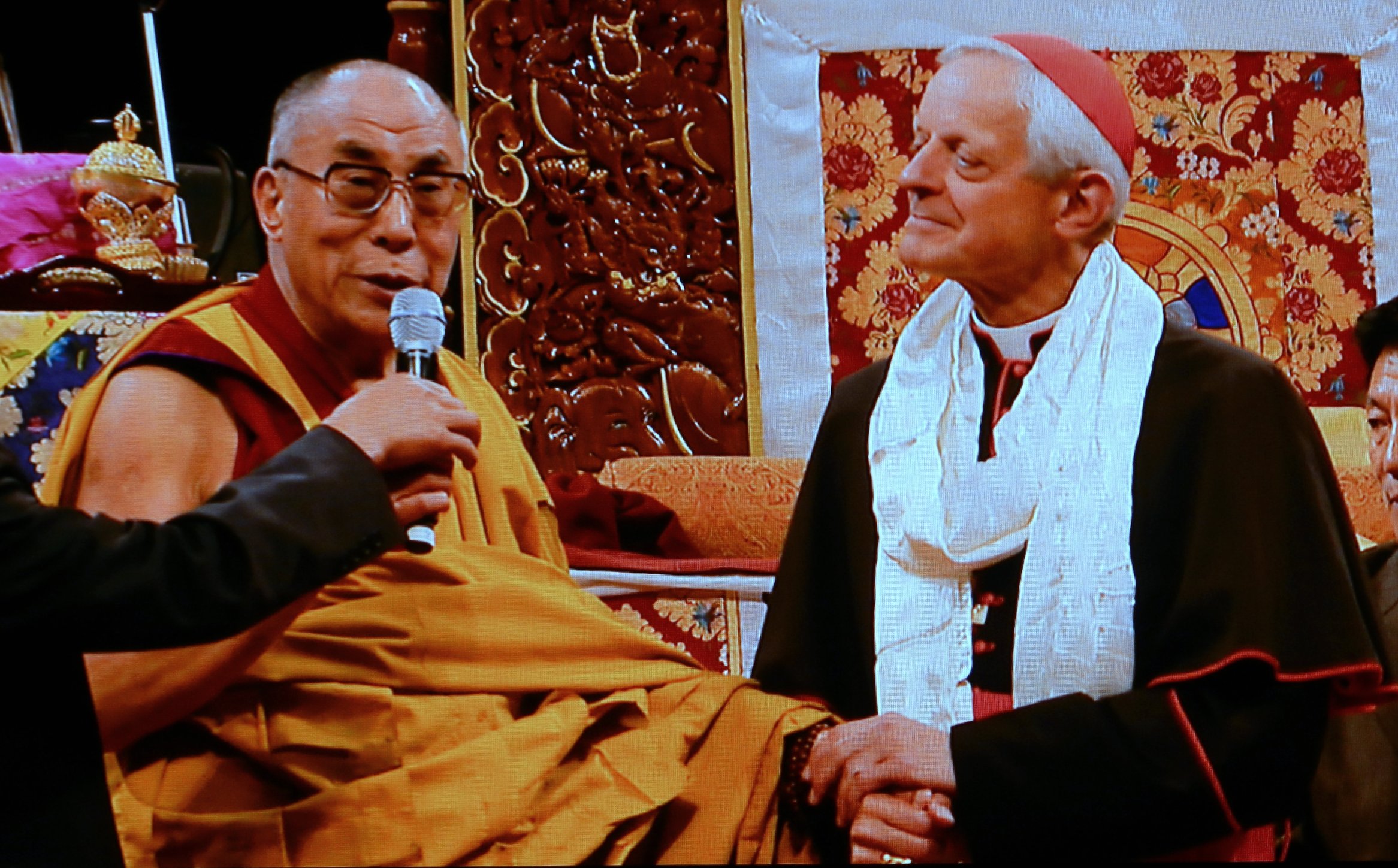 Donald William Wuerl (born November 12, 1940) is the sixth Archbishop of Washington, serving since 2006. He was elevated to the cardinalate by Pope Benedict XVI in 2010.

In this photo from a couple years back, Cardinal Wuerl welcomes the 14th Dalai Lama. During their moment together, they spoke about the ecumenical spirit while holding hands--and this just after His Holiness had given the Cardinal a khata, Kalachakra for World Peace.

The Cardinal recalled his first meeting of His Holiness in the 1970s and subsequently during the Assisi summit of religious leaders in 1986.

Missionaries of Mercy: Catholic Priests of the Titanic

The three priests, including one now known as a martyr, offered spiritual comfort to fellow passengers on the doomed ship. They, along with 1500 others, perished in the icy Atlantic in 1912.

Three Catholic priests, including one hailed by Pope Saint Pius X as a martyr for the faith, were among the victims of the Titanic disaster. All three of the European-born priests – Father Juozas Montvila of Lithuania, Father Josef Peruschitz, O.S.B. of Bavaria, and English rector Father Thomas Byles – are said to have declined lifeboats in order to offer spiritual aid to travelers who perished in the shipwreck, which claimed 1503 lives.

Father speaks to First Communicants about the importance of Confession. Here's the beautiful traditional Catholic teaching so ignored by the Church of encounter, accompaniment and a dozen other meaningless buzz words.
Published in Remnant Television
Tagged under
Read more... 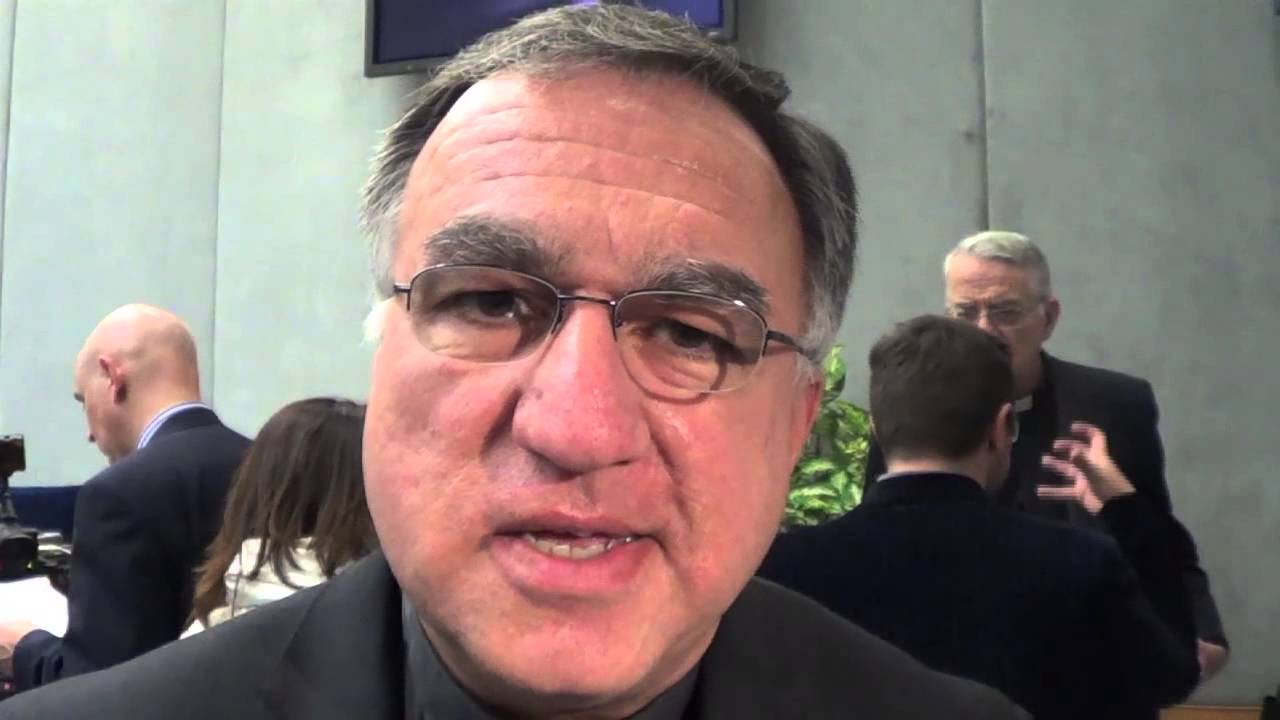 Catholic Action and the Kingship of Christ: Tradition Rising

An Interview of Michael J. Matt

This just in from the Catholic Herald: "The bishops of England and Wales have appealed to Rome to change the Good Friday prayer for Jews as it is said in the Extraordinary Form.

The prayer reads: “Let us also pray for the Jews: that our God and Lord may illuminate their hearts, that they acknowledge Jesus Christ is the Saviour of all men.”

The prayer was revised by Benedict XVI in 2008 after he permitted wider celebration of Mass in the older form with his apostolic letter Summorum Pontificum. Previously the prayer had included references to the “blindness” of Jewish people and their “immersion in darkness”.

But the prayer remains different from the Novus Ordo version introduced after the Second Vatican Council, which reads: “Let us pray for the Jewish people, the first to hear the word of God, that they may continue to grow in the love of his name and in faithfulness to his covenant.”


International Federation of Una Voce Press Release:
On the Good Friday 'Prayer for the Jews'

For immediate release.
The Prayer for the Jews used in the Extraordinary Form Good Friday Liturgy continues to be a source of comment and misunderstanding, and the FIUV wishes to respond as follows.

Statement by the President of the FIUV, Felipe Alanís Suárez

It was to avoid misunderstandings of the Prayer for the Jews that Pope Benedict XVI composed the 2008 version of the prayer, which is clearly based on what is essential to Christianity: the acceptance of Christ as the saviour of the whole world, and the desire that all persons be saved.

Jews are mentioned because of their special role in the history of salvation, and the special concern we must have for our ‘elder brothers’ (as Pope St John Paul II called them). The prayer looks forward to the incorporation of the Jewish people, of which Our Lord Jesus Christ and His first disciples were all members, in the salvation won for the human race by Christ on the Cross, a reconciliation which, as St Paul teaches, will be fulfilled only towards the end of history.

The FIUV is convinced that any possible continuing misunderstanding regarding the Good Friday Prayer for the Jews can be resolved in the context of the Magisterium of the Church, without veiling the treasures of our Faith.

We, as faithful attached to the Extraordinary Form of the Roman Rite, acknowledge that to ask of our Lord for the grace of sharing with all our brothers the joy of salvation in Jesus Christ, is an act of humility and selfless love, and a spiritual work of mercy.

The FIUV entirely rejects all hatred and hostility towards the Jewish people, and all forms of unjust discrimination.

1.     Although the Novus Ordo Good Friday Prayer for the Jews does not explicitly refer to Jews acknowledging Christ as Saviour, other prayers in the revised liturgy do so. The Novus Ordo Vespers of Easter Sunday includes the prayer ‘Let Israel recognize in you the Messiah it has longed for’; the Morning Office of 30th December includes the prayer ‘Christ, Son of David, fulfilment of the prophecies, may the Jewish people accept you as their awaited Deliverer [Latin: Messiah].’

2.     In their daily prayers, Jews pray for the conversion of ‘all of the impious of the earth’. Rabbi Jacob Neusner, responding to criticisms of the 2008 Prayer for the Jews, pointed out the parallel with the Prayer for the Jews and remarked ‘The Catholic prayer manifests the same altruistic spirit that characterizes the faith of Judaism.’ (Die Tagespost,23 Feb 2008)[1]

3.     Walter, Cardinal Kasper, defended the 2008 prayer, explaining that a hope that Jews accept Christ, which may be fulfilled only by God, rather than by targeted proselytism, and eschatologically (at the end of history), is nothing more than a necessary consequence of the Christian faith.

A sincere dialogue between Jews and Christians, …is possible only, on the one hand, on the basis of a shared faith in one God, creator of heaven and earth, and in the promises made to Abraham and to the Fathers; and on the other, in the awareness and respect of the fundamental difference that consists in faith in Jesus as Christ and Redeemer of all men. (L'Osservatore Romano 10th April 2008)[2]

1.     The prayer used today in the Extraordinary Form was composed by Pope Benedict XVI in 2008, in response to concerns about the wording of the previously used prayer, and runs as follows:

Let us also pray for the Jews: that our God and Lord may illuminate their hearts, that they acknowledge Jesus Christ is the Saviour of all men.

2.     It is recited, in Latin, once a year, in the small number of churches worldwide where the Good Friday Liturgy is celebrated in the Extraordinary Form. It forms part of a series of prayers for different categories of persons, both within and without the Church, the latter including heretics and pagans. In each case the celebrant prays for God’s graces for them. This pattern is followed in the reformed, 1970 (‘Novus Ordo’) Missal, although the wording of the prayers is different.[3]

3.     The prayer is based on Scripture, notably St Paul. The image of ‘light’ penetrating the hearts of the Jews is drawn from 2 Cor 4:3-6; St Paul speaks of the eventual conversion of the Jews in Romans 11:25-26. Romans 11:29 says of the Jewish Covenant that God ‘never revokes His promises’, which is quoted by Vatican II’s Nostra aetate, and by Pope St John Paul II, as the basis for a special affection and respect which Christians owe the Jewish people.[4]

The FIUV (Foederatio Internationalis Una Voce) is the international federation of groups of Catholics attached to the Extraordinary Form of the Roman Rite, the Vetus Ordo or Traditional Mass.

[1] The full text of the article can be seen in English here: http://chiesa.espresso.repubblica.it/articolo/193041?eng=y

[2] The full text can be found in English here: http://chiesa.espresso.repubblica.it/articolo/197381?eng=y

[3] The different versions of the Good Friday Prayer for the Jews can be found on Wikipedia: https://en.wikipedia.org/wiki/Good_Friday_prayer_for_the_Jews

[4] Romans 11:29: ‘For the gifts and the calling of God are without repentance.’ Quoted by Nostra aetate 4, and Pope St Jophn Paul II in his Address to the Jewish Community of Berlin on 17th November 1980. 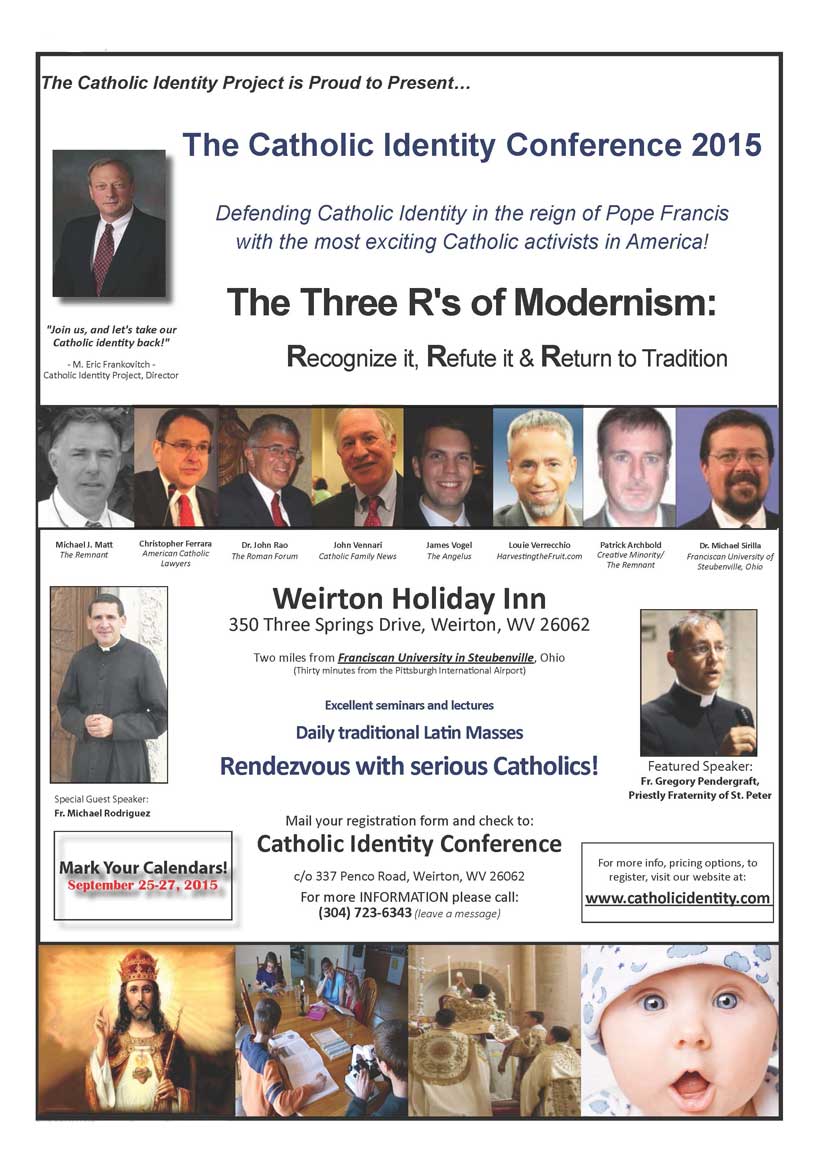 A Holy Saturday Sermon that will Make You Long for Heaven


A Holy Saturday Prayer to Be Joined with Christ in Death

O Lord, Your sorrowing Mother stood by Your Cross; help us in our sorrows to share Your sufferings. Like the seed buried in the ground, You have produced the harvest of eternal life for us; make us always dead to sin and alive to God. Shepard of all, in death you remained hidden from the world; teach us to love our hidden spiritual life with You and the Father.

The 2nd Annual St. Joseph’s Lenten Pilgrimage in Lacombe, La, was a great success, and proves that the Latin Mass in the region of the Archdiocese of New Orleans, north of Lake Pontchartrain, is thriving.

More than 50 people (14 of them under the age of 12) kicked off the Lenten season with a nearly 10 mile trek from the Mandeville Trace to Sacred Heart in Lacombe. There was a men’s brigade and a women’s brigade.

Our chaplain, Fr. Jambon, walked between the brigades, hearing confession and giving spiritual counsel. At the conclusion of the pilgrimage, Fr. Jambon offered Benediction, confessions, and a presentation and blessing of a relic of Our Lady’s veil. It was a beautiful day and a wonderful way to start this penitential season.

Published in Fetzen Fliegen
Tagged under
Read more...
Page 5 of 10