NEWSWEEK:  Alex Villanueva, the Los Angeles County Sheriff who has been called "the Donald Trump of L.A. County," has said that his office will not enforce the county's recently re-instated mask mandate. Villanueva says the mandate is "not backed by science."

The county's indoor mask mandate went back into effect on Saturday by order of the Los Angeles County Department of Public Health (DPH).

"Forcing the vaccinated and those who already contracted COVID-19 to wear masks indoors is not backed by science and contradicts the U.S. Centers for Disease Control and Prevention (CDC) guidelines," he claimed. "The underfunded/defunded Los Angeles County Sheriff's Department will not expend our limited resources.”

REMNANT COMMENT: So here we go again. They failed to intimidate the thinking people in this country into getting the jab, and so now they're just going to start making things up again.

A few weeks ago, I sat and listened to Tony Fauci tell the children running CNN that the vaccines were perfectly effective against the variants, so just "get vaccinated now!" and everything would be hunky dory.

Uncle Joe Biden said we could have a 'lil cookout' on the Fourth of July so long as most of us got vaccinated by then.

Well, half the country apparently told Biden to pound sand, and now--waddaya know!--the variants are terrifying the vaccines into ineffectiveness and we all need to mask up again.

Bottom line: If you're still falling for these scary COVID stories for children, that's on you. Maybe you should pray to the Easter Bunny... or something.

Meanwhile, thanks to Sheriff Villanueva for remaining one of the few adults left in the entire state of California. 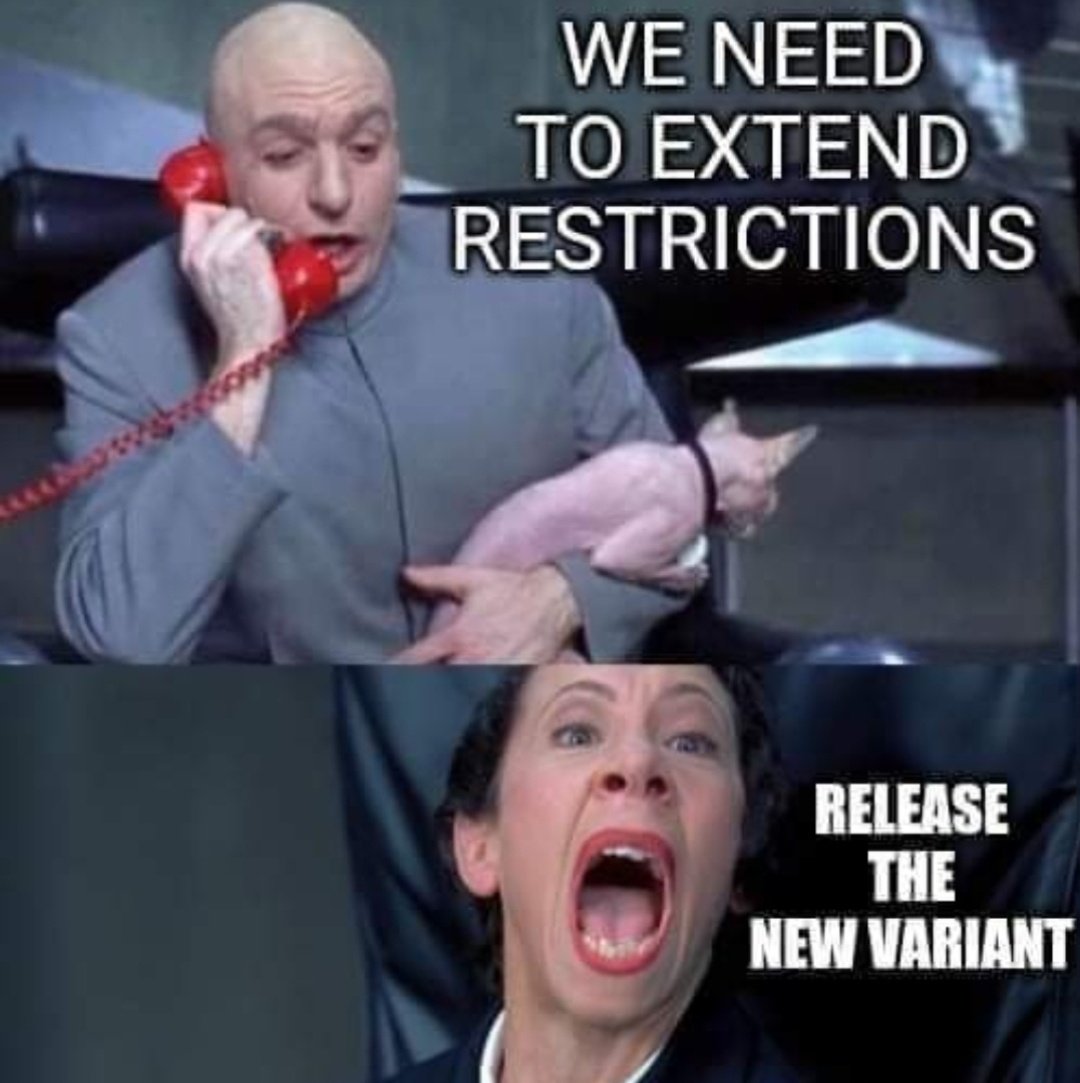 RIGID INTOLERANCE: Why Does Francis Hate the Latin Mass?

In this Remnant-TV.com exclusive, Michael J. Matt considers the question of why—in the middle of global upheaval, apostasy, and pandemic—Francis is focusing his papal sights not a church wracked with apostasy but rather on the small remnant of believers who wish simply to attend the Mass of their fathers.

Even non-Catholics are perplexed by Francis’ unprecedented decision to contradict his immediate predecessor, Pope Benedict XVI, who freed the Latin Mass and insisted it was never (and could never be) abrogated.

Dear Friends:  Don’t be discouraged. God is in charge of everything, and this would not be happening if He did not allow it. This has all happened before. I know, I remember, I lived through it. This is a chastisement, yes, but it does not alter what we are called to do:  We must know, love, and serve God, and resist those who do not.

Francis has no power to change that.

As YouTube continues to harass RTV--actually pulling videos down now and barring us from posting new ones for the next week--we're offering this short video on Remnant-TV.com exclusively.

Rumors out of Rome have it that Pope Francis may move against Summorum Pontificum as soon as tomorrow morning.  I believe this short clip will help us gear up for the resistance that will be required, and since it is a short clip, it's easily shared between friends and family on the eve of this foreboding event.

Looking Back to the Future of the Catholic Church

After the rise of the most problematic pontificate in the history of the papacy, many hundreds of thousands have had the blindfolds removed when it comes to the Modernist revolution and infiltration of the Catholic Church.

In this episode of The Editor’s Desk, Michael J. Matt discussed the following topics:

- The Left goes so far off the rails that even yesterday’s rock ‘n’ roll bad boys are standing up to defend patriotic Americans. KISS that, Mr. Biden!
- Joe Biden says he’s going to come knocking on our doors, Ronald Reagan says “Aww Shaddup!”
- The Revolution consumes its own. The EU Parliament votes to criminalize those religious extremists who oppose abortion and contraception, and guess what? Those “religious extremists” include Opus Dei.
- The Bishop of Dijon, France expels Traditional Catholics for the same “crime” that sent the 16 Carmelite of Compiègne to the guillotine. The Bishop of Dijon, by the way, says he’s only following Francis’ agenda.
- So, why in the middle of hell on earth is the most recognized spiritual leader in the world engaging in a witch hunt against Traditional Catholics?
- Why Traditional Catholicism IS the spear.

CONCELEBRATE OR GO TO HELL: FSSP Expelled in France

Edward Pentin | DIJON, France — A French archbishop who plans to expel a traditional priestly fraternity from his diocese because they won’t concelebrate Masses has said he took the decision in anticipation of a new decree, or motu proprio, that Pope Francis is reported to be preparing to publish.

“You will have a new motu proprio in the coming days or weeks,” Archbishop Roland Minnerath of Dijon was filmed telling a group of faithful who were protesting against the archbishop’s decision outside the city’s archdiocesan offices on June 26.

On June 16, Catholic News Agency reported that Archbishop Minnerath would be expelling the Priestly Fraternity of St. Peter (FSSP) from the Basilica of Fontaine-lès-Dijon, St. Bernard of Clairvaux’s birthplace, at the end of the summer.

Father Roch Perrel, the FSSP’s superior in Dijon, told CNA that the archbishop had made the decision because the FSSP’s priests fail to follow a practice promoted at the Second Vatican Council of two or more priests concelebrating at the altar.

“[Archbishop Minnerath] wanted to concelebrate the Chrism Mass during Holy Week, but we haven’t done it for years, as we have reservations about the new [Paul VI] Mass and we don’t celebrate at the same pace,” said Father Perrel, who went on to emphasize that, according to Canon 902 of the Code of Canon Law, no one can be forced to concelebrate.

“The archbishop had first accepted [their refusal], although he didn’t like it, but now he is kicking us out for this motive, and in this sense, he is abusing his authority,” Father Perrel said, adding that the archbishop had been wanting to transfer the community a year ago.

The archbishop’s decision has caused an outcry in the parish and came in the context of well-sourced reports that give credence to the archbishop’s comments that Pope Francis is drafting a motu proprio that aims to restrict the celebration of Mass in the Extraordinary Form — news first reported May 25 on the Italian website MessainLatino.

REMNANT COMMENT: Perhaps this will help our critics understand why The Remnant has been vehemently opposed to a Society of St. Pius X “reconciliation” under Francis?

If this papal plan were implemented, just imagine how much worse it would be right now if Bishop Bernard Fellay had "regularized" the SSPX a couple of years ago. There would be no recourse and no bargaining chips either. Why? Because, as it is, if the Vatican shuts down the FSSP and the other Ecclesia Dei communities, millions of traditional Catholics will just march on over to the SSPX.

Archbishop Lefebvre was right when he said that the only way his Society could reconcile with the Vatican at this point would be if the Vatican were to return to the Catholic Faith. Until that happens, the defense of the Faith comes first... even if that should incur the wrath of Pachamama herself.

By the way, I'm convinced that the vast majority of FSSP priests will not go along with the anti-SP insanity either. In Dijon they're already refusing to back down, just as they'll do all over the world if this papal persecution continues.

If Francis wants a war all he has to do is carry on. He will have squandered the last bit of credibility he has left, and he will look even weaker in the eyes of his globalist handlers.

In other words, go ahead Francis. Knock yourself out!  MJM

Joe Biden is now promising to come knocking on our door in order to enforce the psychotic policies his handlers need in order to transform America into the USSA.

LESSONS OF COVID: Why Francis Fears Us

Michael J. Matt delivers a lecture at The Roman Forum on the lessons learned from COVID, when traditional Catholicism led the charge against the Globalist tyrants who declared religious ceremonies a "non-essential service."

Looking back over the past 40 years, Michael argues that it's time stop circling the wagons. We're on the front lines, so let's start acting like it.

THE TRUMP TWEETS: Donald Trump on the Southern Border Crisis

Heading to the Southern Border, which has never, in our Country’s long history, been worse. We had the most successful Border policy in American history—and now we have, by far, the least successful policy. People are coming in by the millions. They are destroying our Country! See you soon.

Published in Headline News Around the World
Tagged under
Read more...
Page 4 of 270