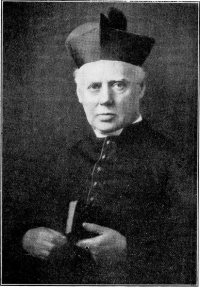 In the early 1900’s Britain set up a “Royal Commission on Divorce and Matrimonial Causes” in order to consider new legislation liberalizing divorce laws in the country. As part of the process, experts were called before the Commission in order to acquire diverse opinions about the issue. On 27 June 1910, a Roman Catholic priest, Monsignor James Moyes was called to testify before the Commission.

According to Msgr. Moyes' Wikipedia entry:

Moyes was born Edinburgh, Scotland. He was educated in Ireland, France, and Rome at the Venerabile. Ordained into the priesthood in 1875, he was later appointed professor at St Bede's College, Manchester, England. He was appointed canon theologian of Salford Chapter, 1891, and of the Westminster Chapter, 1895. In 1896, he served on the Papal Commission in Rome on Anglican matters on which he was an authority. In 1903 he was chosen as sub-delegate Apostolic for the Cause of English Martyrs. He edited the Dublin Review until 1903, contributed a vast amount of controversial literature on theological subjects to The Tablet, and wrote Aspects of Anglicanism, 1906. Moyes died in London, England in 1927.


The following contains excerpts of Msgr. Moyes’ testimony to the Royal Commission regarding Catholic teaching on marriage. This testimony is especially relevant since the release of Francis’ tragic exhortation Amoris Laetitia, which misrepresents Catholic teaching on the sacraments of marriage, penance, and the Eucharist. Here, Msgr. Moyes' sets the record straight as to what the Church's unchangeable teaching is on marriage, divorce, absolution, and reception of the Eucharist.


(Chairman.) Would you kindly inform us what is your exact position in the Church?

…I am Canon of the Archdiocese of Westminster, and also a Prelate of the Roman Court.

I think the Secretary communicated with the Archbishop of Westminster with the view of asking if he desired that someone should attend on behalf of the Catholic Church, and that you have been good enough to attend by his request ?

…Would you kindly read the answers you desire to make?

The answer in my statement to that first part would be:—“If I am asked to give an answer to this question, and the grounds on which I base it, I can only say that believing, as a Catholic, that divorce in its ordinary acceptance as a dissolution of  the bond of matrimony once validly contracted, and consummated, is contrary to the teaching of Christ, and therein to Divine law, and inimical to the interests of society, I am conscientiously opposed to the granting of such divorce in any court and under any conditions. I can best express what I feel in regard to the proposal by stating in brief the authoritative doctrine of the Catholic Church to which I belong." Shall I state the grounds?

If you please. This is a very convenient way of taking what you want to say, and the shortest way.

Well, the doctrine on which I base my belief, and the Church of which I am a member, is that—

(1) Marriage between Christians is not only a contract, but a sacrament of the New Law, in which the union of the parties is wrought and ratified by God. In this sacrament, the parties themselves— not any officiating clergyman—are the ministers, each giving consent to the other, and God accepting and sealing the consent of both.

(2) When such marriage is validly celebrated between competent persons, and is consummated, so that there is fulfilled in their union the words of Our Lord, ‘ and they two shall be in one flesh’ (Mark 1:. 8), there exists between them a God-made bond of matrimony, or vinculum matrimonii I n its completeness. The knot is of God's own knitting, and Christ teaches that it is God Himself who is the ‘Joiner.’

(3) Because the union is thus of God’s making and a Divine work, it has the paramount and immutable character of Divine law, and is absolutely indissoluble except by the death of either party. It cannot be unmade by any act of the parties themselves, seeing that it is a covenant which they themselves alone have not made, but is one into which God Himself has entered as the Joiner. As a matter of Divine law, or God's own ordinance, it is intangible by any created power, and no human authority whether ecclesiastical or civil, can have any authority to dissolve it As neither the Pope nor the Church can claim to override or alter anything which is of Divine law, neither can exercise any dispensing power to loose the complete and consummated bond of matrimony. ‘ What God has joined together, no man may put asunder.’ The Catholic Church teaches that this principle laid down by Christ is absolute, and consequently that the words of Christ, ‘except it be for fornication’ (Matt. xix. 9) and ‘excepting for cause of fornication’ (Matt. v. 32), constitute a clause of exception, applying solely to the unlawfulness of separation or putting away of wife or husband, but not to the unlawfulness of re marriage during the life-time of either. That is to say, unfaithfulness may justify separation, but does not dissolve the bond of matrimony by which they are still husband and wife, and any re-marriage with others during the life-time of either becomes adultery. The texts of St. Matthew, thus construed, fall into harmony with those of St. Mark (x. 11) and St. Luke (xvi. 18) and St. Paul (1. Cor. 10), in which the prohibition is stated absolutely and without exception.

(4-) Anything which is called by the name of ‘divorce’ in the Catholic Church can never include any dissolution of the bond of matrimony ratified and consummated. By this bond the man remains the husband of the wife, and the woman remains the wife of the husband, and as no Christian can have at the same time two wives or two husbands, it follows that any attempted marriage of either during the life-time of the other with any third person is ipso facto null, and any cohabitation with such person is adulterous. The term divorce is, however, sometimes applied to the two following causes, which do not involve any dissolution of the bond of matrimony:

(a) Separation a mensa et thoro, which may be granted for sufficient grounds, such as unfaithfulness or cruelty, &,

(b) Decree of nullity, in which a supposed marriage, owing to certain initial defects, is declared to have been null, from the beginning. Such nullity must be one arising from some antecedent cause, and not from any cause supervening after the marriage. The judgment does not affect the nullity, but merely declares it It does not dissolve the vinculum, but affirms that it never existed…

Regarding, therefore, any divorce which professes to dissolve the bond of matrimony once valid and consummated, and to set parties free to remarry, as an evil the contrary to the teaching of Christ, who wrought the regeneration of society mainly by establishing the unity and indissolubility of marriage, and therein the stability of the Christian home, Catholics desire its abolition, and especially that the poorer classes may be protected from its disintegration, and hope that any legislation undertaken in regard of it may be rather to restrict than to extend the facilities for a concession which they believe to be morally wrong and socially disruptive."….

(Sir Frederick Treves.) I would just ask in what way the teaching of the Catholic Church in this matter holds divorce to be inimical to the interests of society?

What we believe is that the Christian home is the very centre and the source or the cell of the social organism, so to say, and that everything depends on its purity and stability for the healthy state of society; and we believe that Christ, in regenerating and healing society, began by securing the indissolubility of the bond of matrimony, restoring it to its original condition, and securing the permanent relation between husband and wife, and the right of the woman to stand with fixity of tenure at the side of her husband, and that both should exercise a permanent function of education with regard to their children ; and in that we have an important interest to society, which is gravely menaced by divorce.

(Sir William Anson) I understand that, looked at as a social question, you regard the family as the basis of society?

And the security of marriage as practically the basis of the family existence?

In this country, would you tell me, how does the system work? Supposing a Roman Catholic marriage, and the husband, let us say, who has been wronged were to go to the Divorce Court and get a divorce from his wife on the ground of adultery, what would be done?

In the first place he would commit a sin against the Church law; as long as he had not repented of the sin he could not receive absolution or Holy Communion; or if scandal were publicly given he would be regarded as a public sinner who could not, according to the law of the Church, receive Holy Communion.

If he repented he could be absolved?

Supposing he went further and proceeded to remarry, he would then be excommunicated, I suppose?

If he married any other person than the person from whom he was divorced, in that case, according to the mind and teaching of the Catholic Church, he would be regarded as a public sinner and unable to receive absolution or Holy Communion.

If he undertook to leave his second wife and never to cohabit with her, could he obtain absolution?

Yes, provided he made due satisfaction for the scandal given.

Even though the marriage takes place?

Yes; if he declared to the Church his sorrow for what he had done and his intention not to live with or cohabit with that person, in that case he would be absolved.

[Comment Guidelines - Click to view]
The Remnant values the comments and input of our visitors. It’s no secret, however, that trolls exist, and trolls can do a lot of damage to a brand. Therefore, our comments are heavily monitored 24/7 by Remnant moderators around the country.  They have been instructed to remove demeaning, hostile, needlessly combative, racist, Christophobic comments, and streams not related to the storyline. Multiple comments from one person under a story are also discouraged. Capitalized sentences or comments will be removed (Internet shouting).
The Remnant comments sections are not designed for frequent personal blogging, on-going debates or theological or other disputes between commenters. Please understand that we pay our writers to defend The Remnant’s editorial positions. We thus acknowledge no moral obligation whatsoever to allow anyone and everyone to try to undermine our editorial policy and create a general nuisance on our website.  Therefore, Remnant moderators reserve the right to edit or remove comments, and comments do not necessarily represent the views of The Remnant.
Read 7859 times Last modified on Tuesday, April 12, 2016