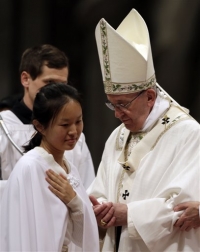 Today at Breitbart: "Just as he did during his Christmas address, Pope Francis on Easter remembered the suffering of migrants from the Middle East and North Africa, but this time condemned those who wish to prevent them from crossing borders.During his urbi et orbi address from St. Peter’s Basilica in the Vatican, the pope remembered the suffering of people from Syria, Libya and Yemen and urged Christians to reach out to them."

“The Easter message of the risen Christ,” he said, is “a message of life for all humanity, echoes down the ages and invites us not to forget those men and women seeking a better future, an ever more numerous throng of migrants and refugees — including many children — fleeing from war, hunger, poverty and social injustice.”

He had particularly harsh words for those who wish to prevent migrants from seeking safety outside their homeland.

“All too often, these brothers and sisters of ours meet along the way with death or, in any event, rejection by those who could offer them welcome and assistance.” READ MORE HERE

REMNANT COMMENT: Well this should make George Soros and the 'world without borders' crackpots happy. Soros, who has even denounced his native Hungary for protecting its borders and culture, seems to be ghostwriting homilies for Pope Francis the Great lately. The radical billionaire financier behind almost every border-busting project in Europe and the U.S. -- a man who has been called the 'biggest mass migration-promoting coyote on the planet' -- couldn't have asked for a better pope.


Published in Headline News Articles
[Comment Guidelines - Click to view]
The Remnant values the comments and input of our visitors. It’s no secret, however, that trolls exist, and trolls can do a lot of damage to a brand. Therefore, our comments are heavily monitored 24/7 by Remnant moderators around the country.  They have been instructed to remove demeaning, hostile, needlessly combative, racist, Christophobic comments, and streams not related to the storyline. Multiple comments from one person under a story are also discouraged. Capitalized sentences or comments will be removed (Internet shouting).
The Remnant comments sections are not designed for frequent personal blogging, on-going debates or theological or other disputes between commenters. Please understand that we pay our writers to defend The Remnant’s editorial positions. We thus acknowledge no moral obligation whatsoever to allow anyone and everyone to try to undermine our editorial policy and create a general nuisance on our website.  Therefore, Remnant moderators reserve the right to edit or remove comments, and comments do not necessarily represent the views of The Remnant.
back to top
Last modified on Monday, March 28, 2016
Tweet

More in this category: « Pope’s Easter Message Condemns Those Who Prevent Migrants from Crossing Borders Mother Angelica’s Little-Known Love of the Latin Mass »