The Roman Forum in Italy Now Accepting Reservations: Half a Millennium of Total Depravity (1517-2017) 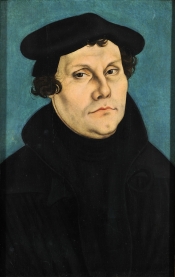 2017 will mark the five hundredth anniversary of Luther’s appearance on the public scene. It is absolutely certain that most of our ecclesiastical leaders, foot soldiers of the Zeitgeist that they are, will turn this date into a year long paean to the accomplishments of Luther & Company. In short, it will be the year of their “Catholic” apotheosis---and precisely at the moment when the world created through their distorted vision is actually in its death agony.

2016, the eve of this coming onslaught, must be a year of militant Catholic preparation for answering what will be a terrible travesty of the truth. It is also intellectually appropriate to use it for this purpose because in doing so one points to the fact that 1517 in and of itself was the not the original source of our woes.

Join us at one of the most beautiful places on earth.

By 1516 all of the spiritual, intellectual, political, and social diseases that had hovered for centuries about the Camp of the Saints had been gathered together, and were ready for Luther to inject them as one “mega malady” into the lymphatic system of Catholic Christendom. All of these diseases manifested a sick mentality rejecting the need for the individual and his entire environment to be corrected, perfected, and transformed under the Kingship of Christ--- with the aid of Faith, Grace, and Reason on the one hand, and both supernatural and natural social authority on the other. All were ready for Luther to “incarnate” them into every nook and cranny of what we call “modernity” through the mediation of his doctrine of “total depravity”. And this pre-Lutheran contribution to the work of the Protestant Reformation deserves its five hundredth anniversary lamentation in 2016 before the 2017 kermesse begins.

The Roman Forum will be bringing to its twenty-fourth annual Gardone Summer Symposium an international, interdisciplinary faculty that will explore on a theological, philosophical, historical, political, economic, sociological, psychological, and artistic level “all those anti-intellectualist, anti-institutional forces”; “all the crude, backwoods, obscurantist theories bred of the degrading pride that comes with chosen ignorance, the pride of men ignorant because unable to be wise except through the wisdom of others” that lay behind Luther and were then galvanized by him to create the world in which they have now “had their fling” for five hundred disastrous years. (Philip Hughes, A History of the Church, Sheed & Ward, 1949, III, 529).

Join us in 2016 in a spiritual, intellectual, and social experience of extraordinary excitement to gird your loins for a “culture war” of monumental proportion in 2017; a war in which an imminent “Catholic” apotheosis of Luther must be defeated.


Accommodation and lectures are at the Locanda agli Angeli and the Hotel Villa Sofia in Gardone Sopra, on Lake Garda, in the foothills of the Alps in northern Italy. Both hotels, with swimming pools of their own, are only a ten-minute walk from the lakefront, where free, clean beaches with a number of amenities can be found. Meals are taken at the Angeli and at other trattorie several minutes walk away. Mass is in the parish church, also within walking distance. Gardone is within easy traveling distance of the opera season in Verona, Venice, Trent, Brescia, Milan, Ravenna, Pavia and Padua. The region offers opportunities not only for swimming, but for hiking, biking, boating and scenic walks as well. Each day involves two lectures with discussion (morning and pre-dinner), and Sung Mass in the Extraordinary Rite (Tridentine Mass) at noon. Other masses are offered throughout the day. There are no lectures on Sundays. Musical and theatrical entertainments take place in the garden of the Angeli and in the Piazza dei Caduti in the evenings after dinner.

First time applicants only must include name, address, telephone number, e-mail, date of birth, occupation, academic degrees attained or pending, and the names and phone numbers of two references. Application should be made as soon as possible as there are only sixty places available. The full cost of the Gardone program in a double occupancy room is $2,900. This includes tuition, room and board (very ample breakfast and dinner with wine, beer, and other beverages at will; all gratuities also), transportation to and from Malpensa Airport in Milan, and a boat excursion on the lake. Single rooms are extra, their price depending upon the room concerned. A number of full and partial scholarships may be available. Preference for scholarships will be given to professors, students, clergy, and seminarians. Nevertheless, anyone who genuinely cannot afford the full tuition and believes himself to be a worthy candidate for assistance may apply. Please consider giving a tax-deductible donation to support the attendance of a speaker, a member of the clergy, a seminarian, or a student. A special thanks in this regard to the health care professionals at I-DOhC (www.occusystems.com). Send all applications, deposits, payments, and donations either through PayPal or directly to:

This email address is being protected from spambots. You need JavaScript enabled to view it.

“Even if the wounds of this shattered world enmesh you, and the sea in turmoil bears you along in but one surviving ship, it would still befit you to maintain your enthusiasm for studies unimpaired. Why should lasting values tremble if transient things fall?”  (Prosper of Aquitaine)

[Comment Guidelines - Click to view]
The Remnant values the comments and input of our visitors. It’s no secret, however, that trolls exist, and trolls can do a lot of damage to a brand. Therefore, our comments are heavily monitored 24/7 by Remnant moderators around the country.  They have been instructed to remove demeaning, hostile, needlessly combative, racist, Christophobic comments, and streams not related to the storyline. Multiple comments from one person under a story are also discouraged. Capitalized sentences or comments will be removed (Internet shouting).
The Remnant comments sections are not designed for frequent personal blogging, on-going debates or theological or other disputes between commenters. Please understand that we pay our writers to defend The Remnant’s editorial positions. We thus acknowledge no moral obligation whatsoever to allow anyone and everyone to try to undermine our editorial policy and create a general nuisance on our website.  Therefore, Remnant moderators reserve the right to edit or remove comments, and comments do not necessarily represent the views of The Remnant.
Last modified on Saturday, March 26, 2016