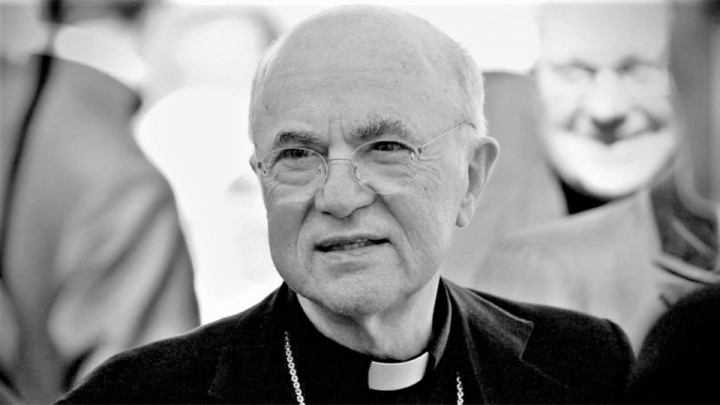 The article The Viganò Case: The Archbishop and His Double, which appeared yesterday at Corrispondenza Romana[1] in both Italian and English, signed by Professor Roberto de Mattei, has been pointed out to me.

I am unable not to express my amazement at the statements that an illustrious Catholic intellectual, hailed as a champion of Tradition and who has not spared the Hierarchy criticism that is at times severe but always carefully considered and just, felt that he had to make in my regard. In reality, it would have been enough to consult me verbally or by letter in order to dispel his suspicions and feel reassured that all of my writings, declarations, and interviews which I have given are the fruit of a maturation of convictions of which I proudly claim full paternity.

I am absolutely determined to continue my apostolic mission for the salvation of souls.

The idea that I have a “double” must be the fruit of some adviser to whom Professor de Mattei has improvidently lent his faith, without realizing that by doing so he has exposed himself to the public refutation of completely unfounded allegations, which also sound, if I may be allowed to say so, not very charitable in my regard. I am therefore taking the opportunity afforded by his article to deny his impudent and fanciful theses, reassuring those who have the goodness to read me and listen to me that there is no ghost writer, and that by the grace of God I still have full possession of my faculties, I am not manipulated by anyone, and I am absolutely determined to continue my apostolic mission for the salvation of souls.

In other times, de Mattei would have been proud to be at my side in the common battle for Catholic truth, for the defense of the immutable Magisterium and of the venerable Traditional Liturgy against the assaults of the Modernists. He would have probably also been at my side in denouncing the pandemic fraud and the intrinsic immorality of experimental vaccines produced with fetal material derived from abortions.

His recent interventions – published with his own name or under a pseudonym – have demonstrated, not without heartfelt sorrow, that if there is a “double” it must be sought in the recent writings of the Professor; writings that seem to be composed by a dull regime official who is obedient to the mainstream narrative, and not by the sharp mind and genuine faith of the de Mattei I once knew. Quantum mutatus ab illo.

[Comment Guidelines - Click to view]
The Remnant values the comments and input of our visitors. It’s no secret, however, that trolls exist, and trolls can do a lot of damage to a brand. Therefore, our comments are heavily monitored 24/7 by Remnant moderators around the country.  They have been instructed to remove demeaning, hostile, needlessly combative, racist, Christophobic comments, and streams not related to the storyline. Multiple comments from one person under a story are also discouraged. Capitalized sentences or comments will be removed (Internet shouting).
The Remnant comments sections are not designed for frequent personal blogging, on-going debates or theological or other disputes between commenters. Please understand that we pay our writers to defend The Remnant’s editorial positions. We thus acknowledge no moral obligation whatsoever to allow anyone and everyone to try to undermine our editorial policy and create a general nuisance on our website.  Therefore, Remnant moderators reserve the right to edit or remove comments, and comments do not necessarily represent the views of The Remnant.