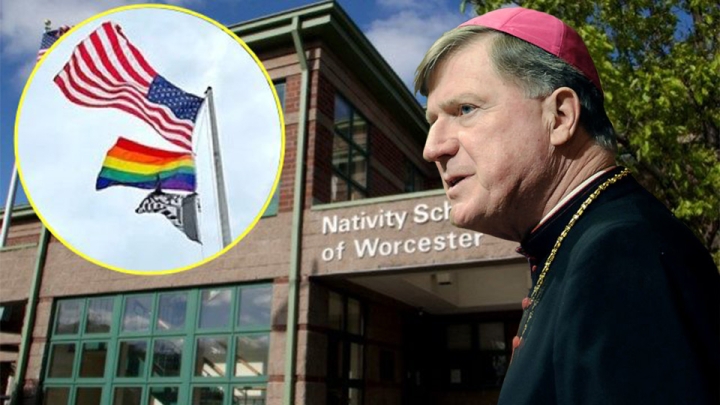 WORCESTER, Massachusetts (LifeSiteNews) – The Catholic bishop of the Diocese of Worcester has removed the “Catholic” status from a Jesuit-run school after it refused to heed his orders not to fly the LGBT rainbow flag and the Black Lives Matter flag.

In a decree issued June 16, Bishop Robert J. McManus rebuked the Jesuit-run Nativity School in Worcester, Massachusetts, for ignoring his previous directives about the flying of the “pride” and Black Lives Matter (BLM) flags.

“Despite my insistence that the school administration remove these flags because of the confusion and the properly theological scandal that they do and can promote, they refuse to do so. This leaves me no other option but to take canonical action,” he wrote.

The school, established in 2007, is for boys in Grades 5–8 and describes itself as “Roman Catholic/Jesuit.” It had been flying the two flags since January 2021 – at the desire of the students, according to the school – and replaced the flags after an unknown individual tore them down in March this year.

Bishop McManus had originally written in April 2022, ordering the school to remove the rainbow and BLM flags under the threat of losing its Catholic identity. “I must teach that it is imperative that a Catholic School use imagery and symbols which are reflective of that school’s values and principles so as to be clear with young people who are being spiritually and morally formed for the future,” he wrote.

He reiterated this warning one month later when he wrote an open letter warning that the LGBT and BLM flags “embody specific agendas or ideologies contradict Catholic social and moral teaching.”

The “‘Gay Pride’ flag represents support of gay marriage and actively living a LGBTQ+ lifestyle,” wrote McManus, while the BLM movement “directly contradicts Catholic social teaching on the importance and role of the nuclear family and seeks to disrupt the family structure in clear opposition to the teachings of the Catholic Church.”

[Comment Guidelines - Click to view]
The Remnant values the comments and input of our visitors. It’s no secret, however, that trolls exist, and trolls can do a lot of damage to a brand. Therefore, our comments are heavily monitored 24/7 by Remnant moderators around the country.  They have been instructed to remove demeaning, hostile, needlessly combative, racist, Christophobic comments, and streams not related to the storyline. Multiple comments from one person under a story are also discouraged. Capitalized sentences or comments will be removed (Internet shouting).
The Remnant comments sections are not designed for frequent personal blogging, on-going debates or theological or other disputes between commenters. Please understand that we pay our writers to defend The Remnant’s editorial positions. We thus acknowledge no moral obligation whatsoever to allow anyone and everyone to try to undermine our editorial policy and create a general nuisance on our website.  Therefore, Remnant moderators reserve the right to edit or remove comments, and comments do not necessarily represent the views of The Remnant.