Not to be outdone, The New York Times, not normally noted for its favorable reporting of Catholics and/or The Holy See, chimed in: "Pope Francis encouraged the talks with letters to Mr. Obama and Mr. Castro and had the Vatican host a meeting in October to finalize the terms of the deal. Mr. Obama spoke with Mr. Castro by telephone on Tuesday to seal the agreement in a call that lasted more than 45 minutes, the first direct substantive contact between the leaders of the two countries in more than 50 years."

Archbishop Thomas Wenski of Miami, home of many Cuban-Americans, added his assessment: “Pope Francis did what popes are supposed to do: build bridges and promote peace. He acted much like his namesake, Francis of Assisi.” The Archbishop was not alone: the reporting in the U.S. Edition of the British newspaper, The Guardian, was effusive in its praise of the pontiff: "The re-opening of diplomatic relations between the US and Cuba is the biggest success for the Vatican’s ultra-discreet diplomacy for at least 30 years. As the leaders of both countries acknowledged in their statements, Pope Francis and his envoys had played key roles in healing the breach. The only comparable success for papal mediation was in 1984 when Vatican diplomats helped to end a border dispute between Chile and Argentina over the possession of three strategically located islands in the Beagle Channel at the southern tip of South America."

Although Pope John Paul II's Vatican diplomats were central to the resolution of the Beagle Channel dispute between Chile and Argentina, the situation regarding Cuba is not remotely comparable in that only one involved possible military operations. Still, the Vatican's presence as the third actor between Chile and Argentina had pronounced regional and international dimensions, including sensitive dealings with Great Britain, whereas no such claim can be made regarding Cuba. The rule of the Argentine junta, or military government, during this crisis with Chile was to leave a deep impression on the Argentine Jesuit priest then known as Padre Jorge Bergoglio. A recent biography of Pope Francis by Austen Ivereigh, (The Great Reformer, Francis and the Making of a Radical Pope) an English Catholic journalist and former Deputy Editor of The Tablet, also makes that claim.

Is the high praise afforded the pontiff and the Vatican's diplomatic service in the issue of normalization of US-Cuban relations warranted? Justifiable? Can it be demonstrated that by helping to broker a deal to normalize relations with the island 90 miles off our southern shore that posed no military threat, the Vatican achieved, "...the biggest success for the Vatican's ultra-discreet diplomacy for at least 30 years?" I am not so sure, but, then, my doubts are not based on what I have heard or read, but what I have personally seen. And therein lies a tale.

Vincent Chiarello stands outside Havana's gated off and run-down Cathedral 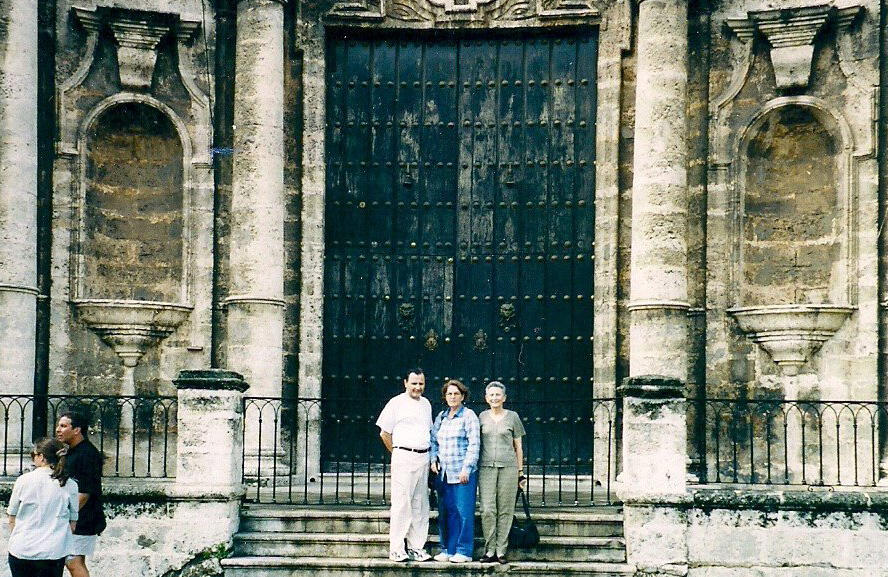 In March, 2002, my wife and I visited our son, then assigned to the U.S. Interest Section in Havana. (Since no formal diplomatic ties existed, there was no U.S. Embassy; the Swiss Embassy acted on behalf of the interests of the U.S. Government.) Because of the family connection, obtaining the necessary Cuban government's and US permission to visit Cuba was pro forma; that is not always the case, especially when the Cuban government rejected visa applications of U.S. citizens either known or suspected to be anti-Castro. For more than two weeks, I had an opportunity to gauge for myself what Cuba was really like, even if we were shadowed at each and every turn, beginning with our arrival in Havana's airport. Cuban security forces knew their job well: most of them had been trained by the East German Stasi secret police.

It was generally known by foreign diplomats assigned to Cuba that their homes and apartments were bugged; hence, no important conversations were held inside. Further, it was also known that no maid or gardener was permitted to work for foreigners unless he or she was an informer; again, no serious conversations were held around them either. In short, Cuba was a "police state" that was every bit as intrusive as Stalin's Soviet Union.

Cuba was the last of Spain's major possessions in the Western Hemisphere to become independent after the Spanish-American War of 1898, and well into the middle of the 20th century the island was reasonably self-sufficient in that little was imported, while Cuban sugar, cigars and rum were exported worldwide. The island, almost the size of Pennsylvania, enjoyed one of the highest standards of living in Latin America. That self-sufficiency was nowhere to be seen walking the streets of Havana a dozen years ago; what was noticeable was the endemic poverty, and the façades of apartment buildings, unfit and unsafe for human habitation, propped up with huge wooden beams to prevent their collapse. Equally disturbing and sordid were the very young women - girls, really - who approached you at every street corner. Open prostitution was alive and well in Cuba.

There are no private restaurants in Cuba, although private homes can be used to serve small numbers, but with a limited menu that cannot include shellfish or beef, both monopolies of the State and its government-owned places to dine. And what about those Cuban cigars? Or rum? They, too, are state monopolies. What may also draw a visitor's attention are the beautifully designed interiors of stores and even pharmacies, and the row after row of empty shelves. It is known that one brings his own medicine if admitted into a hospital in Cuba.

But what of the Cuban Catholic Church? Like much of Latin America, Cuba at one time had a robust and thriving church, estimated at 85% of the population, but with the coming of the Marxists, the government's open hostility toward the Church eventually seeped into the mindset of the population. Further, Church attendance lessened or eliminated one's chances of obtaining a government work permit, and the consequences of that policy were predictable. It should be pointed out that all during this period of suppression of the Church, the Vatican had assigned a Nuncio, or Papal Representative, to Cuba, and the Cuban government sent a delegation to The Holy See.

In 2002, I visited several (empty) churches in Havana, but one is memorable. Although I cannot recall the name of the church, what struck me as I entered was that it looked a little less shabby than most other buildings; in fact, one might have concluded that some attention had been paid to spruce up the interior. We were met by two guides - a young man and woman - who then proceeded to inform us that Cuba was relaxing some of its religious restrictions, and that the Castro government sought to demonstrate that change by showing an interest in church redecoration. Of course, that explanation was phony and used, as were the Potemkin villages, to convince gullible foreigners that some measure of freedom, of religious worship in this case, existed in this Marxist state. A dozen years later, it still does not, which brings me back to the pope's serving as an intermediary in normalizing relations between the U.S. and a government that is antithetical to the very idea of unfettered religious expression.

The normalization of relations will mean that the U.S. will, at some future date, establish an embassy in Havana, banking and commercial restrictions will be lifted, including the acceptance of credit cards, and travel between the two countries will be made easier. Oddly enough, the 1982 U.S. State Department finding that identified Cuba as "sponsoring State terrorism," will be "discussed at some time in the future." (Emphasis mine.) But what of the Cuban government's ending its policy of religious oppression? To that charge there is only the sound of silence.

One need not read the entrails of animals to know that the Cuban economy, despite huge investments by Canadian, Spanish, French and Italian firms, remains, as it has for half a century, in dire straits. To argue that the American embargo is solely responsible for Cuba's poverty, as the pope - then Archbishop of Buenos Aires - wrote as early as 1998, and apparently continues to believe today, is woefully misguided, for many other countries filled that void.

Then there is the fact that Cuba's former financial backers - Russia, and then Venezuela - have themselves suffered economic collapse, which made subsidizing Cuba far too expensive, but there is no question that there have been financial supporters of the Castro regime; still, the poverty continues. No one can predict the outcome of these normalization talks, but it is beyond cavil that the proposed changes will strengthen the Cuban government's hold not only on its people, but on the Church, too. Cuba's track record on the matter of Church/State relations does not mislead, and anyone who believes that a miraculous change will now come about in the Cuban government's dealing with the Catholic Church is delusional.

In his effort to "shake up" the Curia, to question established Church doctrine and dogma, and to bring about a new cultural environment within the Vatican, Pope Francis I has made decisions that will set the Church on a different course, a direction that may - probably will - disappoint and vex the Conservatives and Traditionalists within the Church. However, using his influence in support of a police state, albeit with the express purpose of helping the Cuban people, will not end well - for the Church, or for the people he wishes to assist. Is it not inconsistent for the pontiff, based on his experiences during the reign of the Argentine military, to believe that the policies of a now stronger Cuban military state will change favorably towards religious groups with this agreement? That mindset was characteristic of those who saw, "no enemies on the Left," and then learned of the horrors of Stalin.

There is a striking difference between Pope John Paul II's earlier diplomatic efforts, and the current one of Pope Francis: the former helped bring down the religious oppression of the Communist regimes; the latter will only strengthen it. That, by any measure, is not a papal achievement.

Published in Remnant Articles
back to top
Last modified on Monday, December 29, 2014
Tweet

Born on the Day of St. Patrick in 1937 in Brooklyn, N.Y., he was a high school history teacher until 1970, when he entered the U.S. Foreign Service. His overseas assignments included U.S. embassies in Colombia, Guatemala, Spain, Norway and Italy; his last assignment was to the U.S. Embassy to The Holy See. He is married to Cynthia (nee Goldsmith) and has three children. They attend a Traditional Latin Mass in Northern Virginia.

More in this category: « A Christmas Eve in Vietnam, Watching The Remnant's Man of the Year »