For the Synod on the Family: Please Pray with The Remnant Every Day from Now through October 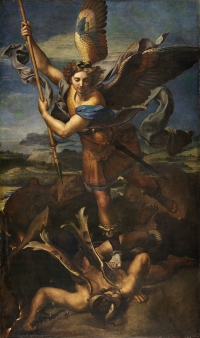 Join the worldwide remnant in prayer every day at 3:00 (Central Time), for the triumph of truth and the courageous princes of the Church over evil modernists who will do all in their power to thwart the Church’s infallible teachings on marriage and the family.

Specifically, for the defeat of the Kasper Proposal, let us pray…

The Traditional Prayer to St. Michael the Archangel

O Most Glorious Prince of the Heavenly Armies, St. Michael the Archangel, defend us in the battle and in our wrestling against principalities and powers, against the rulers of the world of this darkness, against the spirits of wickedness in the high places (Eph 6:12). Come to the aid of men, whom GOD created incorruptible, and to the Image of His own Likeness He made him (Wis 2:23); and from the tyranny of the devil He bought him at a great price (Cor 7:23).


Fight the battles of the Lord today with the Army of the Blessed Angels, as once thou did fight against Lucifer, the leader of pride, and his apostate angels; and they prevailed not: neither was their place found anymore in Heaven. But that great dragon was cast out, the old serpent, who is called the Devil and Satan, who seduces the whole world. And he was cast unto the earth, and his angels were thrown down with him (Rv 12:8-9).

Behold, the ancient enemy and murderer strongly raises his head! Transformed into an angel of light, with the entire horde of wicked spirits he goes about everywhere and takes possession of the earth, so that therein he may blot out the Name of GOD and of His Christ; and steal away, afflict, and ruin into everlasting destruction, the souls destined for a Crown of Eternal Glory. On men depraved in mind and corrupt in heart the wicked dragon pours out, like a most foul river, the poison of his villany; a spirit of lying, impiety and blasphemy; and the deadly breath of lust, and of all iniquities and vices. Her most crafty enemies have engulfed the Church, the Spouse of the Immaculate Lamb, with sorrows, they have drenched her with wormwood; on all her desirable things they have laid their wicked hands.

Where the See of the Blessed Peter and the Chair of Truth have been set up for the light of the world, there they have placed the throne of the abomination of their wickedness, so that, the Pastor having been struck, they may also be able to scatter the flock. Therefore, O thou unconquerable Leader, be present with the people of GOD and against the spiritual wickedness which are bursting in upon them; and bring them the victory.

The Holy Church venerates thee as its Guardian and Patron; and it glories in the fact that thou art its Defender against the wicked powers of earth and Hell. To thee the Lord has assigned the souls of the redeemed, to be placed in Heavenly bliss. Beseech the GOD of Peace to crush Satan under our feet, that he may no more be able to hold men captive and to harm the Church. Offer our prayers in the sight of the Most High, so that the mercies of the Lord may quickly come to our aid, that thou may seize the dragon, the ancient serpent, who is the Devil and Satan and that having bound him, thou may cast him into the bottomless pit, so that he may no more seduce the nations (Rv 20:3).

L. Behold the Cross of the Lord, flee away ye hostile forces.
R. The lion of the tribe of Juda, the root of David, hath conquered.

O GOD and Father of Our Lord Jesus Christ, we invoke Thy Holy Name, and we humbly implore Thy mercy, that by the intercession of the Mother of GOD, Mary, Immaculate Ever Virgin, of Blessed Michael the Archangel, of Blessed Joseph the Spouse of the same Blessed Virgin, of the Blessed Apostles Peter and Paul and of all the Saints, Thou wouldst deign to afford us help against Satan and all the other unclean spirits, and against whatever wanders throughout the world, to do harm to the human race and to ruin souls, through the same Christ Our Lord. Amen.

[Comment Guidelines - Click to view]
The Remnant values the comments and input of our visitors. It’s no secret, however, that trolls exist, and trolls can do a lot of damage to a brand. Therefore, our comments are heavily monitored 24/7 by Remnant moderators around the country.  They have been instructed to remove demeaning, hostile, needlessly combative, racist, Christophobic comments, and streams not related to the storyline. Multiple comments from one person under a story are also discouraged. Capitalized sentences or comments will be removed (Internet shouting).
The Remnant comments sections are not designed for frequent personal blogging, on-going debates or theological or other disputes between commenters. Please understand that we pay our writers to defend The Remnant’s editorial positions. We thus acknowledge no moral obligation whatsoever to allow anyone and everyone to try to undermine our editorial policy and create a general nuisance on our website.  Therefore, Remnant moderators reserve the right to edit or remove comments, and comments do not necessarily represent the views of The Remnant.
back to top
Last modified on Friday, September 11, 2015
Tweet

More in this category: « Cardinals Against Cardinals - Our Lady of Akita and Francis the First The Rosary at Ground Zero: 9/11 Remembered »