Written by  Christopher A. Ferrara
Rate this item
(55 votes) 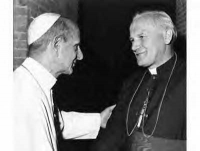 "[T]he faithful would conclude that ‘the Pope has changed the Rosary, and the psychological effect would be disastrous. Any change in it cannot but lessen the confidence of the simple and the poor."…Pope Paul VI

Editor’s Note: This article was first published in The Remnant in 2010. Since Pope Francis has now pulled back the curtain to further expose the radical coup d’état that has been underway in the Church for a long time, however, I feel certain that thinking Catholics are more disposed than ever to acknowledge the “progressive” innovations of the past half century as self-inflicted assaults on the Bride of Christ.  The attack on the Mass has been well documented in these pages, but the “reform” of the Rosary was no less revolutionary in its audacity. Codified by St. Pius V at the Council of Trent, the Rosary’s traditional form, given to us by Our Lady herself through St. Dominic, is what it is for reasons that far outweigh any human aspirations to add elements to it, no matter how pious those elements may be.

Pope John Paul was old and sick when they finally wore him down to the point where he dared change the Rosary, and even then he only permitted the change as an option that Catholics are free to take or leave. (I sometimes wonder how many other stunts Walter Kasper and his ilk pulled off in the name of Pope John Paul in those years.) In any case, out of fidelity to Our Lady, Catholics the world over really must reconsider the Luminous Mysteries. Why? Read on…. MJM

In the May 15th issue of The Remnant I noticed an advertisement placed by the Canons Regular of Saint John Cantius promoting “The Traditional Rosary” and recommending that one pray “the Psaltery of Our Lady—150 Hail Mary’s.” The reference to the Psaltery is telling, for the traditional Rosary is modeled on the ancient Psalter of 150 Psalms: 150 songs to Mary; fifty Aves for each of the triad of mysteries—the Joyful, the Sorrowful, the Glorious; a triune prayer addressed to the Mother of God.

The reference to the Psaltery is telling for another reason: It is indirectly an unfavorable comment on the “new” Rosary of John Paul II, which added five “luminous” mysteries, and thus 50 more Aves, to the traditional Rosary. That makes a total of 200 Aves, which would destroy the Rosary’s ancient correspondence to the 150 Psalms of the Psalter; the Rosary would no longer be “the Psaltery of Our Lady.” Then, of course, the “new” Rosary would no be longer triune, but rather would have four parts involving 50 Aves each: Joyful, Sorrowful, Glorious, and “Luminous.”

That the “new” Rosary was an improvident innovation is demonstrated by the approval it received from the New York Times, that relentless foe of traditional Roman Catholicism: “Time and again,” wrote Frank Bruni, “Pope John Paul II has boldly gone where other popes had not: a synagogue, a ski slope, distant countries with tiny populations. On Wednesday, he will apparently cross another frontier, making a significant change in the Rosary, a signature method of Catholic prayer for centuries now.” The article quotes a “senior Vatican official” to the effect that this change in the Rosary was in keeping with “his [the Pope’s] creativity and his courage.” (“Pope is Adding New Mysteries to the Rosary,” Frank Bruni, The New York Times, October 14, 2002)

Ecclesiastical tradition precludes “creativity,” since the very notion of tradition—traditio— involves handing down what one has already received. Nor was it “courageous” for the Pope to change the Rosary, since courage is “the state or quality of mind or spirit that enables one to face danger, fear, or vicissitudes with self-possession, confidence, and resolution; bravery.”  John Paul II was not facing any danger, fear or vicissitude that required him to change the Rosary. On the other hand, if the danger or fear arises from the change itself, precisely because the Rosary has been “a signature method of Catholic prayer for centuries,” then are we not dealing with an act that is reckless rather than courageous?

The neo-Catholic connoisseurs of novelty, who swallowed even John Paul II’s altar girls without protest and insisted that the Latin Mass was “banned” for forty years, will object that this is just another example of traditionalist nitpicking: “150 Hail Mary’s or 200 Hail Mary’s, three parts or four parts—what’s the difference?” I will let someone who knew something about the Rosary answer that objection for me.  He wrote:

The Rosary of the Blessed Virgin Mary, according to the tradition accepted by… St. Pius V and authoritatively taught by him, consists of various elements disposed in an organic fashion:

… a series of mysteries of salvation, wisely distributed into three cycles. These mysteries express the joy of the messianic times, the salvific suffering of Christ and the glory of the Risen Lord which fills the Church….

… The continued series of Hail Marys is the special characteristic of the Rosary, and their number, in the full and typical number of one hundred and fifty, presents a certain analogy with the Psalter and is an element that goes back to the very origin of the exercise of piety.

But this number, divided, according to a well-tried custom, into decades attached to the individual mysteries, is distributed in the three cycles already mentioned, thus giving rise to the Rosary of fifty Hail Marys as we know it.

This latter has entered into use as the normal measure of the pious exercise and as such has been adopted by popular piety and approved by papal authority, which also enriched it with numerous indulgences.

No doubt my quotation of this source will elicit the further neo-Catholic objection that, once again, traditionalists are presenting commentary that demonstrates they consider themselves “more Catholic than the Pope.” There is a problem, however:  the commentator just quoted is a Pope.  What is more, the Pope is none other than Paul VI, writing in Marialis Cultus (1974)—a scant 28 years before John Paul proposed his “new” Rosary in place of the traditional one.

If you're not a Remnant subscriber, you're missing all sorts of important articles like this one.


Traditionalists certainly agree with Paul VI that the traditional Rosary is “wisely distributed into three cycles,” that it bears an “analogy with the Psalter,” “an element that goes back to the very origin of the exercise of piety,” and that these traditional elements of the Rosary—which would be negated by the introduction of a four-part Rosary involving 200 Hail Marys—were “according to the tradition accepted by… St. Pius V and authoritatively taught by him.”

And, indeed, we traditionalists also agree with Pope Paul’s further observation in Marialis Cultus that “the division of the mysteries of the Rosary into three parts not only adheres strictly to the chronological order of the facts but above all reflects the plan of the original proclamation of the Faith and sets forth once more the mystery of Christ in the very way in which it is seen by Saint Paul in the celebrated “hymn” of the Letter to the Philippians — kenosis, death and exaltation….”

Two years before he promulgated Marialis Cultus, Paul VI rejected Annibale Bugnini’s infamous proposal to “reform” the Rosary so that the Our Father would be recited only once at the beginning, the Hail Mary edited to include only “the biblical portion of the prayer,” and the “Holy Mary, Mother of God” said “only at the end of each tenth Hail Mary.”

Pope Paul responded to this ridiculous idea through the Vatican Secretary of State: “[T]he faithful would conclude that ‘the Pope has changed the Rosary,’ and the psychological effect would be disastrous….  Any change in it cannot but lessen the confidence of the simple and the poor.” In the same year Marialis Cultus was issued, Bugnini was sacked and sent off to Iran, after Paul VI read a dossier documenting Bugnini’s Masonic affiliation—a dossier whose existence Bugnini himself admitted in his autobiography.

It is for the very reasons Paul VI cited that John Paul II had no right to replace the traditional Rosary with his innovation, which no one had asked for in the first place.  And it is for those same reasons that John Paul did not do so, but rather made it clear in RVM that his “new” mysteries of the Rosary were only “a proposed addition to the traditional pattern” to be “left to the freedom of individuals and communities.” In other words, the “new” Rosary is yet another postconciliar option the connoisseurs of novelty will, with dreary predictably, treat as de facto mandatory.

Yet, nearly eight years later, very few Catholics could name the “luminous” mysteries—or, for that matter, the traditional ones. For most Catholics, the luminous mysteries are nebulous mysteries. We ought to leave it that way. The less said about them, the better.  Let them fade from memory, just as the Bugnini Mass will fade from memory in God’s good time.

The traditional Rosary, however, will endure, just as the traditional Mass will endure, no matter how few Catholics remain devoted to it at present. Like all the other novelties that have tried to take root in the thin and arid topsoil of the “renewal of Vatican II,” the “new” Rosary will be swept away by the winds of change—the winds that come from the same eternal Source that will have the Church restored, despite the plans of those who think the “renewal” still has a future.

[Comment Guidelines - Click to view]
The Remnant values the comments and input of our visitors. It’s no secret, however, that trolls exist, and trolls can do a lot of damage to a brand. Therefore, our comments are heavily monitored 24/7 by Remnant moderators around the country.  They have been instructed to remove demeaning, hostile, needlessly combative, racist, Christophobic comments, and streams not related to the storyline. Multiple comments from one person under a story are also discouraged. Capitalized sentences or comments will be removed (Internet shouting).
The Remnant comments sections are not designed for frequent personal blogging, on-going debates or theological or other disputes between commenters. Please understand that we pay our writers to defend The Remnant’s editorial positions. We thus acknowledge no moral obligation whatsoever to allow anyone and everyone to try to undermine our editorial policy and create a general nuisance on our website.  Therefore, Remnant moderators reserve the right to edit or remove comments, and comments do not necessarily represent the views of The Remnant.
back to top
Last modified on Wednesday, February 10, 2016
Tweet

More in this category: « Apollyon Unleashed: Hell’s Attack on the Kitchen Table “It’s very entertaining to be Pope!” On the Apotheosis of Jorge Mario Bergoglio »