Pope Francis, the Apostolic Exhortation and the Age of Individual Conscience Featured

Written by  Christopher A. Ferrara
Rate this item
(73 votes) 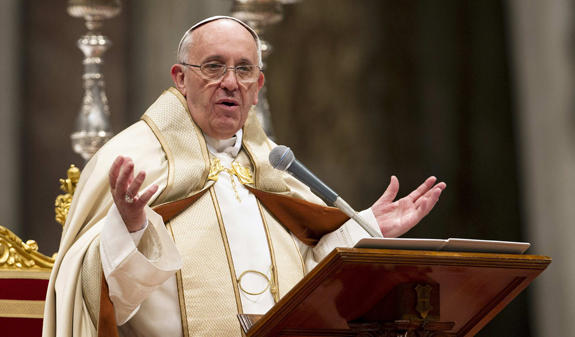 Our Lord says "whoever puts away his wife and marries another commits adultery (Lk 16:18)."

But in Chapter 8 of “The Joy of Love” Francis says: Well, really, it depends on the circumstances.

In keeping with Our Lord’s divine admonition, the Church has constantly affirmed her “practice, which is based upon Sacred Scripture, of not admitting to Eucharistic Communion divorced persons who have remarried” unless, if they "cannot satisfy the obligation to separate, they take on themselves the duty to live in complete continence, that is, by abstinence from the acts proper to married couples.” (Familiaris consortio, 84)

But in Chapter 8 of “The Joy of Love,’ Francis says: That’s a bit much, isn’t? How can people live without “intimacy”?

But in Chapter 8  of “The Joy of Love,’ Francis says: Not really.  Often it’s just too heavy for people, so we have to make allowances for those who cannot follow the "general rule."

Saint Paul teaches infallibly the revealed truth that “God is faithful, who will not suffer you to be tempted above that which you are able: but will make also with temptation issue, that you may be able to bear it.” (1 Cor. 10:13)

But in Chapter 8 of “The Joy of Love” Francis says: Well, people just can’t help themselves, even if they know they’re sinning.  So we have to accept the "most generous response" they can offer at a given point in their “spiritual growth."

Chapter Eight of this ridiculous document, which overall is a haphazard jumble of the good, the bad and the merely incomprehensible (“time is greater than space”?), attempts to institutionalize situation ethics as “pastoral mercy.”  This is a mockery of the Magisterium and should be treated as such: with mockery, derision and calls for rejection by the entire Church.

Drudge Report declares that Francis has launched “The Age of Individual Conscience.”  Any Catholic commentator who, having read the document, dismisses this claim as “media spin” is engaging in deception.  That is precisely what Francis is attempting to do, if it were possible.

For Chris Ferrara's extensive commentary on the Exhortation, please see the next print-edition of The Remnant.

[Comment Guidelines - Click to view]
The Remnant values the comments and input of our visitors. It’s no secret, however, that trolls exist, and trolls can do a lot of damage to a brand. Therefore, our comments are heavily monitored 24/7 by Remnant moderators around the country.  They have been instructed to remove demeaning, hostile, needlessly combative, racist, Christophobic comments, and streams not related to the storyline. Multiple comments from one person under a story are also discouraged. Capitalized sentences or comments will be removed (Internet shouting).
The Remnant comments sections are not designed for frequent personal blogging, on-going debates or theological or other disputes between commenters. Please understand that we pay our writers to defend The Remnant’s editorial positions. We thus acknowledge no moral obligation whatsoever to allow anyone and everyone to try to undermine our editorial policy and create a general nuisance on our website.  Therefore, Remnant moderators reserve the right to edit or remove comments, and comments do not necessarily represent the views of The Remnant.
back to top
Last modified on Friday, April 8, 2016
Tweet

More in this category: « Archbishop Lefebvre Was Wrong All Along! Right? The Apostolic Exhortation and the Abolishment of the Sin of Presumption »