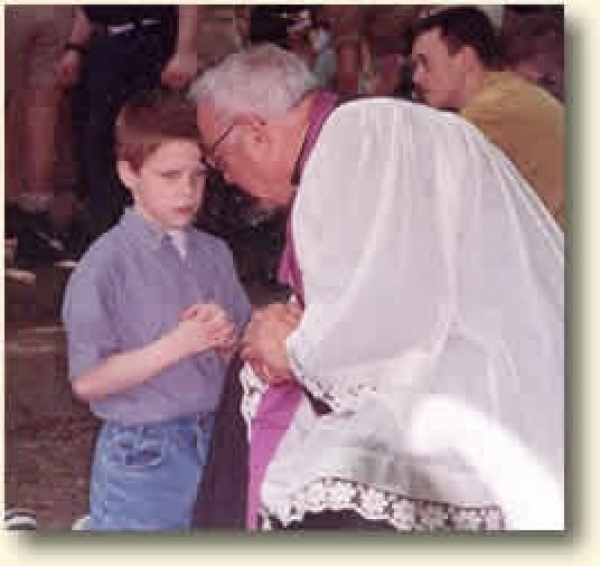 Fr.Marchosky hears a French boy's confession on the Remnant's pilgrimage to Chartres, 1998

Many thanks to an old friend of The Remnant who this afternoon reminded me that today is the birthday of the late, great Father H. Marchosky. My correspondent writes, "It's peculiar, reflecting on these stalwart people from the past, how in my 60's, I often feel like an orphan. May God bless and keep these warriors; these saints.  And may He have mercy on us."

I couldn't agree more. I miss them, and, as predicted when they left us, no one has truly filled the shoes of these valiant pioneers of the Catholic counterrevolution. "Smells and bells" traddies, they were not! And they were traditionalist long before it was "cool".  Many of them lost everything (apart from the faith) in defense of Tradition, and Father Marchosky was no exception. He traded prestige and a life of luxury as a highly respected professor of theology for his refusal to offer the New Mass.

Father's story is included in the Angelus Press book, "Priest, Where Is Thy Mass? Mass, Where Is Thy Priest? Seventeen Independent Priests Tell Why They Celebrate the Latin Mass"

Please pray for our old friend, the man who introduced Michael Davies to the Remnant way back in 1971, never once offered the New Mass (though he managed to remain under his bishop throughout his priestly life), and for many of us was the one priestly link to the Church in eclipse, long before there was an Indult when, for all intents and purposes, the Old Mass was dead and buried. They never gave up hope and, inspired by their example, neither did we.

I wrote this when Father died, nine years ago this week:

At three o'clock this morning, December 11, within the Octave of the Feast of the Immaculate Conception, a great, Catholic priest died peacefully. Father Harry Marchosky had been ill for some time, and so had been in the good care of James and Patricia Haddock in Veneta, Oregon for the past five years. He died at home, just moments after having completed fifteen decades of the rosary with his friends. A priest for 55 years, he was 84.

The holy priest's last words on this earth were: "I love Our Lady so much.  I want to go home."

Longtime readers of The Remnant will surely recall the singular contribution to the cause of Tradition made by Father Marchosky.  A Thomistic philosopher as well as an accomplished linguist, this convert from Judaism (and one of the founders of Thomas Aquinas College in California) never once offered the New Mass and yet remained in good standing with his bishop to the very end. The office of the Archbishop of Quebec (Father's bishop) warmly acknowledged Father's passing by telephone on the morning of his death, in fact.

Father Marchosky was fiercely loyal to Tradition, which meant he was fiercely loyal to the Church and to his vow of obedience.  He carefully maintained what he called "loyal resistance" where his superiors were concerned, noting that they could order him to stop offering the Mass (and he would obey) but they could not force him to offer the New Mass. For over four decades, then, Father had been in a good position to offer example and advice to countless seminarians and young priests who learned to be loyal defenders of Tradition at the feet of Father Marchosky.  In the last ten years of his life, he helped out wherever he could at the St. Society of St. Pius X's center in Veneta where he was cared for with great charity and love.

Over his career, Fr. Marchosky had worked closely with men such as Dr. Eric de Savanthem, Dr. John Senior, Hamish Fraser, Walter Matt and, of course, Michael Davies. It was Father Marchosky, in fact, who "discovered" a very young Mr. Davies on a trip to London in 1970, and subsequently encouraged him to form an alliance with The Remnant, which is how American Catholics came to know the great Mr. Davies.

Father was a chaplain for the U.S. Chapter on the Pilgrimage to Chartres many times, he was part of the great “March on Rome” in 1972, and  met with Archbishop Lefebvre several times, including here in St. Paul when the Archbishop visited The Remnant in 1976.

The model of priestly virtue and commitment to his holy calling, Father Marchosky was responsible for many hundreds, perhaps thousands, of converts to traditional Catholicism.   He was there from the very beginning, and one of the first priests in the world to become known as a "traditional" Catholic.

At seven years old, the present Editor of The Remnant served his first traditional Mass—one offered by the late, great Father Marchosky.  It was an experience never to be forgotten because it was the first of many and served as unforgettable introduction to the “catacomb movement” that was traditional Catholicism in the early 1970s. Twenty-two years later, Fr. Marchosky would offer the Nuptial Mass when my wife and I were married.  Were it not for this most courageous, holy, funny, brilliant and erudite priest—master of six languages, gourmet cook, theologian, expert on the writings of St. John of the Cross and Cardinal Newman, seminary professor, philosopher (who had much of the Summa literally committed to memory) and fan of Maria Callas's music and, believe it or not, Jack Benny's early work—many of us would likely not be traditional Catholics today.

Much more will be written about the life of this heroic alter Christus who gave up everything--career, power, prestige, a comfortable living--for Tradition and for his convictions, but for now I would ask Catholics to remember this great champion of the Catholic cause in your prayers, and, if you're able,  have a Mass offered for the repose of his soul.  After all Father Marchosky did for the traditional Mass movement over the past forty years, both here in the States and in Europe, it is only fitting that as many Masses as possible should be offered for his soul as quickly as possible.

The Church has lost one of her most able defenders, and we have lost a friend who can never be replaced but who will always be remembered. Eternal rest grant unto him, O Lord, and let perpetual light shine upon him. May his soul and all the souls of the faithful departed rest in peace. Amen

Pray for us, Father. God bless you.

To read more about the history of The Remnant and other pioneers of the Catholic counterrevolution, check out our HISTORY SECTION

[Comment Guidelines - Click to view]
The Remnant values the comments and input of our visitors. It’s no secret, however, that trolls exist, and trolls can do a lot of damage to a brand. Therefore, our comments are heavily monitored 24/7 by Remnant moderators around the country.  They have been instructed to remove demeaning, hostile, needlessly combative, racist, Christophobic comments, and streams not related to the storyline. Multiple comments from one person under a story are also discouraged. Capitalized sentences or comments will be removed (Internet shouting).
The Remnant comments sections are not designed for frequent personal blogging, on-going debates or theological or other disputes between commenters. Please understand that we pay our writers to defend The Remnant’s editorial positions. We thus acknowledge no moral obligation whatsoever to allow anyone and everyone to try to undermine our editorial policy and create a general nuisance on our website.  Therefore, Remnant moderators reserve the right to edit or remove comments, and comments do not necessarily represent the views of The Remnant.
back to top
Last modified on Thursday, December 8, 2016
Tweet