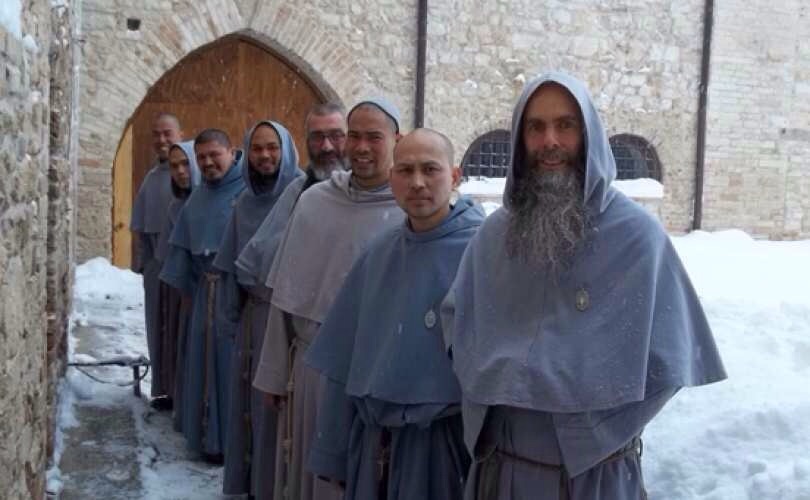 The universal Church is now entering a gravely critical moment in her history that shows alarming similarities with the great Arian crisis of the fourth century.

Editor's Note: Many thanks to our friend and ally in London, Dr. Joseph Shaw, for passing along this important letter of support for the Four Cardinals, signed by a collection of prestigious academics, philosophers, theologians and priests. Dr. Shaw writes:  "The initiative of the Four Cardinals in seeking clarification, in light of tradition, of the teaching of the Church on Communion for couples in irregular situations is of epochal significance. In this letter, a score of Catholic academics and pastors lend their support to this initiative, giving their reasons."  We ask our readers to please share this letter with friends, family, social media contacts, news agencies, and anyone in a position to help make it as widely known as possible. The situation in Rome is beyond critical.  MJM

Statement of Support for the Four Cardinals’ Dubia

As Catholic scholars and pastors of souls, we wish to express our profound gratitude and full support for the courageous initiative of four members of the College of Cardinals, Their Eminences Walter Brandmüller, Raymond Leo Burke, Carlo Caffarra and Joachim Meisner. As has been widely publicized, these cardinals have formally submitted five dubia to Pope Francis, asking him to clarify five fundamental points of Catholic doctrine and sacramental discipline, the treatment of which in Chapter 8 of the recent Apostolic Exhortation Amoris Laetitia (AL) appears to conflict with Scripture and/or Tradition and the teaching of previous papal documents – notably Pope St. John Paul II’s Encyclical Veritatis Splendor and his Apostolic Exhortation Familiaris Consortio. Pope Francis has so far declined to answer the four cardinals; but since they are in effect asking him whether the above weighty magisterial documents still require our full assent, we think that the Holy Father’s continued silence may open him to the charge of negligence in the exercise of the Petrine duty of confirming his brethren in the faith.

Several prominent prelates have been sharply critical of the four cardinals’ submission, but without shedding any light on their pertinent and searching questions. We have read attempts to interpret the apostolic exhortation within a ‘hermeneutic of continuity’ by Christoph Cardinal Schӧnborn and Professor Rocco Buttiglione; but we find that they fail to demonstrate their central claim that the novel elements found in AL do not endanger divine law, but merely envisage legitimate changes in pastoral practice and ecclesiastical discipline.

Indeed, a number of commentators, notably Professor Claudio Pierantoni in an extensive new historical-theological study, have argued that as a result of the widespread confusion and disunity following the promulgation of AL, the universal Church is now entering a gravely critical moment in her history that shows alarming similarities with the great Arian crisis of the fourth century. During that catastrophic conflict the great majority of bishops, including even the Successor of Peter, vacillated over the very divinity of Christ. Many did not fully lapse into heresy; however, disarmed by confusion or weakened by timidity, they sought convenient compromise formulae in the interests of “peace” and “unity”. Today we are witnessing a similar metastasizing crisis, this time over fundamental aspects of Christian living. Continued lip service is given to the indissolubility of marriage, the grave objective sinfulness of fornication, adultery and sodomy, the sanctity of the Holy Eucharist, and the terrible reality of mortal sin. But in practice, increasing numbers of highly placed prelates and theologians are undermining or effectively denying these dogmas – and indeed, the very existence of exceptionless negative prohibitions in the divine law governing sexual conduct – by virtue of their exaggerated or one-sided emphasis on “mercy”, “pastoral accompaniment”, and “mitigating circumstances”.

With the reigning Pontiff now sounding a very uncertain trumpet in this battle against the ‘principalities and powers’ of the Enemy, the barque of Peter is drifting perilously like a ship without a rudder, and indeed, shows symptoms of incipient disintegration. In such a situation, we believe that all Successors of the Apostles have a grave and pressing duty to speak out clearly and strongly in confirmation of the moral teachings clearly expounded in the magisterial teachings of previous popes and the Council of Trent. Several bishops and another cardinal have already said they find the five dubia opportune and appropriate. We ardently hope, and fervently pray, that many more of them will now endorse publicly not only the four cardinals’ respectful request that Peter’s Successor confirm his brethren in these five points of the faith “delivered once and for all to the saints” (Jude 3), but also Cardinal Burke’s recommendation that if the Holy Father fails to do so, the cardinals then collectivelyapproach himwith some form of fraternal correction, in the spirit of Paul’s admonition to his fellow apostle Peter at Antioch (cf. Gal. 2:11).

We entrust this grave problem to the care and heavenly intercession of Mary Immaculate, Mother of the Church and Vanquisher of all heresies.

December 8, 2016, Feast of the Immaculate Conception

Rev. John Osman MA, STL
Parish priest in the archdiocese of Birmingham,
former Catholic chaplain to the University of Cambridge

[Comment Guidelines - Click to view]
The Remnant values the comments and input of our visitors. It’s no secret, however, that trolls exist, and trolls can do a lot of damage to a brand. Therefore, our comments are heavily monitored 24/7 by Remnant moderators around the country.  They have been instructed to remove demeaning, hostile, needlessly combative, racist, Christophobic comments, and streams not related to the storyline. Multiple comments from one person under a story are also discouraged. Capitalized sentences or comments will be removed (Internet shouting).
The Remnant comments sections are not designed for frequent personal blogging, on-going debates or theological or other disputes between commenters. Please understand that we pay our writers to defend The Remnant’s editorial positions. We thus acknowledge no moral obligation whatsoever to allow anyone and everyone to try to undermine our editorial policy and create a general nuisance on our website.  Therefore, Remnant moderators reserve the right to edit or remove comments, and comments do not necessarily represent the views of The Remnant.
back to top
Last modified on Saturday, December 10, 2016
Tweet
More in this category: « Pulling Back the Veil: Orthodox Patriarch Defends Francis Special Report from Remnant TV: Cardinal Burke Speaks »