Is Putin Puttin’ Us On? 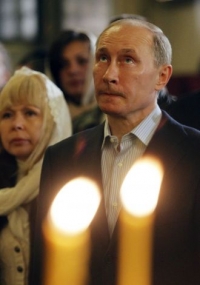 “We can see how many Euro-Atlantic countries are rejecting their roots, the Christian values that form the basis of Western civilization. They are reneging on moral principles and their traditional identity: national, cultural, religious and even sexual.”

Even if Putin is puttin’ us on, would that be all bad? What the world rather desperately needs just now is a reminder of how God-fearing leaders used to talk, not long before our 'global village' decided to embrace universal Christophobia and raise moral depravity to the level of virtue.

Even if Putin is using pro-God, pro-morality sentiment merely as a rhetorical tool to put distance between his country and her rivals, there’s obviously good reason for it. He would not be doing this if it did not facilitate the advancement of Russia’s political agenda, whatever that might include.

And it is in this incontrovertible fact that God-fearing Christians at home and abroad can perhaps allow themselves some modicum of hope in an otherwise hopeless world, because what it means is that Mother Russia sees millions growing tired of the global Dictatorship of Relativism, millions hungering for a return to sanity, millions fed up with our Godless new world order in the making. What it means is that Putin is responding to a fatigue factor (with the agenda of the globalists) that has political firepower behind it.

Savvy politicians are beginning to see that the wheels are coming off the worldwide secularist revolution, and you don’t have to be a Putin fan to celebrate that!

Faithful Catholics would be out of their minds not to welcome this development on its face, even if it should turn out to be part and parcel of cold and calculated Russian politics. Why? Because however flawed and imperfect it may seem to us, it portends something much worse for the enemies of Christ the King, that is, a significant disruption to their plans to bring about the universal de-Christianization of the world—an Orwellian project the UN, the US, and the EU have made Priority Number One.

God will not be mocked. “Gay marriage”, abortion, sexual brainwashing (and thus institutionalized abuse!) of millions of children in public schools—these evils have consequences, and no law or political party seems able to stop the forces responsible anymore. But Putin just might slow them down.

And, of course, Christian charity demands that we at least allow for the outside possibility that Vladimir Putin actually means what he is saying, and that he has had some sort of awakening. After all, the abject moral and spiritual depravity that now defines Europe and America is not without easily understood consequences—the very same that triggered the annihilation of entire empires in the past, in fact.

Just because Americans and Europeans are ignorant of history does not mean Putin is.  No country can prosper without God and a moral code; no country can survive without its foundational family as established by God’s law—and Putin is evidently cognizant of this fact. Sure, he may be a political opportunist, but even opportunists can have constructive reactions against moral and social anarchy.

Up close and personal, the hideous face of evil has a way of changing men’s hearts, and it may have changed Putin’s on some level. After all, what is the European Union if not evil right straight through!

In any case, nothing is impossible with God, and if Europe, America, and even the Church in her human element have broken covenant with Almighty God there is nothing to say that God will not work His will (or His chastisement) through those who, however flawed and schismatic, at least still acknowledge His existence and have the good sense to fear Him.

Vladimir Putin delivered a speech back in September before the Forum Valdai in Russia, an event that brings together leaders from around the world to speak on important issues impacting society. That speech is presently garnering high view counts on YouTube, and can be viewed here with French subtitles:

A partial English translation also appears below, provided by RU, the press service of the UNEC Network, www.radio-silence.tv

"... Another important challenge for the identity of Russia is linked to the events taking place in the world. This applies to foreign policy and moral values.

"We can see how many Euro-Atlantic countries are rejecting their roots, the Christian values that form the basis of Western civilization. They are reneging on moral principles and their traditional identity: national, cultural, religious and even sexual. They put in place policies that put on equal basis traditional families with LGBT families; faith in God is equal to faith in Satan. This excess of political correctness has led to people talking seriously of registering political parties whose aim is to promote pedophilia.

"In many European countries people are embarrassed to talk about their religion. The Christian feast holidays are abolished or called something different; their essence is hidden, as well as their moral foundation. And people are trying aggressively to export this model worldwide.

"I am convinced that this opens a direct path to degradation and primitivism, resulting in a profound demographic and moral crisis. What better evidence of this moral crisis than the loss of the ability to reproduce? Today almost all developed nations are no longer able to reproduce themselves, even with the help of immigration.

"Without the values in Christianity and other world religions, without moral standards that have formed over thousands of years, people will inevitably lose their human dignity. We consider it natural and right to defend these values. We must respect the right of every minority to be different, but the rights of the majority should not be questioned.  At the same time we see attempts to launch the standard of a one world government and blur the institutions of international law and the national sovereignty model. Such a one world, standardized government does not need sovereign states, it needs vassals. Historically this represents a rejection of our own identity and of the universal diversity given by God."

At least Putin isn’t Obama, and we can all thank God for that.

Published in Remnant Articles
back to top
Last modified on Saturday, March 15, 2014
Tweet