CARDINAL ZEN: Traditionis Custodes "no less severe because it was foreseen" 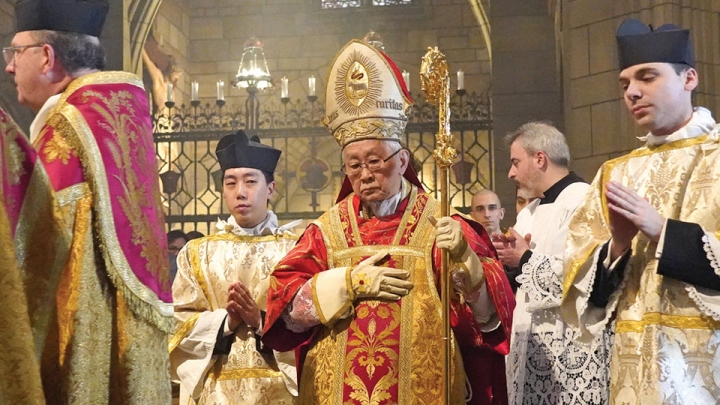 After issuing a warning on his personal blog on June 12, 2021, Cardinal Zen below reacts to the tone and spirit of Traditionis Custodes:

Why do they see a problem where there is none, and close their eyes to the problem for which they are also responsible?

Concerns about a possible document "against" the Tridentine Mass (see my blog June 12, 2021) have come true, and the blow has been no less severe because it was foreseen. Many tendentious generalizations in the documents hurt more than expected the hearts of many good people, who have never given the slightest cause to be suspected of not accepting the liturgical reform of the Council, much less of not accepting the Council tout court. Moreover, they remain active members in their parishes.
It came as a bitter surprise to me personally that the “widespread” consultation never reached me, a cardinal and former member of the Congregation for Divine Worship and the Discipline of the Sacraments. In addition, during 2007-2009, I was Bishop of Hong Kong and was therefore responsible for implementing Summorum Pontificum, and up to now, have been well known for supporting the group.

The problem is not “which rite do people prefer?” but “why don’t they go to Mass anymore?”.

Having had no knowledge either of the questionnaire or the responses to the questionnaire, I cannot judge it, but only suspect that there was considerable misunderstanding (or perhaps even manipulation) in the process.

From my reading of the documents, I note (1) an incredible ease (or tendentiousness) in linking the desire to use the vetus ritus to the non-acceptance of the ritus novus and (2) the association of a non-acceptance of the liturgical reform (which often concerns the way in which it was carried out with its many serious abuses) with a total and profound rejection of the Council itself (for the proponents of this rejection, the diversity of the rite of the Mass is only a small corollary, so much so that the concession regarding the rite did not reverse the schism).

The Vatican authorities should ask themselves (and perhaps even make a thorough investigation) why the second phenomenon has persisted, and perhaps (recently) worsened.

Isn’t the root of the evil the attitude of believing that everything can now be changed?

The problem is not “which rite do people prefer?” but “why don’t they go to Mass anymore?”. Certain surveys show that half of the Christian population in Europe no longer believes in the Real Presence of Jesus in the Eucharist, no longer believes in eternal life! Certainly, we do not blame the liturgical reform, but we just want to say that the problem is much deeper. We cannot evade the question: “Hasn’t formation in the faith perhaps been lacking?”; “Hasn’t the great work of the Council perhaps been wasted?” Isn’t the root of the evil the attitude of believing that everything can now be changed? Isn’t it perhaps the attitude of believing that the Second Vatican Council cancels out all previous councils, and that the Council of Trent is like dirt that has accumulated on the frescos of the Sistine Chapel (as a “liturgist” in our diocese put it)?

The document obviously sees not only disturbance and unrest in the execution of Summorum Pontificum but considers the very existence of a parallel rite to be an evil. Don’t paragraphs § 5 and § 6 of Art 3, Art 4 and 5 clearly hope for the death of these groups? But, even with that, can’t the anti-Ratzinger lords [signori] of the Vatican patiently wait for the Tridentine Mass to die along with the death of Benedict XVI, instead of humiliating the venerable Pope Emeritus in this way?

[Comment Guidelines - Click to view]
The Remnant values the comments and input of our visitors. It’s no secret, however, that trolls exist, and trolls can do a lot of damage to a brand. Therefore, our comments are heavily monitored 24/7 by Remnant moderators around the country.  They have been instructed to remove demeaning, hostile, needlessly combative, racist, Christophobic comments, and streams not related to the storyline. Multiple comments from one person under a story are also discouraged. Capitalized sentences or comments will be removed (Internet shouting).
The Remnant comments sections are not designed for frequent personal blogging, on-going debates or theological or other disputes between commenters. Please understand that we pay our writers to defend The Remnant’s editorial positions. We thus acknowledge no moral obligation whatsoever to allow anyone and everyone to try to undermine our editorial policy and create a general nuisance on our website.  Therefore, Remnant moderators reserve the right to edit or remove comments, and comments do not necessarily represent the views of The Remnant.
back to top
Last modified on Wednesday, July 21, 2021
Tweet
More in this category: « Carlo Maria Viganò: “To stand at the foot of the Cross, as we witness the Passion of the Church” – The Duty of Catholics today Dr. Kwasniewski on Traditionis Custodes: Worst Papal Document in History »