You Will Know a Tree by Its Fruits 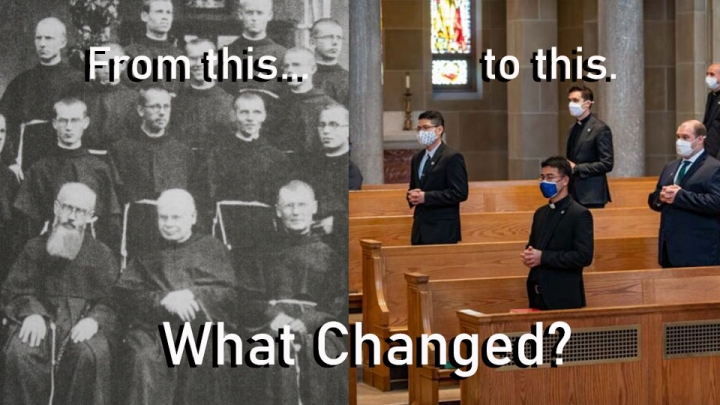 What the Parable of the Sower have to do with this? The sower sowing his seed can be compared to God planting His Divine Word among all the people of the world—and even more specifically—to those He calls to the Sacred Priesthood of Jesus Christ—the eternal High Priest. Accordingly, the Catholic seminary is the breeding ground, the plot where plants are raised from seeds. The seminary is where the future growth or decline of the Church Militant “on earth as it is in heaven” is raised in the formation and education of future Priests who will administer God’s grace through the Sacraments and by preaching His Divine Word. The world’s eternal salvation depends on the Sacred Priesthood.

From 1965 to 2021, the total number of U.S. seminarians (both religious and diocesan), including those in college and high school seminaries, dropped precipitously from 48,992 seminarians to 3,564.

From 1920 to 1965, the total number of seminarians in the U.S. grew from 8,944 to 48,992, a remarkable and astounding 448 percent increase in total seminarians in 50 years. Using the parable of the farmer sowing seeds, we can conclude that many of those seeds of Divine Grace were being planted upon and landed upon very good soil indeed!

You will know a tree by its fruits.

From 1965 to 2021, the total number of U.S. seminarians (both religious and diocesan), including those in college and high school seminaries, dropped precipitously from 48,992 seminarians to 3,564. During that same time period, the number of prospective candidates to the Sacred Priesthood of our Lord and Savior Jesus Christ plummeted 93 percent.

In other words, during the year of Our Lord 1965, the year the Second Vatican Council ended, the U.S. Catholic Church had the most seminarians in its entire history.

In other words, during the year of Our Lord 1965, the year the Second Vatican Council ended, the U.S. Catholic Church had the most seminarians in its entire history.

This decline followed in the footsteps upon the close of that Council, one of 21 Church Councils, in which Cardinal Ratzinger said the following:

The Second Vatican Council has not been treated as a part of the entire living
Tradition of the Church, but as an end of Tradition, a new start from zero.
The truth is that this particular Council defined no dogma at all, and deliberately
chose to remain on a modest level, as a merely pastoral council; and yet many treat
it as though it had made itself into a sort of superdogma which takes away the
importance of all the rest.

This idea is made stronger by things that are now happening. That which previously
was considered most holy — the form in which the liturgy was handed down —
suddenly appears as the most forbidden of all things, the one thing that can safely
be prohibited. It is intolerable to criticize decisions which have been taken
since the Council; on the other hand, if men make question of ancient rules, or
even of the great truths of the Faith — for instance, the corporal virginity of
Mary, the bodily resurrection of Jesus, the immortality of the soul, etc. —
nobody complains or only does so with the greatest moderation…

All this leads a great number of people to ask themselves if the Church of today
is really the same as that of yesterday, or if they have changed it for something
else without telling people. The one way in which Vatican II can be made plausible
is to present it as it is; one part of the unbroken, the unique Tradition of the
Church and of her faith.

Fifty-five years later, after this General Council of the universal Catholic Church, there were a mere 3,564 seminarians (diocesan and religious) for 195 U.S. dioceses.

Just 56 years later, the U.S. Church saw a prospective 448 ordinations from 195 U.S. dioceses (2.3 seminarians average per diocese) to the Sacred Priesthood in 2020 according to a USCCB study.

Another parable He put before them, saying, “The kingdom of heaven may be compared to a man who sowed good seed in his field;  but while men were sleeping, his enemy came and sowed weeds among the wheat, and went away.

The modernists choked off the seeds of the Church, its potential Priests, who as seminarians must navigate to find the good soil of authentic Catholic Priestly formation.

So when the plants came up and bore grain, then the weeds appeared also.  And the servants of the householder came and said to Him, ‘Sir, did you not sow good seed in your field? How then has it weeds?’ He said to them, ‘An enemy has done this.’ The servants said to him, ‘Then do you want us to go and gather them?

But He said, ‘No; lest in gathering the weeds you root up the wheat along with them.  Let both grow together until the harvest; and at harvest time I will tell the reapers, Gather the weeds first and bind them in bundles to be burned, but gather the wheat into my barn. [Matt 13: 24-30, RSV]

There were 13.7 times (1,370 percent) more seminarians in the U.S. Catholic Church in 1965 than in 2020—55 years following the close of a pastoral Council that defined no dogmas and chose to remain on a modest level, according to Joseph Cardinal Ratzinger.

The modernists choked off the seeds of the Church, its potential Priests, who as seminarians must navigate to find the good soil of authentic Catholic Priestly formation. Could it possibly be that there were some who planted weeds among the wheat—ambiguity in the midst of the rock solid doctrine of the Church of 1965 years? Could it be possible?

Pope Paul VI said, “We believed that after the Council would come a day of sunshine in the history of the Church. But instead there has come a day of clouds and storms, and of darkness...  And how did this come about?  We will confide to you the thought that may be, we ourselves admit in free discussion, that may be unfounded, and that is that there has been a power, an adversary power. Let us call him by his name: the devil. …  It is as if from some mysterious crack, no, it is not mysterious, from some crack the smoke of Satan has entered the Temple of God. (Pope Paul VI, Address on the Occasion of the Ninth Anniversary of His Election, June 29, 1972)

“And enemy has done this…..Let both grow together until the harvest; and at harvest time I will tell the reapers, ‘Gather the weeds first and bind them in bundles to be burned, but gather the wheat into my barn.’” [Matt 13:28-30, RSV]

You will know a tree by its fruits.

NOTE: Statistics and references compiled from the following sources:

Index of Leading Catholic Indicators: The Church Since Vatican II, published in 2003 by Kenneth C. Jones.

Center for Applied Research in the Apostolate, Georgetown University. https://cara.georgetown.edu/frequently-requested-church-statistics/

[Comment Guidelines - Click to view]
The Remnant values the comments and input of our visitors. It’s no secret, however, that trolls exist, and trolls can do a lot of damage to a brand. Therefore, our comments are heavily monitored 24/7 by Remnant moderators around the country.  They have been instructed to remove demeaning, hostile, needlessly combative, racist, Christophobic comments, and streams not related to the storyline. Multiple comments from one person under a story are also discouraged. Capitalized sentences or comments will be removed (Internet shouting).
The Remnant comments sections are not designed for frequent personal blogging, on-going debates or theological or other disputes between commenters. Please understand that we pay our writers to defend The Remnant’s editorial positions. We thus acknowledge no moral obligation whatsoever to allow anyone and everyone to try to undermine our editorial policy and create a general nuisance on our website.  Therefore, Remnant moderators reserve the right to edit or remove comments, and comments do not necessarily represent the views of The Remnant.
back to top
Last modified on Thursday, January 20, 2022
Tweet
More in this category: « It is Time to End the So-Called “Irreversible” Ecumenical Damage THEY HAVE NO WINE: A Word on the Modernist Catholic Church »