USA or USSA? (We Were Warned, Too Bad We Didn't Listen) 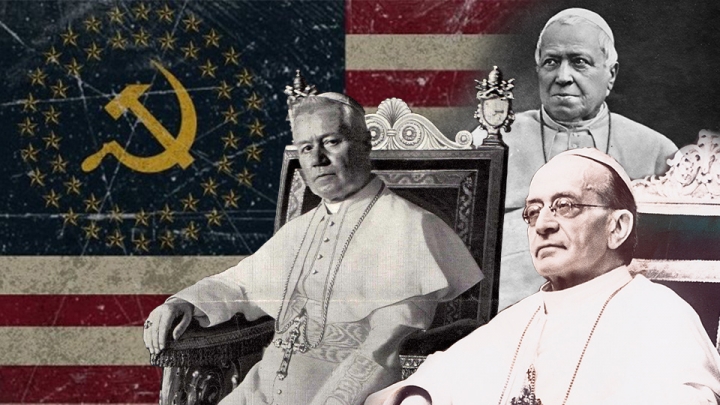 By definition, Socialism is a stage of society in Marxist theory transitional between capitalism and communism and distinguished by unequal distribution of goods and pay according to work done.  (Essentially Verbatim:  Merriam-Webster’s Collegiate Dictionary, Eleventh Edition, Definition sense number 3, page 1183)

Sadly, this day in history could have been avoided if we had only listened to what our traditional Roman Catholic pontiffs had been telling us for many years prior to the Second Vatican Council.  On March 19, 1937 Pope Pius XI, in writing about Atheistic Communism, said:

“It may be said in all truth that the Church, like Christ, goes through the centuries doing good to all. There would be today neither Socialism nor Communism if the rulers of the nations had not scorned the teachings and maternal warnings of the Church.”  (Divini Redemptoris, paragraph 38)

There are at least eleven (11) little known traditional papal documents that focus on today’s Social Justice and Economic Democracy issues (i.e., Socialism, Communism, Americanism, and Christian Democracy) in the context of the Kingdom of Christ.

In 1901, in the context of Social Justice and Economic Democracy, Pope Leo XIII wrote:

“What Social Democracy is and what Christian Democracy ought to be, assuredly no one can doubt. The first, with due consideration to the greater or less intemperance of its utterance, is carried to such an excess by many as to maintain that there is really nothing existing above the natural order of things, and that the acquirement and enjoyment of corporal and external goods constitute man's happiness. It aims at putting all government in the hands of the masses, reducing all ranks to the same level, abolishing all distinction of class, and finally introducing community of goods. Hence, the right to own private property is to be abrogated, and whatever property a man possesses, or whatever means of livelihood he has, is to be common to all.”  (Graves De Communi Re, paragraph 5)

“As against this, Christian Democracy, by the fact that it is Christian, is built, and necessarily so, on the basic principles of divine faith, and it must provide better conditions for the masses, with the ulterior object of promoting the perfection of souls made for things eternal. Hence, for Christian Democracy, justice is sacred; it must maintain that the right of acquiring and possessing property cannot be impugned, and it must safeguard the various distinctions and degrees which are indispensable in every well-ordered commonwealth. Finally, it must endeavor to preserve in every human society the form and the character which God ever impresses on it. It is clear, therefore, that there is nothing in common between Social and Christian Democracy. They differ from each other as much as the sect of socialism differs from the profession of Christianity.”  (Graves De Communi Re, paragraph 6)

In 1922, in the context of The Kingdom of Christ, Pope Pius XI elaborated extensively on the aftermath of World War I and commented in pertinent part:

“There is a species of moral, legal, and social modernism which We condemn, no less decidedly than We condemn theological modernism.”  (Ubi Arcano Dei Consilio, On the Peace of Christ in the Kingdom of Christ, paragraph 61)

“The Church does not desire, neither ought she to desire, to mix up without a just cause in the direction of purely civil affairs. On the other hand, she cannot permit or tolerate that the state use the pretext of certain laws of unjust regulations to do injury to the rights of an order superior to that of the state, to interfere with the constitution given the Church by Christ, or to violate the rights of God Himself over civil society.”  (Ubi Arcano Dei Consilio, On the Peace of Christ in the Kingdom of Christ, paragraph 65)

Note that these papal documents include Pope Leo XIII’s 1899 warning concerning new opinions, virtue, nature and grace with regard to Americanism.

What is a papal document?  It is a focused doctrinal or moral pronouncement written, dated, signed, and promulgated by a Catholic pope.  These pronouncements are essentially epistles written by the apostolic successors to Peter.  Arguably, traditional papal documents were promulgated prior the opening of the Second Vatican Council on October 11, 1962.

Arguably, the focus of contemporary Catholic seminaries can be attributed to The Fruits of Radical Catholic Modernism – a radical philosophy  espoused by Saul David Alinsky in Reveille For Radicals (originally published 1946) and Rules for Radicals (originally published 1971).  It should be noted that The Fruits of Radical Catholic Modernism was endorsed and reposted by a respected and well known retired Catholic Bishop.

Buried in the Alinsky ruckus are forty-five (45) goals of communism originally articulated in 1958 (prior to the Second Vatican Council) by W. Cleon Skousen.  These forty-five goals were subsequently published in the United States Congressional Record on January 10, 1963.  Many of these forty-five communist goals are very relevant – but two goals are particularly chilling:

Communism Goal 27:  Infiltrate the churches and replace revealed religion with "social" religion. Discredit the Bible and emphasize the need for intellectual maturity which does not need a "religious crutch."

Communism Goal 42 – Create the impression that violence and insurrection are legitimate aspects of the American tradition; that students and special-interest groups should rise up and use “Union of force” to solve economic, political or social problems.

“So-called “urban revolution” was preached on many college campuses during the riotous 1960s, and after. Various groups that formed during this period included such extreme activists as the Students for a Democratic Society (SDS), the Weathermen, the Weather Underground, the Black Panthers, the Symbionese Liberation Army, and others.

“In 1971, Saul Alinsky’s new book, Rules for Radicals, gave activist groups step-by-step instructions on how to organize segments of society to push their socialist agenda.

“A key to winning popular support for socialism during those tumultuous times was to rename its various goals. Catch-words and phrases began to circulate and become popularized such as “social justice” (all things in common), “progressivism” (erase the Constitution), “economic democracy” (take from productive people, give to unproductive people), “work-place democracy” (unions controlling owners’ private property), “environmental justice” (anti-human policies, and global warming doctrine), “assault weapons” (anti-gun term), “living wage” (wage control), “abortion rights” (slaughter of the unborn), “homophobic” (unhealthy fear of homosexuality), “undocumented workers” (illegal immigrants), “anti-choice” (people with traditional or Biblical values regarding abortion), “gender reassignment” (sex change), etc. Today there is a new obscenity in the culture—a new “anything goes” that has replaced normal restraint and self-governance. Among increasing numbers of communities there is an accepted disrespect for traditional decent and good, and an accepted respect for a degraded kind of “good.”

“From violent demonstrations to people with ulterior motives quietly working from within the system, this destructive movement against families has risen to prominence and influence. It has Union of disparate forces with its many slogans, phrases and words to establish anti-family and anti-Judeo-Christian beachheads in all levels of society—from day care centers to the White House.”

A diligent search also found an English translation of The Oath Against the Errors of Modernism in the 30th edition of Denzinger’s The Source of Catholic Dogma (numbered paragraphs 2145-2147).  Moving on…

When studying contemporary issues there are also at least eleven (11) relevant traditional papal documents that focus on contemporary Social Justice and Economic Democracy issues.  These documents can help us better understand this day in history and help guide us in the restoration of our once great nation.  Chronologically, these traditional Social Justice and Economic Democracy documents include:

English translations of the preceding eleven (11) Social Justice and Economic Democracy papal documents were available online at the time this was written.

Realistically, we cannot be expected to read or digest all of these traditional papal documents in one sitting or even in one day or one week.  Most of these papal documents can be read in a half hour or less; very few of these documents will take up to an hour to read.  It therefore behooves us to establish a daily reading program to familiarize ourselves with the above referenced documents.  Reading one papal document a day is reasonable.

That being said, we can still stop and reverse the evolution of the Union of Socialist States of America (USSA).

First, we must pray and pray – and pray some more.

Second, text and tweet no more – read and read, and read some more.  We must all reeducate ourselves before it is too late.

[Comment Guidelines - Click to view]
The Remnant values the comments and input of our visitors. It’s no secret, however, that trolls exist, and trolls can do a lot of damage to a brand. Therefore, our comments are heavily monitored 24/7 by Remnant moderators around the country.  They have been instructed to remove demeaning, hostile, needlessly combative, racist, Christophobic comments, and streams not related to the storyline. Multiple comments from one person under a story are also discouraged. Capitalized sentences or comments will be removed (Internet shouting).
The Remnant comments sections are not designed for frequent personal blogging, on-going debates or theological or other disputes between commenters. Please understand that we pay our writers to defend The Remnant’s editorial positions. We thus acknowledge no moral obligation whatsoever to allow anyone and everyone to try to undermine our editorial policy and create a general nuisance on our website.  Therefore, Remnant moderators reserve the right to edit or remove comments, and comments do not necessarily represent the views of The Remnant.
back to top
Last modified on Saturday, April 30, 2022
Tweet
More in this category: « WOKE CATHOLICS: Cancelling the 10 Commandments ELON MUSK: A Lost Boy in Post-Christian Neverland »