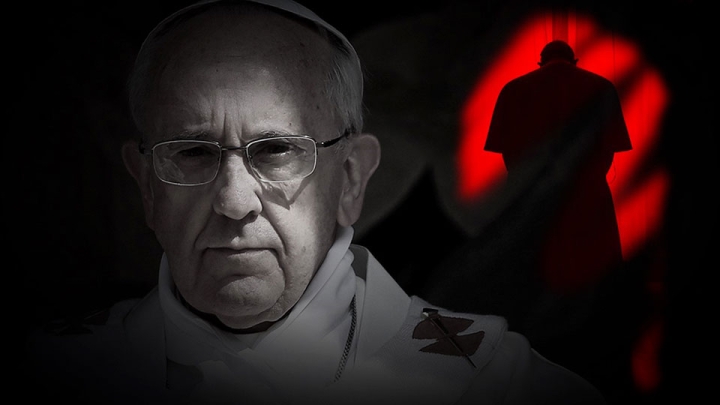 Like most of his writings, Bergoglio’s recent apostolic letter, Desiderio Desideravi, is so full of pseudo-Catholic gaslighting that it should be avoided by almost every Catholic wishing to preserve peace of soul. In it, he attempts to convince his “dearest sisters and brothers” that his great love for the Mass prompts him to call all souls to be spiritually nourished through its faithful celebration. One almost forgets that he is writing the letter to justify his vicious persecution of those who actually seek to make the Tridentine Mass the center of their lives.

Setting this aside, though, Bergoglio does provide a great service to faithful Catholics in paragraph 5 (out of 65), in which he casually reveals his delusional view of the Church’s role in the work of salvation:

“The world still does not know it, but everyone is invited to the supper of the wedding of the Lamb (Re 19:9). To be admitted to the feast all that is required is the wedding garment of faith which comes from the hearing of his Word (cf. Ro 10:17). The Church tailors such a garment to fit each one with the whiteness of a garment bathed in the blood of the Lamb. (Re 7:14).”

Just as a tailor will adjust the garment to fit the one who wears it, Bergoglio’s church of accompaniment adjusts Catholic teaching to fit the circumstances of the unrepentant sinner.

So, according to Bergoglio, the Church tailors “the wedding garment of faith” to fit each sinner. Even if apologists for Bergoglio and the Spirit of Vatican II (i.e., sophists) can scavenge a seemingly Catholic interpretation for this notion of the Church “tailoring” the wedding garment to fit each soul, we have witnessed (for nine long years) the decisively anti-Catholic meaning Bergoglio attaches to this concept.

Just as a tailor will adjust the garment to fit the one who wears it, Bergoglio’s church of accompaniment adjusts Catholic teaching to fit the circumstances of the unrepentant sinner. Gone is the idea that we need to change our lives to remain in the state of sanctifying grace by following God’s commandments; now Bergoglio and his accomplices set aside God’s commandments and simply declare that those who want to be clean are clean (although this may not apply to rigid traditional Catholics).

At first glance, we may miss the rationale for including this concept of “tailoring” in a letter about the Mass. But Bergoglio implicitly linked the question of the unrepentant sinner to the Mass with his Amoris Laetitia, as we see from the first question of the still-unanswered 2016 Dubia of Cardinals Brandmüller, Burke, Caffarra, and Meisner:

“It is asked whether, following the affirmations of ‘Amoris Laetitia,’ it has now become possible to grant absolution in the Sacrament of Penance and thus to admit to Holy Communion a person who, while bound by a valid marital bond, lives together with a different person ‘more uxorio”’ (in a marital way) without fulfilling the conditions provided for by ‘Familiaris Consortio’ . . . ”

With his Desiderio Desideravi, Bergolgio has added delusional eloquence to the various other proofs that he has abandoned the true Faith.

Bergoglio never answered the Dubia directly. But we knew from his silence, and continued abuses of the Faith, that he thinks the Church should abandon the “antiquated" notions espoused by the Dubia Cardinals.

With his Desiderio Desideravi, Bergolgio has added delusional eloquence to the various other proofs that he has abandoned the true Faith: in his apostate world, the Church tailors the wedding garment of Faith to fit the unrepentant sinner.

Does Bergoglio sincerely believe that he can compel God to open the doors of Heaven wider to welcome all the souls he and his fellow wolves have led astray? Whether he does or not, we can see that by allowing unrepentant sinners such as Biden and Pelosi to receive Communion, he falsely teaches the world that the Church no longer expects souls to resist the immoral pressures of the New World Order. Thus, by deceiving Catholics, Bergoglio leads souls to hell and paves the way for the globalists, who need weak souls to acquiesce to their diabolical demands.

As such, it is no mere coincidence that Bergoglio and the globalists want to ban the Mass that leads Catholics to consider the gravity of sin and our need to be cleansed from it. The so-called Ottaviani Intervention of 1969 summarized this particular difference between the Tridentine Mass and Novus Ordo as follows:

“Instead of putting the stress on the remission of sins of the living and the dead, [the Novus Ordo Missae] lays emphasis on the nourishment and sanctification of those present.”

Bergoglio (the most prominent fruit of the Novus Ordo) eradicates the idea of worthiness by asserting a person’s reception of Communion means Jesus desired him or her to receive it.

Everything about the Tridentine Mass reinforces the reality that we are sinners in great need of God’s mercy and must receive Holy Communion worthily. As we know concretely from over fifty years of tragic experience, the Novus Ordo is highly deficient in this regard. Indeed, Bergoglio (the most prominent fruit of the Novus Ordo) eradicates the idea of worthiness by asserting a person’s reception of Communion means Jesus desired him or her to receive it: “[E]very reception of communion of the Body and Blood of Christ was already desired by Him in the Last Supper.” (paragraph 6 of Desiderio Desideravi)

The Freemasons and globalists planned this diabolical revolution before Bergoglio was even ordained. They knew from Satan that they cannot destroy the Church completely, so they have attempted to repurpose it to support their designs. Bishop Rudolf Graber wrote of this in his 1974 Athanasius and the Church of Our Time (citing the 1964 work of Yves Marsaudon, a Freemason):

“The goal is no longer the destruction of the Church but rather to make use of it by infiltrating it.”

This is precisely what we see today, and those who remain silent about the errors afflicting the Church are the greatest assets of the infiltrators. Their tacit approval of the destruction of the Church testifies powerfully (though falsely) that the Faith has changed into something that contradicts what it once was. The world and Church are on the brink of the abyss because the false shepherds have had almost free rein since Vatican II.

As for Bergoglio, we should pray for his conversion, for he could become a great saint if he fought for God’s truth as hard as he fights for the globalist lies.

But God is allowing us at least this day — for we are not promised a tomorrow — to fight valiantly for His Church. We need prayer and penance. We need Our Lady, especially devotion to her Immaculate Heart and fervent recitation of the Rosary. And those in positions of influence within the Church — especially faithful bishops — must stand up and fight.

As for Bergoglio, we should pray for his conversion, for he could become a great saint if he fought for God’s truth as hard as he fights for the globalist lies. Until he converts, though, Catholics have a duty to resist him and his demonic allies. If we refuse to do that, we cannot possibly expect God to rescue us from the hell on earth that Satan and his globalists have planned for us. Our Lady, destroyer of all heresies, pray for us! St. Michael the Archangel, defend us in battle!

[Comment Guidelines - Click to view]
The Remnant values the comments and input of our visitors. It’s no secret, however, that trolls exist, and trolls can do a lot of damage to a brand. Therefore, our comments are heavily monitored 24/7 by Remnant moderators around the country.  They have been instructed to remove demeaning, hostile, needlessly combative, racist, Christophobic comments, and streams not related to the storyline. Multiple comments from one person under a story are also discouraged. Capitalized sentences or comments will be removed (Internet shouting).
The Remnant comments sections are not designed for frequent personal blogging, on-going debates or theological or other disputes between commenters. Please understand that we pay our writers to defend The Remnant’s editorial positions. We thus acknowledge no moral obligation whatsoever to allow anyone and everyone to try to undermine our editorial policy and create a general nuisance on our website.  Therefore, Remnant moderators reserve the right to edit or remove comments, and comments do not necessarily represent the views of The Remnant.
back to top
Last modified on Friday, July 8, 2022
Tweet

More in this category: « VIGANÒ’S DECLARATION regarding the apostolic letter “Desiderio Desideravi” TOO LITTLE TOO LATE: Francis Responds to Dobbs Decision »