Is the Demonic Globalist Religion Now Inseparable from Biden’s State? 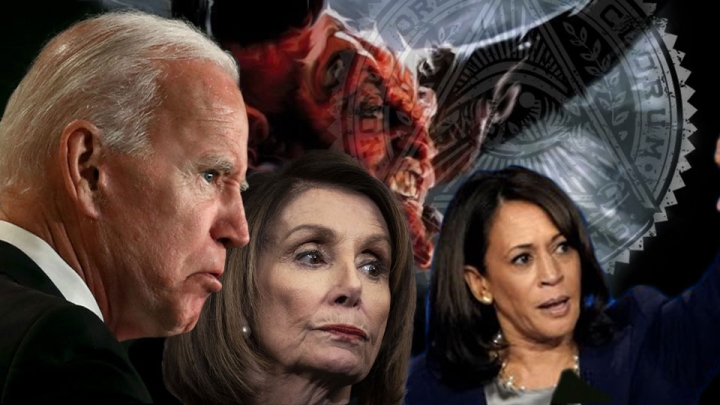 In his October 19, 2022 opinion piece in the Wall Street Journal, Daniel Henninger predicted a red wave victory for the Republicans in the upcoming midterm elections. Indeed, if we simply consider the most pressing election issues Henninger described, we might expect all informed voters to vote for Republicans:

“What, exactly, are these midterm elections about? The 500-pound bear in the room is inflation. Still, I don’t recall another recent midterm when so many discrete issues were filtering through voters’ minds. Crime, abortion, recession, energy prices, the border, schools, Ukraine and, not least, Joe Biden.”

With the exception of the abortion issue, which divides Americans, every issue involves Biden and his party clearly opposing the interests of the United States and its citizens. If Biden and his party had to be honest, they would tell us that their handlers require them to subordinate the interests of the United States to those of the globalists. But if they told the truth we would recognize that they are traitors. As such, they cannot openly and honestly tout their accomplishments or plans for America.

In case we had any doubt, Biden’s stance on Covid vaccines confirms his allegiance to the demonic globalist religion.

So if they cannot campaign on the actual issues voters care about, what do Biden and his Democrats want voters to focus on instead? He gave us the answer in three recent Twitter posts:

“MAGA forces are determined to take this country backwards. Backwards to an America where there is no right to choose, no right to privacy, no right to contraception, no right to marry who you love. We can’t let that happen.” (October 19, 2022)

“We must elect more Democrats to the Senate and keep control of the House. If we do that, here’s the promise I make to you and the American people: The first bill I send to Congress will be to codify Roe v. Wade. And when Congress passes it, I will sign it in January.” (October 18, 2022)

In varying degrees, each of the progressive “rights” Biden embraces has religious implications; and each contributes to the primary globalist objective of controlling and reducing the world’s population. Is this a mere coincidence?

Thus we can reconcile the apparent contradiction once we realize that the demonic globalist religion only champions rights that reduce the world population.

In case we had any doubt, Biden’s stance on Covid vaccines confirms his allegiance to the demonic globalist religion. If we saw Biden’s rhetoric solely in terms of the rights he apparently champions, we could not understand why he would mandate Covid vaccines which do not prevent the transmission of Covid. Clearly such mandates violate the “right to privacy” and go against the “my body, my choice” mantra of the abortionists. But the Covid vaccines, along with the other Covid response measures, have reportedly led to increased excess mortality rates throughout the world. Thus we can reconcile the apparent contradiction once we realize that the demonic globalist religion only champions rights that reduce the world population.

“These are not modified images or changes in presentation; they are exactly what was broadcast to the nation. It looks straight up evil. Like something out of a hellscape theatrical production intended to showcase Baal as the ‘soul of the nation.’ On one hand, this is the realistic tone of the Biden administration. But on the other hand, you would not expect to see this harsh dictatorship enhanced with the backdrop to give it such angered imagery. I have never seen anything even close to this in a presidential address.” (Conservative Treehouse, September 1, 2022)

Americans now find themselves in a nation in which all citizens are increasingly required to adhere to the oppressive religious requirements of the Biden state. More and more, the demonic globalist religion espoused by Biden tells us what we must think and do, and what we cannot think or do. Not only are we punished for expressing our Christian beliefs in public, we are increasingly punished for not expressing anti-Christian beliefs in public. Even in so-called “intolerant” Catholic countries prior to Vatican II, non-Catholics were not required to practice the state religion to the same extent that Americans are required to adhere to the religious requirements imposed by Biden and his progressive allies.

And Biden wants to make it clear that there are real consequences if we do not follow the demonic globalist religion. In the weeks following his “battle for the soul of the nation” speech, Biden’s Department of Justice and FBI went after pro-life advocates like Mark Houck. As we can sense from Mrs. Houck’s description, the entire operation against her husband was choreographed to induce terror for all Christians in America:

“Ryan-Marie, who is a homeschooling mother, described how the SWAT team of 25 to 30 FBI agents swarmed their property with around 15 vehicles at 7:05 a.m. this morning. Having quickly surrounded the house with rifles in firing position, ‘they started pounding on the door and yelling for us to open it.’” (LifeSiteNews, September 23, 2022)

Others have now faced similar attacks from the FBI for their pro-life advocacy. All of this takes place while Biden and his progressive allies have refused to protect communities from violent criminals. The message is clear: if you try to stop Biden and the globalist demons from spilling innocent blood, they will try to annihilate you.

This is how they enforce their demonic religion. Even if we find ourselves in a rural or conservative enclave, we can smell the stench of the approaching demons who want to rend our families and damn our souls. They do not even want us to hide — they demand that we surrender or be devoured.

Are we willing to bet our families and our nation on God giving us another opportunity to oppose the demonic globalist religion if we cannot rouse ourselves to fight as true Christians?

But as Michael Matt concluded in his recent Remnant TV video, this persecution is a sign that we can still fight. God would not be permitting this if He did not want to draw good from it. Mr. Matt quoted St. Jerome’s holy wisdom on persecutions like the one we face:

“You are deceived if you think a Christian can live without persecution. He suffers the greatest persecution of all who lives with none . . . A storm puts a man on guard and obliges him to exert the utmost efforts to avoid shipwreck.”

The storm of Biden’s demonic globalist religion should lead all Christians to realize that we will lose everything we hold dear if we do not “exert the utmost efforts to avoid shipwreck.” God may be giving us this one final opportunity to turn to Him with true devotion and confidence. Are we willing to bet our families and our nation on God giving us another opportunity to oppose the demonic globalist religion if we cannot rouse ourselves to fight as true Christians?

Given the current state of Biden’s America, one would think that the upcoming midterm elections would result in an overwhelming landslide for the Republicans. But Biden and his globalist allies serve Satan, a powerful commander who can only be countered by those who fight for Jesus Christ. If we do not stand up and fight for Christ the King as though our lives depend upon it, we will wake up to find that our families and nation have been torn asunder and made subject to the demonic globalist religion. If that happens we will have deserved it.

May the Blessed Virgin Mary help us to give everything to fight for the reign of Christ the King! Immaculate Heart of Mary, pray for us!

RELATED commentary from RTV — GLOBALISM'S EXORCISM: Why These US Midterms Matter

[Comment Guidelines - Click to view]
The Remnant values the comments and input of our visitors. It’s no secret, however, that trolls exist, and trolls can do a lot of damage to a brand. Therefore, our comments are heavily monitored 24/7 by Remnant moderators around the country.  They have been instructed to remove demeaning, hostile, needlessly combative, racist, Christophobic comments, and streams not related to the storyline. Multiple comments from one person under a story are also discouraged. Capitalized sentences or comments will be removed (Internet shouting).
The Remnant comments sections are not designed for frequent personal blogging, on-going debates or theological or other disputes between commenters. Please understand that we pay our writers to defend The Remnant’s editorial positions. We thus acknowledge no moral obligation whatsoever to allow anyone and everyone to try to undermine our editorial policy and create a general nuisance on our website.  Therefore, Remnant moderators reserve the right to edit or remove comments, and comments do not necessarily represent the views of The Remnant.
back to top
Last modified on Monday, October 24, 2022
Tweet

More in this category: « GLOBALISM'S EXORCISM: Why These US Midterms Matter The Vatican’s 3rd Deal with the Devil »