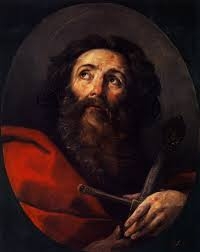 When Universal Society of Hinduism President Rajan Zed recited prayers for the state senate's March 3 session in Boise, Senator Sheryl Nuxoll boycotted the invocation and said that she believed the US is a Christian nation and "Hindu is a false faith with false gods".

Her opinions "do not represent the opinions or teachings of the Roman Catholic Church, (Boise) Bishop Peter Christensen or even our Holy Father, Pope Francis, who has been an outspoken supporter of ecumenical and inter-religious dialogue," a statement from the Boise Diocese said on Friday. READ MORE HERE

REMNANT COMMENT: I wonder if St. Paul would still "represent the opinions of Pope Francis" according the Bishop Christensen. It was Paul, after all, who noted in his first letter to the Corinthians that "the things which the heathens sacrifice, they sacrifice to devils, and not to God. And I would not that you should be made partakers with devils."

I guess we've evolved since then, right?  Paul the Rad Trad, on the other hand, is no longer relevant since he never read the 16 documents of Vatican II.

[Comment Guidelines - Click to view]
The Remnant values the comments and input of our visitors. It’s no secret, however, that trolls exist, and trolls can do a lot of damage to a brand. Therefore, our comments are heavily monitored 24/7 by Remnant moderators around the country.  They have been instructed to remove demeaning, hostile, needlessly combative, racist, Christophobic comments, and streams not related to the storyline. Multiple comments from one person under a story are also discouraged. Capitalized sentences or comments will be removed (Internet shouting).
The Remnant comments sections are not designed for frequent personal blogging, on-going debates or theological or other disputes between commenters. Please understand that we pay our writers to defend The Remnant’s editorial positions. We thus acknowledge no moral obligation whatsoever to allow anyone and everyone to try to undermine our editorial policy and create a general nuisance on our website.  Therefore, Remnant moderators reserve the right to edit or remove comments, and comments do not necessarily represent the views of The Remnant.
back to top
Last modified on Wednesday, March 25, 2015
Tweet

More in this category: « Here's One For You: Yoga Stations Of The Cross The Red Carpet: Pope to Address President, Congress and the United Nations »